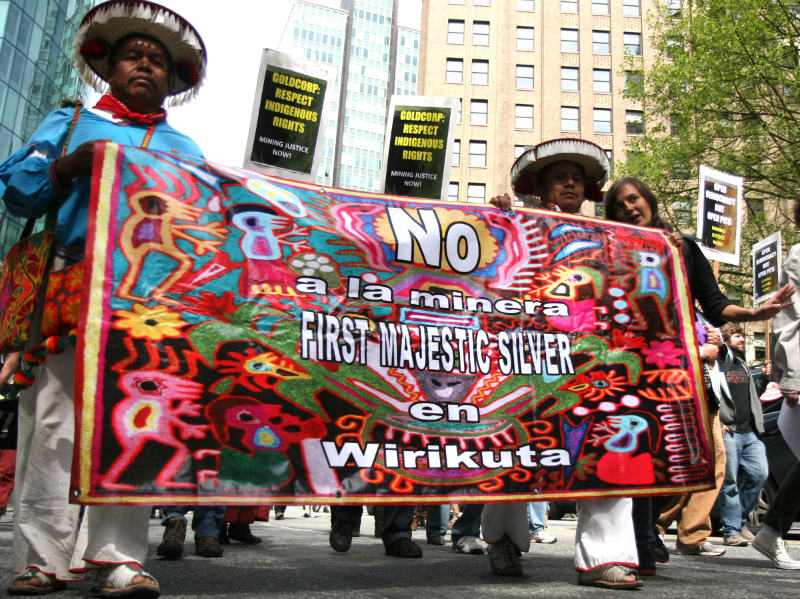 Photo by Trevor Kehoe
Support our journalism. Become a Patron!

From May 14-19, Indigenous representatives gathered in Vancouver, BC., for Mining Justice Week, a six-day event organized by the Mining Justice Alliance to call attention to the social and environmental impacts of Vancouver-based mining companies operating abroad. Trevor Kehoe, a journalist currently based out of Vancouver, reports.

Indigenous representatives from Latin America were in Vancouver the week of May 16 speaking out on Canadian mining companies and the negative impacts operations are having on local communities.

Human rights violations, environmental degradation, bribery, intimidation and disregard for local villages and indigenous populations are alleged to have occurred at the hands of publicly shared operations with home bases in Vancouver.

As part of the Mining Justice Alliance Mining Justice Week, indigenous leaders are asking to be heard by Canadians, company shareholders and politicians with their community concerns that they say have largely been ignored by the mine operators and local officials.

Questions are once again being raised as to what standards Canadian companies should be held to while operating on foreign soil.

“For indigenous populations, territory and land is not for sale. The land is Mother Earth, it protects us and gives us life. Companies like Goldcorp come into our community, they destroy the environment with open pit mining, consume and contaminate our water with clear evidence of health impacts,” said Benito Morales, a human rights co-ordinator and lawyer for the Rigoberta Menchu Tum Foundation in Guatemala.

“Your Canadian Pension Plan (CPP) invests in these companies and as Canadians you have a moral commitment in this issue.”

The CPP and mining firms Goldcorp and First Majestic Silver were the target of protests May 18 and 19 in a hope to spur dialogue and raise awareness of the issues facing indigenous communities.

Physicians have found higher than normal levels of lead in blood, arsenic in urine and from the start locals have said they didn’t have prior, complete, free and informed consultation before the digging began.

Without prior consultation with indigenous populations, mine operators effectively ignored Convention 169 of the International Labour Organization and the United Nations Universal Declaration of Human Rights.

The company has defied shut down recommendations to close the mine from numerous respected international experts and human rights organizations including the IACHR, the Committee of Experts of the International Labour Organization, the World Bank’s Compliance Advisor Ombudsmen and even Goldcorp’s own May 2010 Human Rights Assessment.

Protests were held at Goldcorp’s AGM on May 18 with a resolution in front of shareholders to suspend all mining activity in Guatemala in compliance with the IACHR’s precautionary measures.

The resolution on the Marlin Mine was shot down by a 94 per cent vote margin.

“As well as being added to the Dow Jones Sustainability Index, we are developing ongoing partnerships and operating our mines in responsible and sustainable ways.”

Goldcorp also released a statement after the AGM arguing against the IACHR’s recommendations to shut down the mine.

“With respect to the Inter-American Commission on Human Rights, Goldcorp strongly believes the IACHR’s action is based on environmental allegations that are demonstrably without merit. The government’s responses to the IACHR expressly confirm that studies conducted by the Ministry of Energy and Mines, the Ministry of Health and Social Welfare, and the Ministry of Environment and Natural Resources in Guatemala demonstrate there is no evidence of pollution or ill effects to public health or the environment as a result of operations at Marlin. These findings are supported by independent, third-party experts who have been commissioned by Goldcorp to test ground water at our mines on a quarterly basis.”

Morales stated that multinational firms like Goldcorp generally have free reign in Latin America due to corrupt local officials and little in the way of environmental protection.

“In my opinion the state is the worst enemy here. If it’s not Goldcorp mining here its another company,” he said through a translator.

“Politically there is fertile soil for transnational organizations to gain access in a corrupt local state like Guatemala.”

The mine has been the source of conflict within the local community causing violence between protesters and employees.

The issue came to a head most recently on Feb. 28 when peaceful protests against the mine turned violent. Local reports say community members were detained and beaten by employees of the mine.

Actions from a Goldcorp mine in Honduras brought speakers from the Latin American country to get Canadians attention on environmental damages occurring near the San Martin mine in the Siria Valley.

International researchers from the University of Newcastle found acid mine drainage with dangerously high levels of poisons traceable to Goldcorp during the mine’s 10 year run.

With reclamation and closure activities now taking place at the mine, locals believe they will be left with the mess to clean up after the company leaves.

“The Canadian population has a responsibility here and cannot be indifferent to the problems in the south.”

Goldcorp announced their profits more than doubled in the first quarter of 2011 with reported net earnings at $651 million.

Vancouver based First Majestic Silver and their proposed mine in the sacred territory of Wirikuta in Mexico was also a topic of discussion and protest during the conference.

The Wirikuta area is one of the most important sacred natural sites of the Wixarika indigenous people.

The area is a UN UNESCO Global Sacred Natural Site, under consideration as a UNESCO World Heritage Site and has already been declared one of 14 culturally and environmentally important sites worldwide under the UN’s culture based Environmental Conservation for Sustainable Development Program. It has been named by the World Wildlife Fund as one of the worlds top three deserts for cactus species diversity and declared a protected area in 1994 by the government of San Luis Potosi.

First Majestic under the subsidiary of Minera Real de Bonanza, S.A. de C.V. has yet to break ground on the mining project, but the Mexican government has granted 22 concessions that span over 6,000 hectares in the Wirikuta area.

The Canadian government has yet to take action on regulating national mining firms on international territory.

Bill C-300 was introduced into the House of Commons in 2009 and would have been a good first step at enforcing guidelines for Canadian mining companies overseas but was shot down by a largely Conservative block vote.

“In some cases there is a serious violation of due process. It’s not sufficient to allow companies to regulate themselves because it just doesn’t happen.”

Thanks to Trevor Kehoe for the report.