Warriors of the Aboriginal Resistance

Australia’s national flag is a symbol of colonization and all the evils accompanying it – the genocide, the dispossession, the blood shed by our ancestors. The Warriors of the Aboriginal Resistance (WAR) hold no affinity to this flag.

In the month running up to the G20 summit in Brisbane, four Aboriginal people died in police custody, many more Aboriginal children were forcibly removed from their families and mining companies continued to devastate sacred Aboriginal lands. Aboriginal people are incarcerated at five times the rate of Blacks under apartheid in South Africa, Australia leads the world in linguicide, our life expectancy is still more than 10 years below that of Australians, and John Howard’s racially discriminatory intervention into Northern Territory Aboriginal communities has been extended for another decade. We remain a fourth world people residing within the borders of a first world nation. Our people live in third world conditions and have had our self-determination suppressed by the colonial state. Consecutive Australian governments have failed us, and consecutive Australian governments blame us for our predicament. The Australian flag does not represent freedom. But burning the Australian flag is an act of defiance, a symbol of our fight for freedom. The burning of the Australian flag is our message to Australia and the world to say that we are still here, that the denial of our basic human rights continues, and that radical change must occur.

Like its predecessor the Union Jack, the Australian flag is a bastion of colonial arrogance. Burning the Australian flag is an act of anti-colonial resistance. We do not wish to coexist with the colonial state. Our ultimate goal is to bring an end to colonial control of our lands and lives, the restoration of tribal sovereignty. We resist colonization just as the Natives of North America, the Maori of Aotearoa and the Indigenous peoples of South America. Like Scottish nationalists and the West Papuans, we fight for freedom and independence. We will fight to rid our people and our communities of the interfering and oppressive hands of the colonial Australian state. We are shifting to an agenda of asserting our fundamental rights and responsibilities as Indigenous peoples. We will no longer ask for justice from the colonizer, we will simply take it.

WAR member Ruby Wharton (Kooma/Gamilaraay) set fire to one of the six Australian flags on November 16 at the final Aboriginal protest against the #Genocidal20 summit. “Every action has an equal and opposite reaction,” says Ms Wharton.

“Mr Abbott asked for his nation’s flag to be burned when he publicly insulted the Aboriginal people. The Australian government asked for us to burn their flag when they stole our children and killed our people. We wouldn’t have done it if there was no reason.”

Meriki Onus (Gunnai/Gunditjmara), another founding member of WAR, says she burned the Australian flag because of how colonization has impacted on her family and community.

“We’ve been denied the knowledge of our traditions, culture and language as a direct result of the massacres of our ancestors and the herding of our people into missions in so-called Gippsland (Victoria). This happened under the Australian flag. Today, the Australian nation benefits directly from those acts of genocide. I now encourage everyone, Aboriginal and non-Aboriginal, to burn the Australian flag in an act of resistance to what it truly stands for.”

Effigies of handpicked Aboriginal so-called ‘leaders’ were also burned at the rally. WAR rejects that this was an act of ‘lateral violence’. This term is often used by a minority of Aboriginal people to detract from the wrongs they commit. Noel Pearson, Marcia Langton and Warren Mundine have become part and parcel of the colonial machine, perpetuating the oppression of Aboriginal people and dispossession of our lands. Burning their effigies was an attack on their selling out of our people, not an attack on their right to identify as Aboriginal.

Bogaine Skuthorpe-Spearim (Gamilaraay/Kooma/Murrawarri) says we as Aboriginal people “must always question the motive behind the words and actions of those who have taken so much from us”.

“We as Indigenous peoples always had the responsibility to pull our own mob into line if they did wrong, and we still have that responsibility today. Warren Mundine, Noel Pearson and Marcia Langton have and continue to work hand in hand with a government guilty of forcing us off our lands, kidnapping our young ones, killing our brothers and sisters in prison, cutting off water in our communities and demonizing our people in the public eye.” 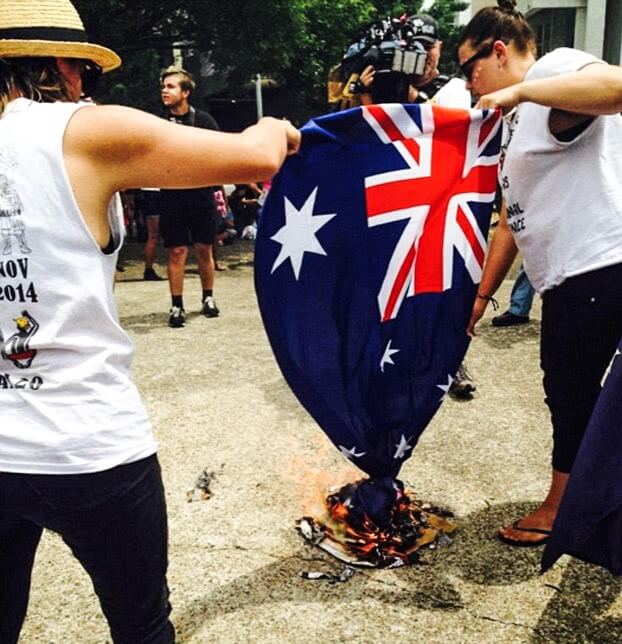