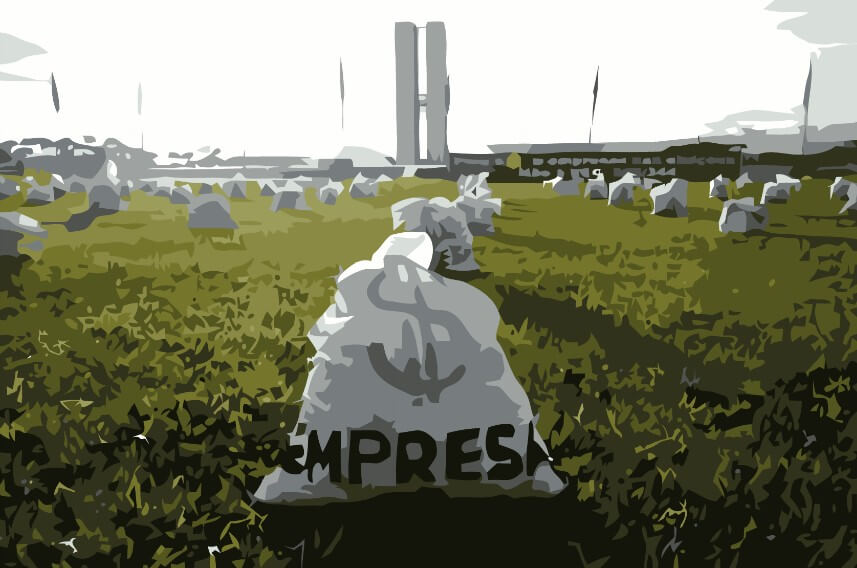 Who finances the congressional representatives against protected areas in Brazil?

March 24 - Scores of bags with "$ business" dot the lawn at Brasilia in protest of money in politics as popular awareness continues to grow (Original Photo: Adital)
Support our journalism. Become a Patron!

The Social and Environmental Policies Portal

Not surprisingly, of the nearly 50 members listed in the Special Commission to review the proposed constitutional amendment (PEC) 215/2000, at least 20 had their election campaigns financed by large agribusiness, mining, energy, timber companies and banks. PEC 215 transfers from the federal government to Congress the power to demarcate indigenous lands, to grant title for the Quilombola areas and to create Units of Conservation (UCs). In practice, if approved, the project would mean the definitive paralysis of making these protected areas official.

Some parliamentarians, individually, received more than R$1 million [approx US$310,000] from companies connected to these sectors. JBS alone financed seven deputies who are on this Special Committee, totaling more than R$2 million in donations. The data cited is from the Superior Electoral Court (TSE-Tribunal Superior Eleitoral), collated by the newspaper Estado de S. Paulo. Parliamentarian and rancher, Dilceu Sperafico (PP-PR) pocketed R$900,000 from JBS and R$792,000 from Galvão Engenharia, a contractor investigated in Operation Lava Jato. Companies like Odebrech, Andrade Gutierrez and Queiroz Galvão, also investigated by Operation Lava Jato, made hefty donations to lawmakers who have attacked the Brazilian protected areas. We are talking about more than R$10 million officially donated and declared to the TSE.

The Chairman of the Special Commission on the PEC 215, Rep. Nilson Leitão (PSDB-MT), had 60% of his 2014 campaign paid for with funds from Galvão Engenharia and 30% by the Maggi family businesses (automotive, truck and agricultural machinery). He assumed leadership of the commission on Tuesday, March 17, and highlighted that a period of two months will be given to vote on the bill, “in the name of democracy”. After the meeting, Leitão confessed that “could be finished with it (the discussion of the PEC) at the same time”, introducing for approval the report that Rep. Osmar Serraglio (PMDB-PR) presented to the last legislative session.

Serraglio, also financed with resources from JBS, returned as Rapporteur for PEC 215. In the previous legislative session, the proposal was shelved and the report was not voted on, under pressure from the indigenous and socio-environmentalist movement. The bill was reintroduced at the request of the agribusiness bloc (ruralistas) in February this year.

Representatives Luis Carlos Heinze (PP / RS), Jerônimo Goergen (PP-RS) and Dilceu Sperafico (PP-PR) were cited and will be investigated in Operation Lava Jato. Heinze is one of the major ruralista leaders in Congress, was the president of the Agriculture Livestock Parliamentary Front (FPA), the ruralista (agribusiness) bloc in the National Congress. Last year, he was the target of a criminal complaint by indigenous organizations in the Supreme Court (STF-Superior Tribunal Federal) and representation in the Attorney General’s Office (PGR) for his having encouraged farmers to use armed security guards to expel indigenous peoples from lands.

Congressman Goergen, current coordinator of the FPA, received about R$ 1.6 million in sponsorship from companies connected to agribusiness. More than 50% (R$850,000) came from JBS and a small amount (R$100,000) from Andrade Gutierrez, one of the contractors (major construction -hydroelectric dams, etc.) named in Operation Lava Jato. Goergen himself made headlines for an aggressive speech against indigenous rights. In 2013, he was accused (PT) by four party colleagues – including Heinze – of “influence peddling” for disclosing as his responsibility the release of the Ministry of Cities resources to municipalities in Brazil’s southern states.

According to the Inter-Parliamentary Advisory Department (Diap-Departamento Intersindical de Assessoria Parlamentar), a congressman can be considered a ruralista when, “although not a landowner or active in the agribusiness area, offhandedly assumes the defense of claims of the bloc, not only in plenary and in committee, but in press conferences and other public events”. Generally, such interests are opposed to land reform, environmental issues and indigenous rights”.

Listing of who is on the Special Commission on PEC 215 can be found here (PT)
Article (PT) originally published at portalambiental.org.br. Translated to English for Intercontinental Cry.