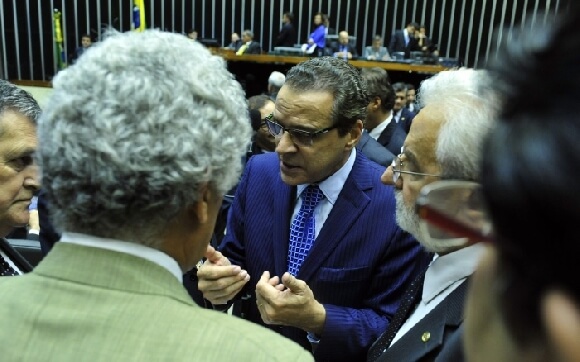 PEC 215: No vote by special commission of Brazilian House

Oswaldo Braga de Souza, ISA
The following is an unofficial translation of an article that first appeared in Portuguese at www.socioambiental.org. It has been edited for an English-speaking audience. You can find the original article here.

Brazil’s Congress concluded late Wednesday (17/12) night, without the Proposed Constitutional Amendment (PEC) 215 being voted on by the special commission that was to analyze it. With this, in accordance with the Rules of the House, the commission shall be disbanded and the proposal archived in an historic victory for defenders of the environment, Indigenous and traditional peoples.

With the support of the agribusiness bloc in the House, the PEC intended to transfer from the Executive to the Legislature the prerogative to formalize Indigenous Lands, Units of Conservation (UCs) and Quilombola Territories. If approved, it would mean, in practice, the definitive paralysis of the processes of making these protected areas official, among other retrogressions to socioenvironmental rights.

The last two weeks have been particularly tense for opponents of the proposal, when parliamentary supporters of agribusiness (ruralistas) and socioenvironmentalists engaged in a battle of regimental maneuvers over the legislative procedures applied to it. On Tuesday (16/12), access to the doors of Congress was restricted. A large police contingent was mobilized under the order of the president of the House, Henrique Eduardo Alves (PMDB / RN), to prevent the entry of protesters. Indigenous peoples protesting the PEC were repressed and six of them were arrested.

The vice president of the special commission, member of the ruralist caucus Nilson Leitão (PSDB-MT), conceded defeat on the floor of the House, despite the dominance of the agribusiness caucus. “We could not finish the year without minimally debating the PEC. We were defeated in a cowardly way. The chairman of the commission, Afonso Florence [PT-BA], held us up throughout the morning and came here surreptitiously and closed the meeting”, the representative said resignedly.

For most of the morning, conducting a contentious meeting of the commission, Florence patiently rejected, one by one, the various points of order submitted by the few representatives opposed to the PEC. The PT (Workers Party) representative, however, won time and angered the agribusiness bloc. Shortly before midday, when the lights went out in the Congress, he suspended the session. Members had to go to the House floor to monitor the voting on the day’s agenda.

The expectation of the ruralistas was to read and vote on the revised bill of Representative Osmar Serraglio (PMDB-PR) so that having completed the voting in the full House, the meeting could be resumed. With the prolonged voting on the complexities in the plenary session, Florence addressed the chair, was allowed to speak, and called for the closure of the meeting of the commission there from the floor, under protest from Nilson Leitão. In the corridors of the House, the expectation was that the agribusiness caucus would attempt a new maneuver to conduct a new meeting of the commission. They continued pressuring Alves and Florence to go back and try to vote on the PEC report until late into the night, but, with the Congress already substantially emptied, were not successful.

They need to address the revised bill from Serraglio no later than the following day. In general, parliamentarians leave Brasilia to return to their states at the latest by Thursday at lunchtime. The parliamentary recess is expected to begin this coming Monday, Dec 22, 2012.

Outside of the Congress, a group of more than 50 Indians spent the day in protest against the PEC, singing and dancing, prevented from entering the building by a large contingent of police. There were no incidents at any time.

“This was really the victory of 2014, at a time when we saw no possibility of winning, given the votes and maneuvers by the ruralistas”, this said in recognition of the outcome by Sonia Guajajara, executive coordinator of the Articulation of Indigenous Peoples of Brazil (APIB). She stressed the importance of unity of parliamentary allies, indigenous organizations, indigenous advocacy groups and environmentalists in the fight against the PEC.

Archiving of the PEC

“Article 105 of the House Rules of Procedure stipulates that bills must be archived at the end of the legislative term if not approved by all the committees through which they must be processed”, explains Maurice Guetta, lawyer for the ISA (Socioenvironmental Institute).

He points out, however, that the agribusiness bloc can still attempt a regulations maneuver ordering that the PEC not be archived this year, or that it be reopened, at the start of the next session of the legislature. Guetta predicts that they will continue to try to pass proposals that oppose legislation addressing the environment and indigenous and traditional peoples’ rights.