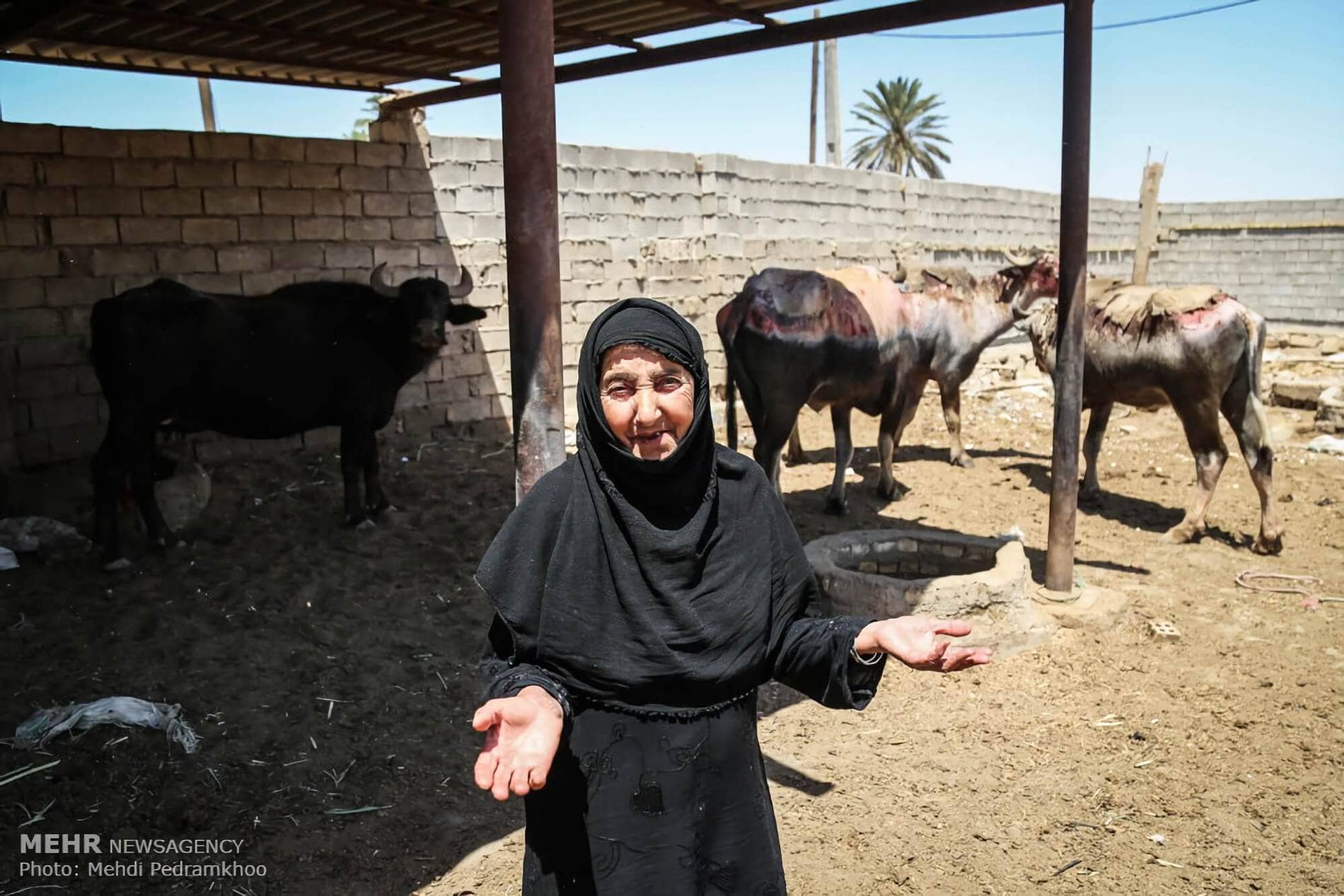 This image shows three water buffalos whose skin are melted down due to high temperatures, high salinity of water and water scarcity in the marshlands of Ahwaz region in the background. A female Ahwazi farmer puts her hands up in exasperation on a barren farm. Photo by Mehr News Agency, published with the intention to redistribute.
Support our journalism. Become a Patron!

Despite the Iranian establishment’s long-standing efforts to block media information, awareness is steadily increasing about the horrendous and rapidly intensifying water crisis in the traditionally Arab region of Ahwaz in the south and south-west of the country. To observers without knowledge of the situation, it may seem that this escalating catastrophe is a natural disaster resulting from climate change.

However, those familiar with these policies know that successive governments have instituted a massive program of dam-building and river diversion in the region to redirect the water from its once-bounteous rivers to other, non-Arab areas of Iran. These policies have had inevitable results – desertification and mass migration of the Ahwazis to other areas of Iran or to other nations simply to survive.

The Ahwazi people see this dam and river program, not as the result of incompetence but as part of a deliberate, long-term calculated policy of ethnic cleansing intended to change the demographic balance in the region, which is home to over 95 percent of the oil and gas resources claimed by Iran. The aim, in this view, is to force out most of the Arabs and end their claim to sovereignty or ownership of their resources. In the process, natural habitats, wildlife, crops, and farm animals are suffering horrendously, with environmentalists warning of ecological catastrophe if these problems are not addressed.

The devastation of the Karoon River is typical of the massive damage caused by this program; once a major waterway feeding into the renowned marshlands and estuary on the Gulf, which was busy with oceangoing vessels and fishing boats and supplied water for agriculture and farming, it’s now reduced to a trickle in some parts, with the once-bounteous marine life almost completely extinguished.  The regime’s construction of the Gotvand Dam whose bed is built on a salt flat is widely viewed as the principal factor in this devastation.  The dam, widely and variously condemned as a “salinity factory”, an “exhibition of environmental lessons”, an “environmental disaster”, and “the great national mistake”, has increased the river’s salinity level by 25 percent, making the water toxic to marine life and undrinkable for other species, as well as being useless for irrigating crops.

“The regime massacred and buried all of us, human and animals alike. Where are those humanitarians and environmental activists who fight for the environment to help stop our slow death?”

Hamza Kaabi, an Arab farmer from the rural area of Howeyzeh told Global Voices despairingly through a WhatsApp conversation:

“We’ve been abandoned here. We had six million palm trees in this region – now five million have died due to the high salinity levels of the water. Our environment’s polluted, our animals such as water buffalos are dying. Is this the justice that the Islamic Republic promised for us? So many locals here have been poisoned by drinking the contaminated water, with many, including children and elderly people, having severe dysentery. We don’t even have an emergency health clinic to go to for treatment – we have to travel hundreds of kilometers to get to the hospitals in Ahwaz.”

“Our ‘unforgivable sin’ is that we were born Arab, which is why we’re subjected to all this misery and suffering. When we look around at our conditions, our burnt lands and our devastated environment we can imagine Hell. We see and breathe only dust here. The regime massacred and buried all of us, human and animals alike. Where are those humanitarians and environmental activists who fight for the environment to help stop our slow death?”

According to Iranian news agencies, the deterioration of the quality of the brackish, foul-smelling drinking water provided to Ahwazis has resulted in poisoning dozens of Arab residents in the cities of Rofaye and Howeyzeh and Ramez.  Meanwhile, the shortage of water for agricultural use has resulted in farmers being driven to the brink of destitution, with crops withering due to the salinity and toxicity of the remaining polluted water supply, which is heavily polluted not only by the dumping of untreated sewage directly into the waterways but by the oil and gas refineries releasing toxic chemicals into them. This is further magnified by the government turning much of the region over to a ruinously expensive sugarcane growing program, which costs far more money than it makes, with refineries built on the riverbanks using the rivers’ remaining waters in the water-intensive refining process before dumping the residue polluted with chemicals used in the refinery process back into the water. The region’s once-renowned marine life is largely wiped out, with the fish and birds that thronged the rivers and wetlands at the Gulf estuary either wholly disappeared or rapidly vanishing.

Farmers in Ahwaz fear that the date-palm plantations whose sweet produce was famed across the region are facing extinction after the government dammed and diverted the once-bounteous rivers used for generations to irrigate their lands, with the waters that sustained the trees now sent to other, ethnically Persian areas of Iran —  the palm trees wilt and die.

The farmers’ pleas to provide alternative water sources have fallen on deaf ears, with desertification accelerating as the rivers are reduced to a salty trickle, leaving the farmers without water for their farmlands or even for their own survival and that of their livestock.

Although palm trees are capable of surviving in harsh desert heat, they need water and the lack of any fresh water and the salinity of the remaining water supply means those in Ahwaz are dying off. In a document about the current crisis, the Deputy Rural Cooperative Organization of Ahwaz explained that ‘the inflow volume of Karoon River water has been severely reduced. As a result of the low water level in the river, we’ve witnessed a surge of salty water from the Gulf into the Karoon River, which increased the salinity level of the water in this river.’

Farmer Khalaf Ghezi, from Ahwazi rural areas, veered between despair and anger at the bleak situation and the regime’s refusal to intervene or help the people:”Why don’t the authorities listen to our voices? Our Buffaloes are dying because of the river drying up. We don’t have jobs. Our only source of income is our livestock. If these animals are starved, we will starve too. While the massive profits from the oil and gas resources from the Ahwaz region goes straight to the Iranian regime’s coffers, with the Ahwazi people attaining no benefit from their natural resources; it’s common to hear Ahwazis lament the discovery of oil and gas since both are widely seen as having brought nothing but oppression, poverty and suffering, along with the pollution from their extraction.”