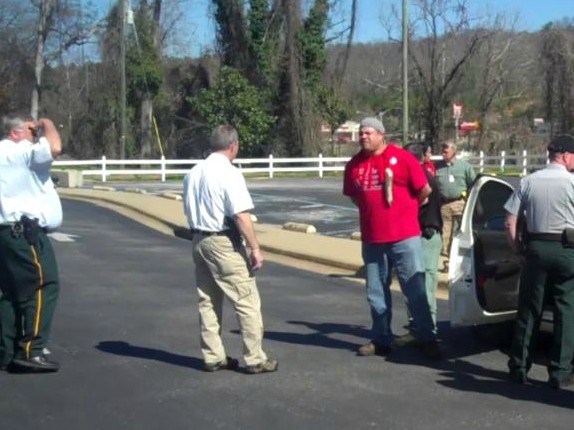 This video shows the arrests of four Native American demonstrators who sought to pray at the ceremonial ground where the human remains of approximately 57 Muscogee ancestors were excavated in Wetumpka, Alabama. This video exonerates Hickory Ground Tribal Town member Wayland Gray of charges that he made a “terroristic threat” to “burn down” the Poarch Band of Creek Indians’ casino that is currently being constructed at the ceremonial ground.

On February 15, 2013, the Poarch Band of Creek Indians tribal police arrested four men for trespassing after denying them access to pray at the ceremonial ground known as Hickory Ground to honor their ancestors. Poarch Band tribal police accused Wayland Gray of making a “terroristic threat,” which caused him to be held for 5 days on a $30,000 cash-only bond at the Elmore County jail. The criminal charge is a felony under Alabama law and carries a sentence up to 10 years in prison.

On February 17, 2013, Poarch Band of Creek Indians Spokesperson Sharon Delmar stated in an email to Indian Country Today Media Network that, “Mr. Gray threatened to burn down the casino.” Delmar stated, “the video that we have [of Gray’s arrest] is not being released as it is evidence in an ongoing investigation,” according to ICTMN.

In a telephone interview from Elmore County jail that same day, Gray challenged the Poarch Band to release the video of his arrest, which he said would exonerate him of the “terroristic threat” charge, according to ICTMN.

At the end of the video, Gray states to the Poarch Band tribal police, “We will be back. Whenever this casino’s down, we will be back.”

Importantly, Gray never says the word “burn,” nor does he threaten to take any action other than to return to Hickory Ground. Gray’s statements were consistent with his expectation that Hickory Ground Tribal Town and the Muscogee (Creek) Nation will prevail in their pending lawsuit to enjoin the Poarch Band of Creek Indian’s casino development at Hickory Ground, and restore the ceremonial ground where the Muscogee ancestors were excavated to nature.

Join us to protect Native American sacred lands and burials and help us save Hickory Ground for the Mvskoke ancestors: