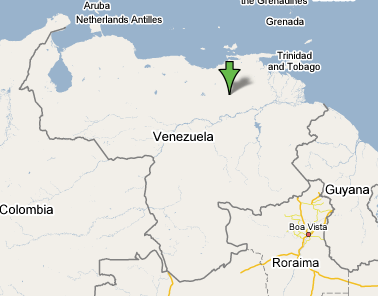 Coinciding with the launch of the First International Congress of the Anti-imperialist Indigenous Peoples of Latin America (Abya Yala), yesterday, Venezuelan vice-president Jorge Rodriguez handed over eleven communal titles to the lands belonging to the Pume, Yaruro, Karina and Warao peoples of Apure, Anzoategui and Bolivar States. The Vice President also handed over credits to indigenous communities for a series of projects to improve community standard of living.

The congress itself, which took place from August 7 to 9 in San Tome (see image) brought together more than a thousand delegates from 22 different countries…

From Venezuelan Analysis – The first day of the congress covered issues of empowerment of indigenous people, through the articulation of their demands at a national level and expressions of communal power such as the Communal Councils in Venezuela, as well as the importance of promoting and strengthening cultural diversity and preserving indigenous languages, and the Bolivarian Alternative for the peoples of the Americas (ALBA).

The indigenous peoples of the Americas will also share their experiences of US imperialism, privatization of land and resources and struggles against privatization and for the recognition of land rights. Also to be discussed at the conference is the concept of ‘Indo-American socialism’, the discourse of Socialism of the 21st Century, and more specifically the Bolivarian Revolution in Venezuela, including the “five constituent motors” for pushing the revolution forward, and the role of indigenous peoples within the revolution.

“We are going to celebrate this congress with the aim of going towards the formation of a Continental Anti-imperialist Indigenous Council, constructing ‘Indo-American’ socialism and the Bolivarian Alternative of the peoples of the Americas,” declared Maria Caicuto, the vice-minister for the communal indigenous territory of the Deltas, Mountains, Coasts and Mangroves. (source)

More information about the Congress will soon follow at http://liberatedyet.blogspot.com/