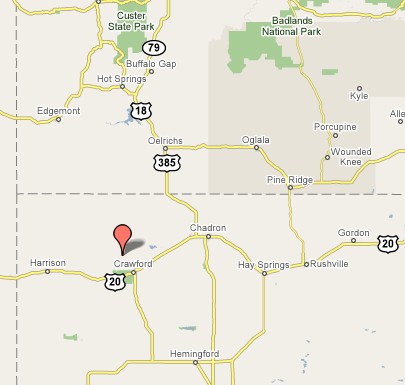 Uranium mine expansion threatens the Lakota

The Canadian-based uranium giant Cameco Resources is attempting to expand their mining operation near Crawford, Nebraska. Last year they submitted a proposal to the Nuclear Regulatory Commission (NRC), asking permission to use another 2.4 billion gallons of water over the 4.7 billion they currently exploit (per year) from the High Plains aquifer, the largest aquifer in America.

If the expansion is approved as Cameco hopes it could seriously infringe on those who depend on water from the High Plains – and several interconnected aquifers; among them, the People of Pine Ridge Indian Reservation and others in eight states from Nebraska to Texas. At the moment, the aquifer is being depleted at a rate of 160 percent above its ability to replenish.

A group of indigenous stakeholders and environmental organizations say this expansion must not happen. Led by Debra White Plume and Owe Aku (www.bringbacktheway.com), Tom Cook of Chadron NE, Slim Buttes Agricultural Development of Pine Ridge Indian Reservation, and the Western Nebraska Resources Council – the groups say the mining operation is already having a serious impact on Pine Ridge and other communities. In November, they filed a petition with a panel of judges with the NRC, seeking the right to participate in the decision regarding the expansion.

Among several concerns they’ve raised, the groups point to the massive spill in 1996 that brought nearly 300,000 gallons of radioactive waste to the aquifers. The company says they’ve cleaned it all, but the groups say Cameco left behind 100,000 gallons which they believe is slowly moving as a radioactive plume through the aquifers—one of which lies directly beneath Pine Ridge.

They also say there’s a link between the 98 wells that have been closed because of radioactive contamination and an emerging health crisis at Pine Ridge. An unusually high number of cases are being reported of mothers having miscarriages; of children having brain seizures; of birth defects appearing in newborns; and in adults getting cancer and kidney disease. (Never mind the expansion, this should be more than enough to bring Cameco’s operation to a grinding halt.)

Another concern raised by the group is directed at Cameco’s water use. As discussed in one of three Press Releases (pdf) sent out by Save Crow Butte (www.savecrowbutte.org), the ongoing (and possibly increased) depletion of water not only threatens Pine Ridge’s ability to sustain life, but it also infringes on “the trust responsibility, hunting and fishing rights, as well as rights to meaningful and effective consultation concerning activities that may threaten the Tribe’s water resources or the ability of the Lakota people to practice sacred ceremonies such as the “sweat lodge” using local, pristine water unadulterated by the ISL mining process.”

Trees of Hope in a Forest of Death

The NRC Panel is still in the process of deciding whether or not to allow the groups’ involvement as stakeholders. There has been at least one hearing to speak of, which was followed by the Panel asking the petitioners to submit “a briefing on the indigenous and water issues which are germane to the case because of proximity of the ISL mine to Pine Ridge Indian Reservation.” The groups did that just over a week ago.

Accompanying the brief, the Oglala Sioux Tribe along with the Center for Water Advocacy (www.wateradvocacy.org) and Rock the Earth (www.rocktheearth.org), filed amicus curaie briefs explaining the primary water rights of the Oglala Sioux.

Stated in a second Press Release (pdf) by Save Crow Butte,

[…] “the briefs also explain the Petitioners’ and the Tribe’s rights under the Ft. Laramie Treaties of 1851 and 1868, Federal Indian law and environmental justice policies, the UN Declaration of the Rights of Indigenous People, and the International Covenant on Civil and Political Rights. During a January 16, 2008 hearing in Chadron, Nebraska, Chief Administrative Judge Ann M. Young requested briefing on the indigenous and water issues which are germane to the case because of proximity of the ISL mine to Pine Ridge Indian Reservation.”

[…] “The Tribe is greatly concerned by the expansion of the mine because of the health hazards and environmental degradation that will result to the residents of the nearby Pine Ride Indian Reservation. Of equal concern is the destruction of tribal cultural resources and historic properties in the Crow Butte area.” the Oglala Sioux Tribe stated in its brief.

Additional, supporting affidavits were also filed by several members of the International Council of Thirteen
Indigenous Grandmothers (www.GrandmothersCouncil.org) and from Winona LaDuke of Honor the Earth (www.HonorEarth.org).

According to the third Press Release (pdf) dedicated to the Women,

The Indigenous Grandmothers pointed out sacredness of water and the use of water to make medicines and conduct sacred ceremonies in addition to being used as a vital natural resource. “When we come into this life, our mothers carry us in their bodies, and we are in the water. That is our first experience in this life, being in the water, and so it is holy for us. We carry that relationship with water through our lives…Lakota people need to have good water nearby for use for our ceremonies….the water purifies us,” explains Beatrice Long Visitor Holy Dance.

Indigenous Grandmother Flordemayo explains, “I work with healing sicknesses, and I use water often. To be useful, in a healing, the water must be intact….the water is vital to [the sweat lodge ceremony], and it must be pure, uncontaminated water for the ceremony to be effective.”

Indigenous Grandmother Polacca adds, “[w]e must not allow these teachings about water to be forgotten. The water must be kept pure for the people. The water is what we come from, and it is through the water that we are all related with peoples all over the World. The family of human beings is the family of water, and water is the basis of life around us.” Winona LaDuke states, “[i]t is time for a new energy policy that is not built on the continued suffering of Native peoples and their communities who can rarely wield sufficient political power to successfully protect their interests.”

It’s not clear what’s going to happen from this point, but like trees of hope in a burning forest of death we all need to help protect what is important or it will become lost in the flames. To that end I encourage you to speak up and help spread the word about this issue.

I’m not entirely sure who you can contact at this point, but I did manage to find the email address for Jerry Grandey, Cameco’s president and CEO. You can contact him at Grandey@cameco.com

If you would like more information, that is beyond what’s available at www.savecrowbutte.org you can also contact David C. Frankel, Legal Director – 415-707-2109, info@uraniumisnotmyfriend.com and Bruce Ellison, Attorney for Petitioners – 605-348-9458, belli4law@aol.com

Finally, you can also send donations to Plenty International, fiscal sponsor of the project (www.thefarm.org), and earmarked for “Save Crow Butte”: POB 394, Summertown, TN 38483; www.savecrowbutte.org.