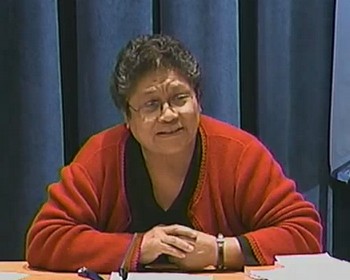 Myrna Cunningham, chair of the Center for Indigenous People’s Autonomy and Development in Nicaragua, briefly introduces “the State of the World’s Indigenous Peoples”, the first UN publication on the issue. The report was authored by seven independent experts, including Ms. Cunningham, and produced by the Secretariat of the United Nations Permanent Forum on Indigenous Issues.

For instance, the report identifies that:

1) “Up to 90 per cent of the world’s languages are likely to become extinct or threatened with extinction by the end of the century”;

2) Suicide rates of indigenous peoples, particularly among youth, are considerably higher in many countries, for example, up to 11 times the national average for the Inuit in Canada;

4) Worldwide, more than 50 per cent of indigenous adults suffer from Type 2 diabetes – a number predicted to rise.

5) Indigenous peoples’ life expectancy is up to 20 years lower than their non-indigenous counterparts.

One of the most significant and immediate threats facing indigenous peoples identified in the report, however, is displacement and the dispossession of their lands, territories and resources. The report lists many examples of this happening in Malaysia, Indonesia, Thailand, Hawaii, Rwanda, Burundi, Uganda, Democratic Republic of the Congo (DRC) and Colombia. There are many, many other cases around the world.

And “when indigenous peoples have reacted and tried to assert their rights,” the report notes, “they have suffered physical abuse, imprisonment, torture and even death.” There are many, many examples of this as well. 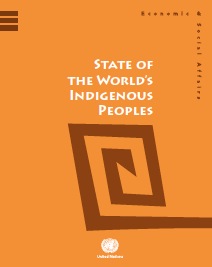 The United Nations today launched its first report on the state of the world’s indigenous people, with the Chair of the United Nations Permanent Forum on Indigenous Issues, Victoria Tauli-Corpuz, saying it offered a “daring and bold” description of the situation of indigenous persons in health, poverty, education and human rights, and should be fed into the upcoming review of the Millennium Development Goals.

Addressing journalists at a Headquarters press conference this afternoon, Ms. Tauli-Corpuz said the lack of disaggregated data on indigenous people often meant that goals set by Governments to tackle poverty and other social ills did not address the particular situation of indigenous persons.

“The value of this report is really going to be far-reaching, because now we have really very clear information, data and statistics that are also coming from United Nations publications,” she said, explaining that the data in the report ?? which was also being launched today in Mexico, Colombia, Brazil, Russian Federation and Belgium, and in the Philippines in February ?? was not the sort Governments could deny, since it was collected by the United Nations through a rigorous process.

She said the report contained “damning statistics” on poverty among indigenous people, who made up one third of the world’s 900 million rural poor even when living on lands that were resource-rich. It also described how States indulged in over-exploitation of resources without indigenous peoples’ consent.

“We live in territories which have the richest resources, whether this is oil, gold, forests, water,” said Ms. Tauli-Corpuz. “And yet you find this kind of poverty.”

She said pockets of poverty in the world’s developed countries were commonly made up of the indigenous population. Canada, for example, was perched high on the human development index, but its position would drop considerably if the situation of indigenous people were factored into the index, she said.

Speaking alongside Ms. Tauli-Corpuz, Myrna Cunningham, Director of the Centre for Indigenous Peoples’ Autonomy and Development in Nicaragua, said land-rights issues figured prominently in the report, which had repercussions even on health. One of the report’s co-authors and a trained surgeon, she said indigenous peoples’ loss of land had led to changes in diet and a disproportionate rise of diseases like diabetes in their community. The indigenous population also suffered higher rates of cardio-vascular illnesses and, in some countries, had an average life expectancy that was shorter by 20 years, compared to the wider population.

Ms. Tauli-Corpuz said the next step was to publicize the report widely among Governments, stressing also the benefits of including indigenous peoples in the State’s search for solutions to global problems, like the economic crisis and climate change.

Asked to specifically comment on the role of indigenous people in tackling climate change, she said the indigenous community who were present at the recent Copenhagen Summit had managed to insert a reference to the Declaration on the Rights of Indigenous Peoples in the draft outcome document. Although the draft was not adopted at that meeting, she said the insertion of such language into the draft offered hope that an eventual international agreement would include indigenous people in the global process for dealing with climate change.

Aside from climate change, among the emerging issues highlighted in the report was the increased militarization of indigenous territories, which Ms. Tauli-Corpuz said was at risk of becoming worse because of the war on terrorism. A national security report published by the United States, for instance, had identified indigenous peoples as potential terrorists, which she said had come about because of their strong resistance against the exploitation of their territories.

Addressing the issue of United States army bases in Colombia, Ms. Cunningham said that indigenous communities in that country had been concerned by the placement of such bases on their land, and were now engaged in a dialogue with the Government. There was no outcome, yet, on those talks.

Encroachment on indigenous territories was not only at the hands of the military, but also corporations, she said, explaining that, in Guatemala, indigenous peoples had consulted mining companies numerous times to try to become active parties to decisions to mine their lands. The indigenous community there was now fighting to turn the results of those talks into binding agreements.

In Peru, however, arguments over mining on indigenous territory had turned violent, she said, causing 30 people to lose their lives in June 2009. The United Nations Special Rapporteur on the rights of indigenous persons had recommended that dialogue take place, but so far none had been held.

Ms. Tauli-Corpuz said the Permanent Forum on Indigenous Issues was currently exploring ways to work with the Special Representative on business and human rights to push Governments to adhere to the State duty to protect against human rights violations by third parties, including multinational corporations. It would also advocate for more corporate responsibility to protect rights, and for greater access to both judicial and non-judicial processes for indigenous peoples.