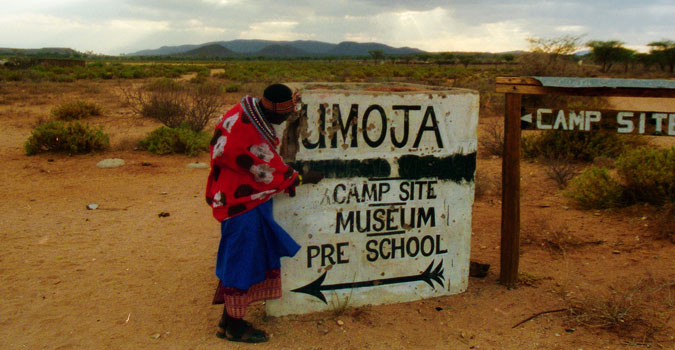 ‘Umoja: No Men Allowed’ tells the life-changing story of a group of Indigenous Samburu women in Northern Kenya who reclaimed their lives after speaking out against an epidemic of rape at the hands of British soldiers.

Their story began in the 1990s, when 600 women from the Samburu, Massai, Rendile and Turkana indigenous Peoples first spoke out. To the international community’s shock and dismay, the women said they had been raped by British soldiers for more than twenty years.

A three-year internal investigation by the Royal Military Police–an investigation that the women protested against–ultimately cleared all soldiers of wrongdoing. In turn, the press labelled the women’s alegations a massive “fraud”, as if the women just wanted to get some free cash.

The women payed dearly for raising their voices. When they returned home, their husbands beat them and cast them out, declaring that they had brought shame to their families. The women say they were forced to live on the fringes of society like animals. Children, born of mixed-race, suffered just as heavily as their mothers.

When Rebecca Lolosoli, a charismatic crusader for women’s rights, heard about the women’s plight, she decided to do something about it. Rebecca brought the women together to establish the village of Umoja (a Swahili term that means “unity”), on an unoccupied field in the dry grasslands.

Once Umoja was established, the women began to make handicrafts and jewelry, gather and grow food and raise their children.

The women’s success and prosperity incurred the wrath of the men. After building a new village 1km downstream to keep a close eye on the rebellious women, then men tried to follow the women’s lead by setting up their own tourism enterprise; but it ultimately failed.

Over the years, the men have also tried stopping tourist buses from reaching Umoja, and launched daytime raids on the village, because, the men say, the women are getting fat.

But the proud women work day and night to keep the village going.

The women of Umoja have rewritten traditional Samburu laws and they are determined to hold on to this new found sense of freedom and independence, even if they never get the justice they stood up for so many years ago.

To learn more about the film, please visit www.umojafilm.com

To donate and learn more about the women of Umoja, visit their website: www.umojawomen.org