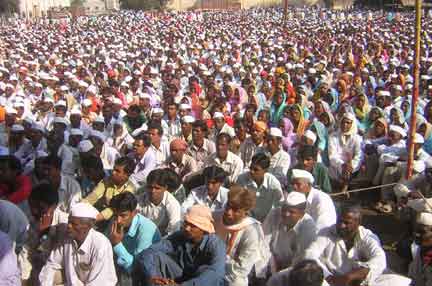 On January 1st of this year, the government of India took a major step toward respecting Indigenous Rights. They enacted the Tribal Forest Rights Act, a law which has been often said to correct the “historical injustice” where India’s forest dwelling indigenous population has been systematically excluded from having rights, and forced to abandon their lands, cultures, and livelihoods under the guise of forest preservation and the protection of wildlife.

The Forest Rights Act brings an end to this, it is said, through giving India’s forest-dwelling Peoples authority to forbid non-sustainable use or the exploitation of their lands, as well as primacy when land claims are disputed, and the right to rehabilitation for those who have been illegally evicted or displaced from their lands (prior to December 13, 2005). The law also forbids the sale of lands and gives people forest management rights.

This is certainly an important move by the government—even if there are some problems attached to the Act.
But there is one glaring issue that seems to be lost by the rhetoric of what this law can accomplish. The simple act is there can be no ‘correction’ until India’s forest dwelling population is free from being arrested, evicted, murdered, and impoverished. In and of itself, the Tribal Forest Rights Act cannot accomplish this… especially if the government refuses to implement the act.

In that we find a root of the injustice. Human Rights Activist Gladson Dungdung explains that there have been numerous laws in the past just like Tribal Forest Rights Act—but the government always refused to implement them. Instead, they continued to snatch “away the mainstay of the tribal’s resources i.e. land forest and water;” while treating the people as illegal encroachers (which happens to be the belief of those opposing the Act: namely wildlife conservation lobbyists and the Ministry of Environment and Forests.)

According to a news alert by The Campaign for Survival and Dignity, so far history is repeating itself.

On the very day that the PM wrote to State Chief Ministers in the name of implementing the new law, 125 houses were burned in the villages of Peepal Khotha and Juniwadi in Nepanagar Tehsil, Burhanpur District, Madhya Pradesh (the site of evictions in a further six villages in December 2007). Forest officers, along with more than one hundred hired labourers, attacked the villages after noon. More than 25 100 kilo sacks of grain were looted by the Department, along with more than 150 chickens, 60-70 goats, money, silver, utensils and clothing. All those attacked had been cultivating their lands since 1979.

[…] This behaviour by the State of Madhya Pradesh only confirms what the forest rights movements have always said – the mere notification of a law is but a step forward. For the government and the corporates driven by an agenda of expropriating resources, neither law nor policy nor rights have ever been of importance. The law is but a tool in our hands to fight for our homelands. Whereas before the exercise of force by the state was clothed in rhetoric about forest protection and wildlife conservation, now its illegality and brutality stands exposed. The emperor truly has no clothes.

It remains to be seen whether or not the government will shift beyond history and implement the Tribal Forest Rights Act. There’s really only one certainty in all of this… It is that India’s entire indigenous population will continue working to maintain their culture, tradition, land, and life.