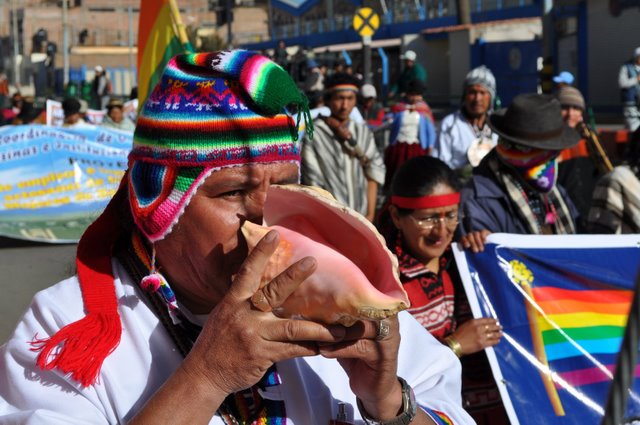 Today We Separate from Cruelty

To Learn more about the Global Minga, visit: https://intercontinentalcry.org/global-minga-in-defence-of-mother-earth-and-her-peoples/

The Mama Quta Titikaka Declaration comes to us on this day as a glimpse of what we shall now become, together, as one People.

Fear, doubt, guilt, blame, shame, denial: these pass through us like a fading glimpse of what never should have been—what shall never become again.

Because it is on this day that We Separate from Cruelty. That we remember our place on this land and know that we will be here long after the cities become dust—-and the youngest brother has learned his role on this land for the first time again.

Let us now become our words, so that we may rise up like a Mountain to ensure the future is one of peace.

Gathered at the Main Paqarina of the Mama Qota Titicaca Lake, 6500 delegates from organizations representing the Indigenous peoples from the 22 countries of the Abya Yala and our brothers peoples of Africa, United States, Canada, the Polar Circle and other parts of the world, with the participation of 500 observers from various social movements, we resolve:

To proclaim that we are witnessing a deep crisis of the Western capitalist civilization overlapping the environmental, energy and cultural crisis, the social exclusion and famines, as an expression of the failure of Eurocentrism and the colonialist Modernity that was born from ethnocide, and which is now carrying the whole humanity to its own slaughter.

To offer an alternative lifestyle against the civilization of death, rescuing our roots in order to project ourselves to our future, with our principles and practices of balance between men, women, Mother Earth, spiritual beings, cultures and peoples, all of which we call Good Living / Living Well. We are a diversity of thousands of civilizations with over 40 thousand years of history, which were invaded and colonized by those who, just five centuries later, are leading us to a planetary suicide. To defend our food sovereignty, giving priority to native crops, domestic consumption and communitarian economies. To provide power to our organizations so that they can improve our Living Well strategies, and to exercise them within our community governments.

To build Communitarian and Nationality Plural States based on the self governance, the self-determination of peoples, the reconstitution of the original nations and territories. With legislative, judicial and electoral systems and public intercultural policies, political representation as people without intervention from political parties. To fight for new Constitutions in all those countries that still do not recognize the plural nationality. The Nationality Plural States are to be not only for Indigenous peoples but for all the excluded people. Everything is for Everyone, we make an open call to all social movements and social leaders for an intercultural dialogue, with respect and horizontally structured, that will overcome verticality and invisibility.

To reconstitute our ancestral territories, as a source of our identity, our spirituality, history and our future. We the peoples and our territories are one entity. To reject all forms of land division, privatization, concession, predation and pollution from extractive industries. To demand the consultation and a prior consent from free and informed public, in our own languages, in good faith, and through representative organizations of our peoples, not just about projects but any policy and development plans. To demand the decriminalization of the Coca leaf.

To confirm the organization of the Minga (collective communal organization) of the Global Mobilization in Defense of Mother Earth and the Peoples, against the commercialization of life (including land, forests, water, sea, agrofuels, external debt) and the pollution (extractive transnationals, international financial institutions, GMOs, pesticides, toxic consumption), and the criminalization of the Indigenous and social movements, to be held from October 12 to 16, 2009.

To build a Climate Justice Tribunal to trial the transnational corporations and the complicit governments that are predating the Mother Nature, plundering our natural resources and violating our rights, as the first step towards an International Court of Environmental Crimes.

To organize an Alternative Summit in defense of the Mother Earth during the Convention on Climate Change in Copenhagen of December 2009, in order to push for effective actions facing the climate disaster, such as the consolidation of Indigenous territories, the Good Living model and the prior consultation and consent, as strategies to save the planet.

To address the criminalization of the practice of our rights, militarization, foreign bases, forced displacement and genocide among our peoples, through alliances and a broad mobilization for the amnesty of all our leaders and authorities on trial and imprisoned, especially for the fighters for freedom and for life who are in prisons of the United States and around the world. To support and to expand the demands presented before the Inter-American Commission on Human Rights and the UN Committee on the Elimination of Racial Discrimination. To promote the international trial of the governments of Colombia, Peru and Chile.

The trial of the government of Alvaro Uribe Velez, for committing genocide against Colombian Indigenous peoples. The Chilean State for enforcing an antiterrorism law, for the persecution and prosecution of the Mapuche peoples demands, for crimes against Mapuche leaders and the militarization of the Wallmapu territory. Trial of Alan Garcia for the legislative self coup including 102 pro FTA legislative decrees, which privatize Indigenous territories, and prosecuting and persecuting over a thousand innocent community leaders.

To implement our rights, demanding to all countries to give the UN Declaration on the Rights of Indigenous Peoples the status of national law, following the leadership from Bolivia, Australia, Mexico, Venezuela, among other countries. And that includes the right of communication of the Indigenous peoples. If President Barack Obama wants to make changes within the imperial disaster, he should start at home, and pass into law the UN Declaration on Indigenous Peoples in the United States.

To mobilize our organizations in defense of the struggle of the Amazon Indigenous peoples in Peru against the rules of privatizing their territories and natural resources. Their struggle is ours. To organize strikes during the first week of June in front of every Embassy of Peru in each of our countries, demanding the solution and not repression for our brothers and sisters. In that regards the Indigenous and farmers organizations of Peru agreed to hold an immediate National Strike of the Peoples of Peru by June 2009 demanding the repeal of the anti Indigenous decrees resulted from the U.S.-Peru FTA.

To reject the Free Trade Agreements with United States, Europe, Canada, China and other countries, which destroy our economies, and are new ways of people’s subjugation and the plundering of Mother Earth. We reject the tactics of the European Union along with the dictators of Peru and Colombia in order to destroy the Andean Community and to impose their FTA.

To mobilize our organizations and social movements of our countries in defense of the liberation process initiated in Bolivia, to reject any coup, separatist, racist and assassination attempts from the local oligarchy and the U.S. empire. To reject the political asylum granted by the Peruvian government to Bolivians génocidaires. And in that regards we agree to hold the V Summit of Indigenous Peoples of the Abya Yala in 2011, in the Qollasuyu region of Bolivia.

To strengthen our own bilingual and intercultural education systems and Indigenous health care models, to move forward in the liberation of the knowledge, in particular, to stop the biopiracy, defending our special policy of intellectual heritage of the Indigenous peoples with a collective and transgenerational nature.

To support the struggle of the peoples of the world against imperial powers, including the end of the embargo against Cuba, the Israel desoccupation of Palestinian territories, and in behalf of the collective rights of the Masai, Mohawk, Shoshoni, Same, Kurdish, Catalan and Basque peoples among others.

To construct models of alternative models of living facing the crisis of Western civilization and its colonial Modernity, through a Forum on the Crisis of Western Civilization, Decolonization, Good Living among others topics, to be held in Cusco, on March 26 to 28, 2010.

To create the Indigenous Peoples and Nationalities of the Abya Yala Coordinator, in order to continue the process of organizing from bottom up, and creating committees of Indigenous women, adolescents, children, youth and communicators, and particularly the regional integration in North America. This Abya Yala Coordinator is to monitor the Organization of American States and the United Nations, to overcome their subordination to the imperial power, and otherwise the United Nations of the Abya Yala and the World should be created.

The land does not belong to us, we belong to it!
The condor and the eagle fly together again!

Thanks to Carlos A. Quiroz, http://peruanista.blogspot.com