APR 11 – Demonstrations were held in Jayapura on April 5 in support of a groundbreaking conference held in The Hague, The Netherlands, to examine  pathways to the reinstatement of the New Guinea Council or Nieuw-Guinea Raad, the original Parliament of West Papua from 1961 until Indonesia’s invasion.

Jayapura was again brought to a standstill by the demonstration organised by the West Papua National Committee (KNPB), where several thousand people gathered hear speeches and to voice their solidarity with the “Nieuw-Guinea Raad: the First Steps” Conference.

Indonesian security forces were in attendance in large numbers at the rally, but no act of violence or provocation were reported by rally organisers. 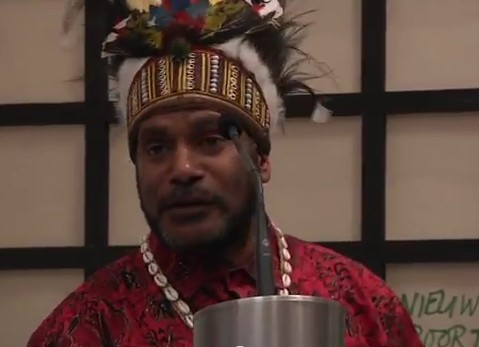 The New Guinea Council (Nieuw-Guinea Raad) was established on April 5 1961 whilst under Dutch administration as the concept of a more democratic mode of administration started to develop, as a body that was to be the basis for a independent West Papuan parliament.  According to the International Parliamentarians for West Papua, “The establishment of regional councils came from the requirement that the Charter of the United Nations imposed on the Netherlands: that the interests of the inhabitants of Dutch New Guinea had to be paramount.”

“The Netherlands was to respect the right to self-rule and had to take the political aspirations of the indigenous people into account. They were also meant to support the Papuan people with the gradual development of their own political institutions.  There are documents. We are not speaking of vague promises, but we are speaking of real firm commitments for the independence of the West Papuan people,” explained a spokesperson for IPWP.

Presentations at the conference in The Netherlands