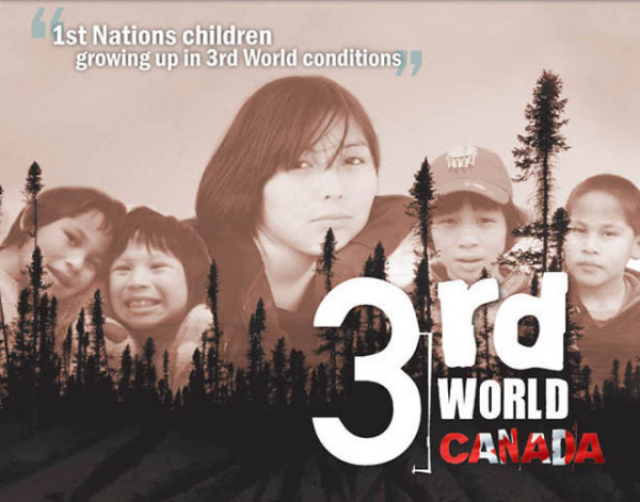 What do you know about the Third World in Canada? Set in the backdrop of the aftermath of the suicide of three parents, Third World Canada explores the impact of third world conditions on the children left behind and a community’s courage in looking after them.

Third World Canada, a new documentary film by Gemini-nominee Andrée Cazabon, puts a spotlight on Kitchenuhmaykoosib Inninuwug (K.I.) also known as Big Trout Lake, an isolated Indigenous Nation in Northern Ontario. The Nation dates back at least 7,000 years, where bones of their ancestors were discovered on the shores of Big Trout Lake. Today this proud Nation finds itself deeply impoverished and bound to a Treaty that restricted them to land unusable for agriculture and overall subsistence.

Activists in Canada know the name Big Trout Lake well. The remote Cree community was at the centre of a $10 billion lawsuit filed by the Toronto-based mining company Platinex in 2007. The lawsuit ultimately bankrupted Big Trout Lake. One year later, in 2008, K.I. Chief Donny Morris and 5 other members of the community were sentenced to six months in jail for saying “no” to Platinex, which claimed the right to develop a platinum mine on the reserve.

Big Trout Lake just made more headlines this month for standing up to De Beers, the world’s largest diamond company.

While all this has been making front page headlines, the Big Trout Lake has been struggling with the much-less publicized reality of life on reserve: a reality that includes mould-infested homes, unsafe drinking water, broken-down houses, makeshift schools, and, as NDP MP Niki Ashton recently pointed out, “store shelves holding healthy foods past their expiry dates because people can’t afford to buy them.”

Then of course, there’s the high rates of suicide and Infant mortality, physical and sexual abuse and chronic diseases among many other problems.

We can spend alot of time looking at all the numbers; but you really have to look at the people to know what’s going on. And you have take the time to understand why this “third world” exists in a country that constantly brags about it’s abundance: Why so many people are terrified to drink local water in a place with so many “clear lakes”; Why so many people eat junk food for dinner, because they can’t afford vegetables; Why fresh fish looks like it was grated on asphalt; And why successive governments have chosen to politically, culturally, and economically terrorize Indigenous communities as a matter of course.

“Third World Canada” may not have the answers to all these questions, but it speaks well to the consequences of Canada’s policies as well as the ongoing impact of residential schools and the government’s failure to respect indigenous rights. Thanks to Big Trout Lake, it also speaks directly to the way forward.

Filmed with the participation of Tikinagan Child & Family Services, the Nation of Kitchenuhmaykoosib Inninuwug and the Mamow-Sha-way-gi-kay-win: North South Partnership for Children.

To learn more about the film and to order a DVD, visit http://thirdworldcanada.ca/