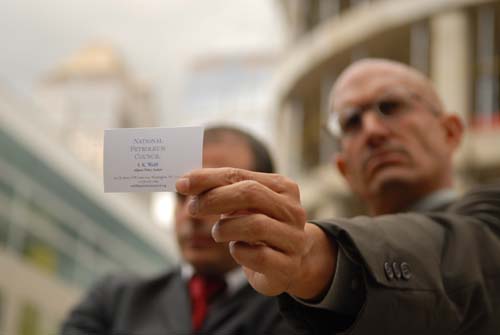 Yes, slavery is cost effective! Yes, that leisure suit would save time! Yes, I would love to light one of those candles!
Have you ever heard of the Yes Men Before? If not, they are a group of activists who practice what they call “identity correction.” Starting out by creating gwbush.com and gatt.org, the Yes Men have attended numerous conferences and even made onto the mainstream news a few times, posing as individuals from the WTO, McDonalds, Dow, and most recently ExxonMobil. The best part? They are treated as real people, and what they say is often accepted as reasonable and true…

The media portrays them as simple pranksters, but I think they’re much more than that—because— well a prank to me is slapping a pie in someone’s face, a good quick laugh :D but the Yes Men are accomplishing something more than this, because they are also giving us a direct glance at the underbelly of Civilization—showing all of us just how much ‘the business community’ may be willing to tolerate. But yes, of course some of what they do is also flippin hilarious, hehehehe…

I think the real Jokester in all this though is the business community. But I’m not sure we should be laughing at their goofy antics, should we?

The speech was billed beforehand by the GO-EXPO organizers as the major highlight of this year’s conference, which had 20,000 attendees. In it, the “NPC rep” was expected to deliver the long-awaited conclusions of a study commissioned by US Energy Secretary Samuel Bodman. The NPC is headed by former ExxonMobil CEO Lee Raymond, who is also the chair of the study. (See link at end.)

In the actual speech, the “NPC rep” announced that current U.S. and Canadian energy policies (notably the massive, carbon-intensive exploitation of Alberta’s oil sands, and the development of liquid coal) are increasing the chances of huge global calamities. But he reassured the audience that in the worst case scenario, the oil industry could “keep fuel flowing” by transforming the billions of people who die into oil.

“We need something like whales, but infinitely more abundant,” said “NPC rep” “Shepard Wolff” (actually Andy Bichlbaum of the Yes Men), before describing the technology used to render human flesh into a new Exxon oil product called Vivoleum. 3-D animations of the process brought it to life.

“Vivoleum works in perfect synergy with the continued expansion of fossil fuel production,” noted “Exxon rep” “Florian Osenberg” (Yes Man Mike Bonanno). “With more fossil fuels comes a greater chance of disaster, but that means more feedstock for Vivoleum. Fuel will continue to flow for those of us left.”

The oilmen listened to the lecture with attention, and then lit “commemorative candles” supposedly made of Vivoleum obtained from the flesh of an “Exxon janitor” who died as a result of cleaning up a toxic spill. The audience only reacted when the janitor, in a video tribute, announced that he wished to be transformed into candles after his death, and all became crystal-clear.

At that point, Simon Mellor, Commercial & Business Development Director for the company putting on the event, strode up and physically forced the Yes Men from the stage. As Mellor escorted Bonanno out the door, a dozen journalists surrounded Bichlbaum, who, still in character as “Shepard Wolff,” explained to them the rationale for Vivoleum.

“We’ve got to get ready. After all, fossil fuel development like that of my company is increasing the chances of catastrophic climate change, which could lead to massive calamities, causing migration and conflicts that would likely disable the pipelines and oil wells. Without oil we could no longer produce or transport food, and most of humanity would starve. That would be a tragedy, but at least all those bodies could be turned into fuel for the rest of us.”

“We’re not talking about killing anyone,” added the “NPC rep.” “We’re talking about using them after nature has done the hard work. After all, 150,000 people already die from climate-change related effects every year. That’s only going to go up – maybe way, way up. Will it all go to waste? That would be cruel.”

Security guards then dragged Bichlbaum away from the reporters, and he and Bonanno were detained until Calgary Police Service officers could arrive. The policemen, determining that no major infractions had been committed, permitted the Yes Men to leave.

Canada’s oil sands, along with “liquid coal,” are keystones of Bush’s Energy Security plan. Mining the oil sands is one of the dirtiest forms of oil production and has turned Canada into one of the world’s worst carbon emitters. The production of “liquid coal” has twice the carbon footprint as that of ordinary gasoline. Such technologies increase the likelihood of massive climate catastrophes that will condemn to death untold millions of people, mainly poor.

“If our idea of energy security is to increase the chances of climate calamity, we have a very funny sense of what security really is,” Bonanno said. “While ExxonMobil continues to post record profits, they use their money to persuade governments to do nothing about climate change. This is a crime against humanity.”

“Putting the former Exxon CEO in charge of the NPC, and soliciting his advice on our energy future, is like putting the wolf in charge of the flock,” said “Shepard Wolff” (Bichlbaum). “Exxon has done more damage to the environment and to our chances of survival than any other company on earth. Why should we let them determine our future?”