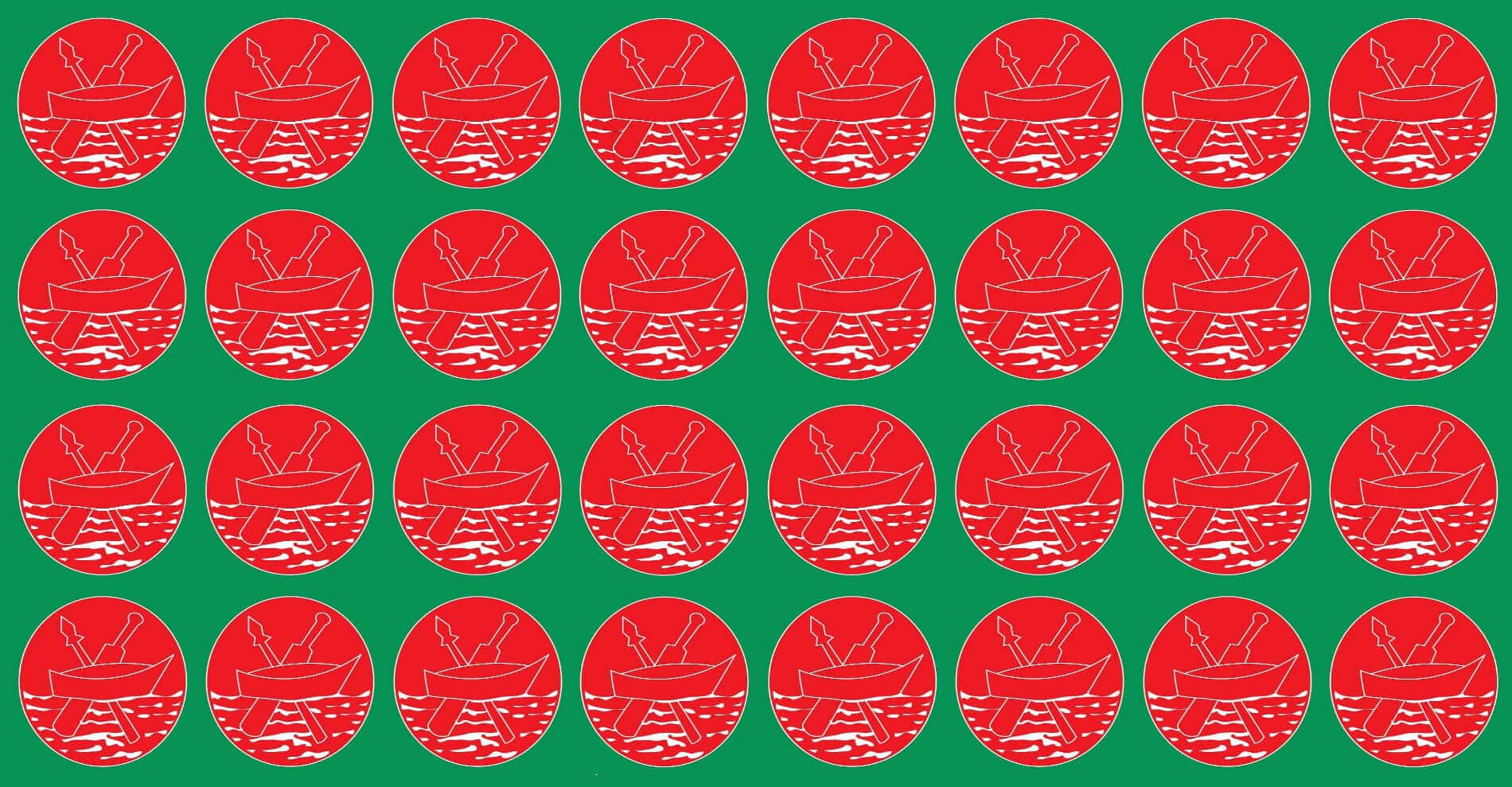 IC began reporting on the mounting chaos in Nicaragua 3 years before the student led civic uprising came to head in April of 2018. It was the first time that any news outlet was prepared to expose the state-sponsored, or state-tangential, violence that was spiraling on the Indigenous frontier of La Moskitia – the semi-autonomous, binational territory on the Caribbean coast.

It’s not that other groups weren’t mobilizing prior to that. The ‘Movimiento Campesino’ – notably led by Francisco Ramírez , who IC introduced unfamiliar readers to almost exactly 2 years ago, had been organizing intersectional resistance to Nicaragua’s environmentally catastrophic plans for a new transoceanic canal. The status of the canal is continuously in a state of infinite flux. It’s like Schrodinger’s cat – simultaneously alive and dead – at any given moment.

The anti-canal movement is still advancing to repeal Nicaraguan Law 840, passed in 2013, which grants the government power to appropriate Campesino and Indigenous land – for any reason they please – for the next some 100 years.

As tens of thousands of refugees now flow out of Nicaragua into neighboring Costa Rica, even as other Central Americans flee north to the U.S., an official dialogue has re-opened. The legitimacy of this dialogue has been hotly debated among Nicaraguan citizens, activists, and movement leaders.

President Daniel Ortega and Vice-President Rosario Murrillo (husband and wife) show no real signs of willingness to loosen the grip of their family dynasty, which they so meticulously concentrated power into since Ortega’s ‘triumphant’ return to the presidency in 2007.

12 years later, he is still in power; and by all appearances, it is his intent to stay that way at all costs…even when that ‘cost’ is human lives.

To date, due to state-sponsored violence under and directed by the Daniel Ortega administration, hundreds of lives have already been lost. Thousands of people have also been wounded – including many young students – and many more have been tortured and imprisoned on trumped up accusations, like the journalists who have been jailed on charges of ‘terrorism’. Especially heart-wrenching for many families, some Nicaraguans have been mysteriously disappeared.

Families and citizens who used to support the FSLN, and even many who fought with the Sandinistas during the infamous Contra wars, are turning their heads in shame, in disgust, in horror…And, great numbers of them are walking away from the country as a whole – if and as they are able – until things return to some sense of normalcy and / or their personal or familial safety is no longer under immediate deadly threat.

The mothers of at least 100 of the student protesters recently released by the government to meet conditions for continuing dialogue, after being imprisoned for months under questionable conditions, describe them as exhibiting symptoms of severe P.T.S.D. according to a report on March 4, 2019.

More and more evidence is piling up that weapons abused by paramilitaries terrorizing Nicaragua in recent months may be among the same rumored to have been government-issued to ‘Colonos’ who have long terrorized Indigenous communities in La Moskitia. The AK-47 rifles, reportedly associated with settler terrorism on the Indigenous frontier, are now listed as government issued “weapons of war” in an explosive new account originally published in Nicaraguan outlet, Confidencial, and, translated into English for Havana Times.

A verified source known as “Captain Leonardo” – who has to date served as a witness in at least 10 political trials and now admitted to being forced to testify lies on behalf of the government against dissenters – has recently provided this concrete information about weaponry distribution and acquisition.

On March 3, 2019, as the ostensible efforts at dialogue continued with the centralized government, regional autonomous elections carried on ‘not quite as usual’ in La Moskitia. (Later, on Sunday, March 10, the Civic Alliance, under pressure from other resistance movements, ended the dialogue until the government released more of the estimated 770 total political prisoners, after only a little over 100 had previously been released as a supposed concession).

Prior to the regional, autonomous elections held on March 3, a new law had opened up even greater potential for voter fraud. Independent news outlet in Nicaragua, Confidential, reported on this, and the disheartening levels of overall civic participation – also translated to English for the Havana Times – even as the final results were challenged due to widespread and calculated fraud facilitated by the FSLN dictatorship.

The polling places in La Moskitia, on election day, were also physically and visibly oppressed with a heightened military presence.

There has long existed a deadly military checkpoint (many have reported and disavowed attacks by FSLN soldiers there) between the poll locations and the Indigenous frontier communities, as well.

It is very likely that those who remain – and haven’t yet fled as refugees or IDPs (Internally Displaced Persons) to neighboring Honduras or the Indigenous city of Bilwi – in those more traditional Indigenous communities, were preemptively intimidated from even considering the already arduous and long journey to fulfill their right to participate in the civic process.

As for the Indigenous political party of YATAMA – once muddied by divide-and-conquer tactics vehemently promoted by the Sandinista to de-legitimize their power and regional Indigenous unity and autonomy – their popularity on the Caribbean coast seems to have skyrocketed as the FSLN showed their true colors of state terrorism to the world.

And yet, many even within the YATAMA party saw their highly organized participation in this recent election as a form of civic protest. A refusal to not be counted, but also a strategic participation with clear-headed, managed, expectations about their ability to win even in districts where they held majority support.

It is hard to say how historically accurate Motorcycle Diaries is, but if one were to take it as gospel, Che Guevera’s own original idea to solve the problems of poverty and marginalization throughout South and Central America was indeed…an Indigenous political party…

Well, here it is…And, here it has been…And, from the looks of things…So shall it be continued…

Reporting for the frontier communities, Cejudhcan Derechos Humanos, published this map and information on March 6, 2019: 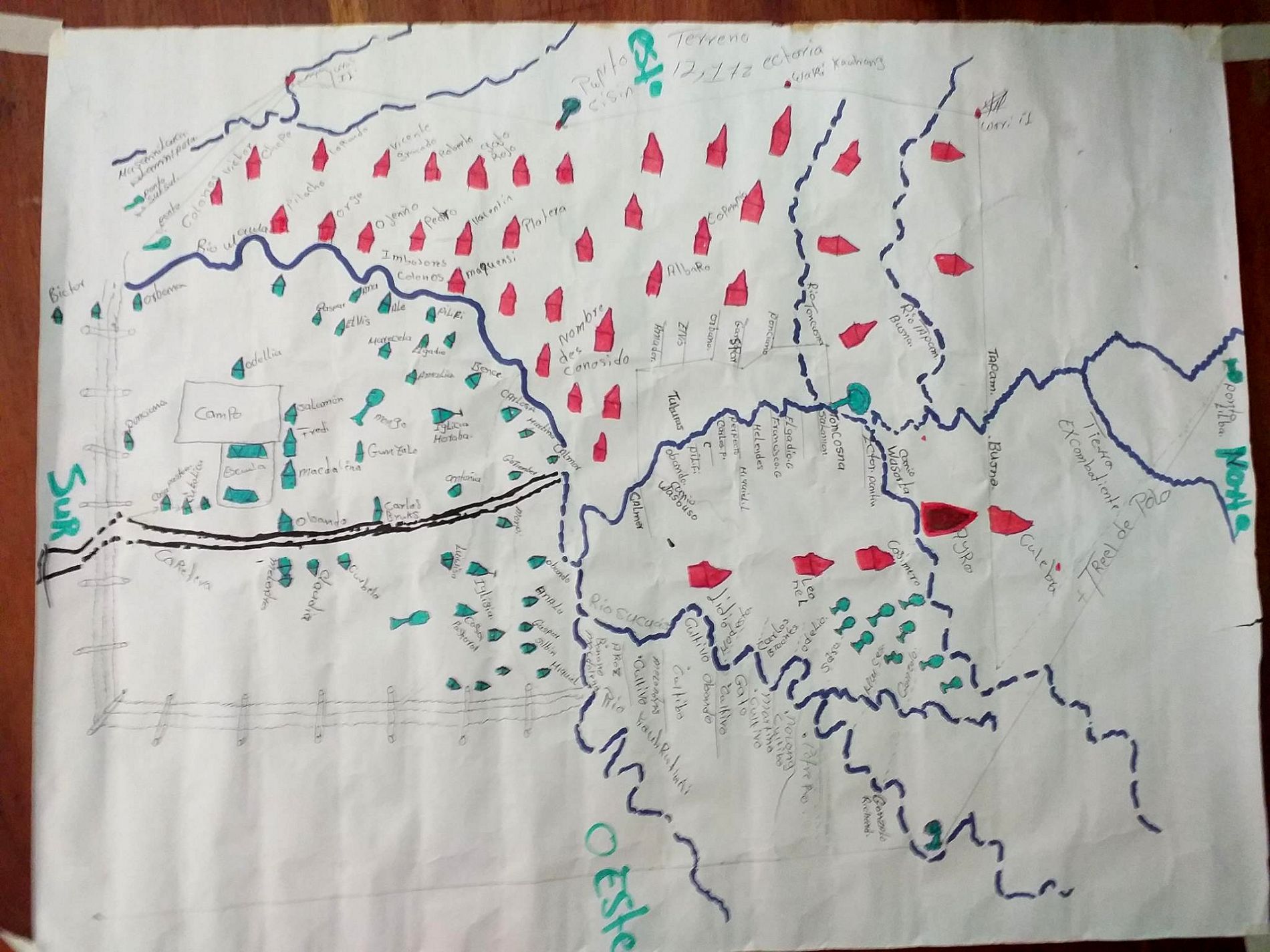 Source: Cejudhcan Derechos Humanos; A traditional Indigenous community in the frontier region of La Moskitia, Esperanza Rio Wawa, shared this map which highlights the usurpation of its communal property by invading ‘Colonos’ who have held their legal territories under a violent siege since around 2015 (according to the Moskito Council of Elders in a statement to ‘The Ecologist’).

“The Indigenous community of Esperanza Rio Wawa shares its map which reflects the usurpation of its communal property by settlers / third party illegal invaders of their legal communal property.

The red parts are the areas where, before the invasion, women performed traditional activities such as: the collection of Traditional medicines, sowing, hunting and fishing, which are currently being occupied by the [invading] ‘Colonos’ – who now outnumber the rightful inhabitants left in their traditional Indigenous communities [as so many have been forced to flee the deadly violence].

The situation is especially alarming because settlers do not allow communities to carry out these basic subsistence activities. These settlers / third parties are supported by the ‘Alcaldías Municipales y Gobierno Regional’ [municipal mayors and regional government] who have helped them build, in a short time: a school, road, church, and, antennas for Claro [the state telecommunications company] among other things.

Indigenous communities, instead, have routinely had to spend years requesting schools, roads, and other basic necessities for community development. The ongoing priority for the frontier Indigenous communities is the implementation of ‘Saneamiento Territorial’ [a movement to cleanse the territory of the illegal invaders, ‘Colonos’] in order to provide comprehensive security to Indigenous families.”