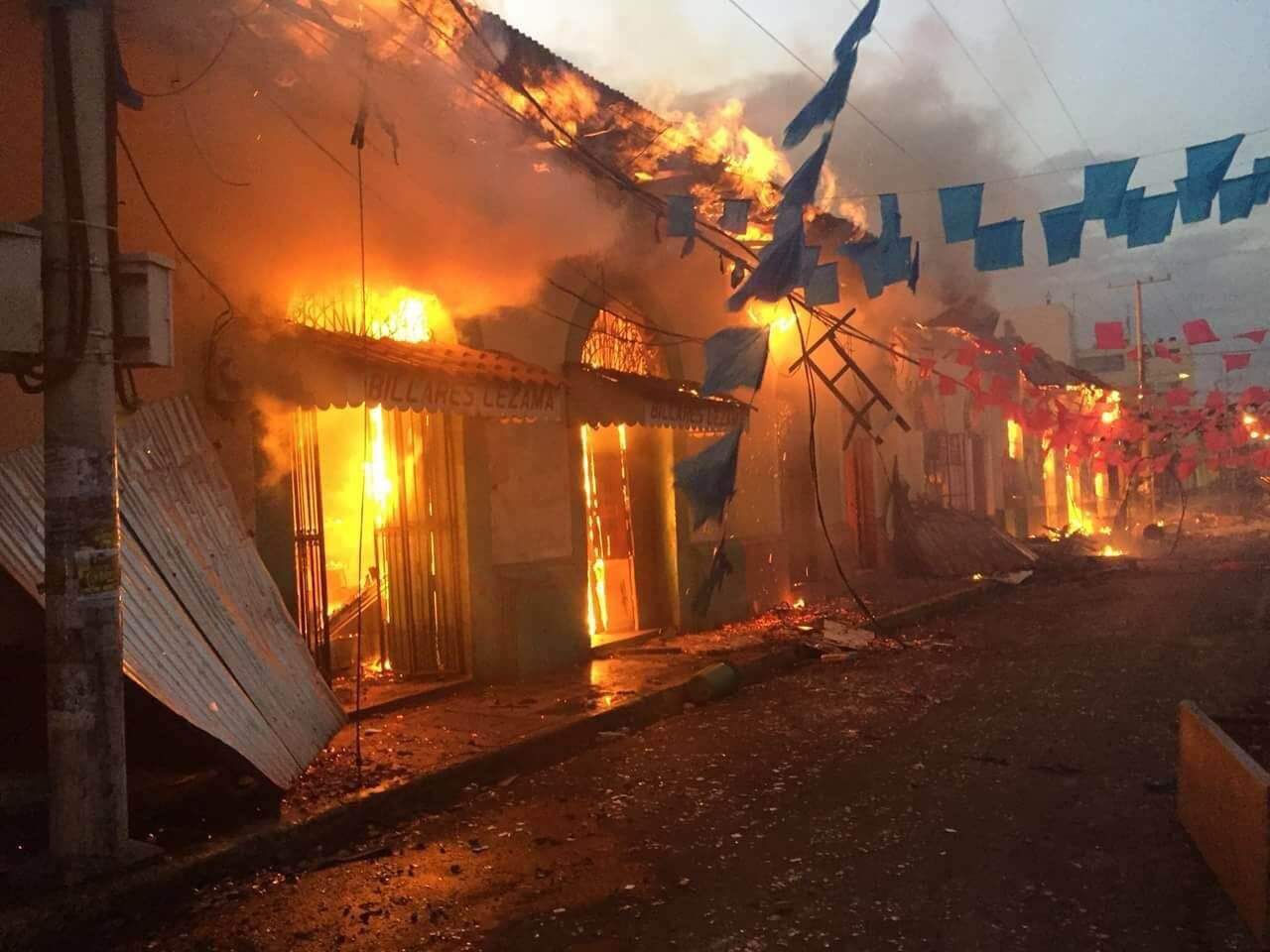 The Powder Keg of Nicaraguan Politics

Official Death Toll from Explosions of State Violence Rises to 63
Photo of destruction in León. Source anonymous.
Support our journalism. Become a Patron!

Over the past week, Nicaragua has erupted in protests. While this current crisis started over pension reform, its development has revealed far greater rifts. It appears Nicaraguans have finally had enough of the Ortega regime. They are demanding that the corruption and oppression end. For many, it may seem shocking that a country that re-elected President Daniel Ortega for his third consecutive term in November 2016, with a reported 72 percent of the national vote could now, less than two years later, have taken to the streets en masse demanding his immediate removal from office.

I first visited Nicaragua in 2012, and have spent extensive time in the country over the past two years undertaking ethnographic fieldwork as part of my PhD dissertation. Each time I arrived in Nicaragua, I heard more and more people express mounting levels of frustration with the political situation. Yet, it was a frustration that the majority internalized and kept mainly to themselves, mentioning it to me only in private spaces and usually when other Nicaraguans were not around. As someone explained to me on one of my first trips to the country, “On the street, we’re all Sandinistas. We have to be if we want to work and have our kids go to school. But in private… well, there you may hear another story.”

I began hearing people who had fought in the 1978-79 Sandinista Revolution and 1981-90 Contra War lament that the current government now resembled the Somoza dynasty they had fought so hard and sacrificed so much to overthrow. Many people told me they were still a Sandinista, just not a Danielista, highlighting their commitment to the ideals of the historic fight against dictatorship and the Sandinista Revolution, but fundamental disagreement with the current regime.

Hearing about corruption and repression is one thing, but witnessing it is another. In November 2017, in Bilwi, the capital city of the North Caribbean Coast Autonomous Region of Nicaragua, I watched the Ortega Administration steal a local election. As I felt the burn of tear gas deployed against peaceful protestors and watched National Police – trucked in from the capitol – fire live rounds at the crowds, perspective on Nicaraguan politics changed, permanently.

In the 2017 municipal elections in Bilwi, the primary match-up was between two parties: the FSLN (Frente Sandinista de Liberacion Nacional, Sandinista National Liberation Front) and the indigenous Miskitu party YATAMA (Yatama Aslatakanka Masrika Nani/Sons of the Mother Earth). I decided I would try and divide my time between the contacts I had from each party, hoping to remain impartial. On election day, I spent the morning with a contact who supported the FSLN. I accompanied them as they drove FSLN voters to the polls. At one point, they admitted to me that certain claims of the opposition were valid: Nicaragua was a dictatorship. But they countered that not all dictatorships were bad, exclaiming, “just look at all the progress in Cuba!”

Around 4 pm that afternoon, I arrived at a voting center with a YATAMA contact. Although the official closing time for the center was 6pm, elections officials were shutting its doors. People became angry that they were not being allowed to vote. The situation grew tense as a crowd formed. People reported facing harassment from authorities – including two women who told me about threats of sexual violence – when they tried to demand their right to vote. I remember thinking how my FSLN contacts had stressed to me that they would be voting early in the day, and making sure other FSLN supporters did the same. Did they know this would occur in the afternoon? Reports of similar problems soon emerged from other voting centers around Bilwi.

A few hours later, waiting outside the same voting center in a crowd of YATAMA supporters as they observed a contested re-count of votes, I noticed a new group of people arriving – all young and male. They began encircling the YATAMA supporters and jeering at them. One of the young men tossed a handful of dirt towards them, clearly trying to instigate a fight. Thankfully, the YATAMA supporters did not take the bait. But in that moment, I got a glimpse of the nature of the Sandinista turbas, the same groups of youths who are now terrorizing various parts of the Pacific coast and the capital city of Managua.

Once the FSLN victory was announced, YATAMA supporters took to the streets to protest what they perceived as a fraudulent outcome. While I had tried to remain politically neutral, I certainly empathized with their frustration. The irregularities at the voting centers seemed far too widespread to consider the FSLN win a fair one. Moreover, those who did vote for the FSLN often did so because they felt obliged to do so. As one young woman told me, she had wanted to support YATAMA, but voted for the FSLN since she was fearful of losing her university scholarship.

FSLN-controlled media outlets declared that the YATAMA supporters were causing mayhem in the city, but they were certainly not alone on the streets. Groups of the FSLN youth were out in force, fighting against the YATAMA supporters and vandalizing properties. The YATAMA house and radio station (which serves as one of the few Miskitu-language services in the region) and famous defiant Indian statue were all destroyed, which some audacious Sandinista sources blamed on YATAMA supporters. Through all of this, the protesters faced violent government suppression, including tear gas and even gunfire. Adding to the disarray, groups of criminals who claimed no political loyalties took advantage of the chaos to loot local businesses. One jokingly asked me if I wanted any new electro-domestic appliances from Gallo Más Gallo.

Injured protesters taking refuge in the YATAMA house, before it was burned to the ground. Photo by author.

After a day and a half of the protests, the local airport was shut down and rumors circulated that troops would soon blockade the road. I decided it was time for me to leave town.

Unbeknownst to me, a fight at the bus station broke out 15 minutes prior to my departure time. When I arrived, it was full of police and special forces from Managua, antimotines. As I approached the bus, eager to leave, an official stopped me. He claimed that he had seen me the day before at the protests and ordered that nearby police search my luggage as he closely examined my passport. He demanded my name, which he wrote down. Without my permission, he took a photo of my face with his phone to send to “central.” He also insisted that I hand over my cellphone and delete any protest photos.

The official also accused me of supporting YATAMA and of even working for the CIA – a potentially grave accusation in a country still reeling from the U.S. infringements of the 1980s. I insisted I was a poor graduate student incapable of backing any foreign political party and that I did not work for any government agency. (I was tempted to point out that a CIA agent would have nicer transportation than the local 18-hour “chicken” bus from Bilwi to Managua I was taking, but decided that snark would not help in this situation.) Finally, the official let me go and I boarded the bus. I have never been so relieved to take a seat and settle in for the grueling ride to the capital as I was at the moment the bus finally puttered out of the tiny Bilwi bus depot.

Upon arrival on the Pacific side of the country, a few of my friends joked that I needed to go buy some pro-FSLN swag to help improve my image in the eyes of the government. The Pacific side of Nicaragua was mostly calm after the municipal elections, and most of the people I spoke with dismissed the chaos in Bilwi as something unique to the dynamics on the indigenous-dominated and long-fractious Miskitu Coast. Yet, no Nicaraguan I spoke with was surprised by my tale of police harassment and voter suppression. The most common response to my depiction of the ways the FSLN had strategically manipulated the election outcome was laughter; this was all very old news to Nicaraguans.

Now, in April 2018, the protests are not specific to an election, led by an opposition party, or isolated in a remote part of the country. The protests are occurring all across the heartland of supposed FSLN support. The below photo is from Friday night in León, where the FSLN won the 2017 municipal elections with over 80 percent of the vote. While the government says right wing-backed criminals are responsible for the vandalism, witnesses say it was the Sandinista turbas who were, quite literally in this case, pouring gasoline on the fire.

Some Nicaraguans tell me that the situation has started to calm down. Others say it is just the calm before the storm. Regardless, even if things settle down this time, the mask of democracy has been torn off the Ortega regime. So far, during less than a week of protests, at least 63 people have been killed*, and many more are injured or missing. Nicaraguans are now publicly speaking out against their repressive government, and hundreds of thousands are taking to the streets. Yet, dictators rarely cede power in response to protest, and so this struggle is unlikely to be a fast or an easy one.

I initially wanted to write about what I witnessed in Bilwi, but I decided to stay silent, for the same reason that Nicaraguans do not like to talk about politics on the street: speaking out against the Ortega regime almost always has consequences in Nicaragua. This government has expelled several researchers and academics before me, threatening them along the way. But, now, like so many of my friends in Nicaragua and on their behalf, I am enraged by what is happening. It is hard to silently watch the videos of a journalist being shot in the head in a city that I have come to consider a second home, or of students and protestors being beaten, abducted, and even killed by government forces along streets I have walked too many times to count. As a friend in Managua recently told me, “it is difficult to feel so impotent, but you know what is beautiful? To be next to someone who you do not know but you help and you defend because they believe in the same thing you do.” I cannot be on the streets of Managua marching with the protestors right now, but I can provide a voice that amplifies the calls of those protesters – and as an academic, further evidence that supports their cause.

4/27/2018 – We previously reported that 30 people have been killed. That number has been updated to reflect current information