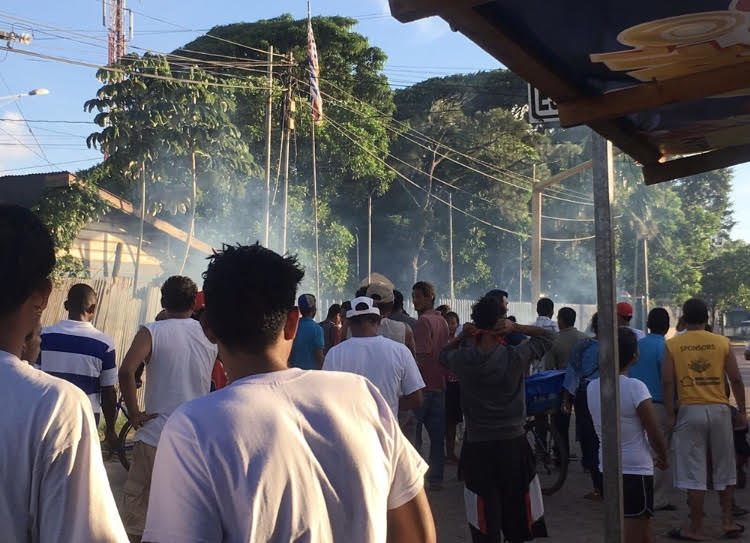 On Saturday, Nov. 11, members and supporters of the Miskitu indigenous party, Yapti Tasba Masraka Nanih Aslatakanka (YATAMA) crowded into their burnt down compound to celebrate their thirtieth anniversary. Over one thousand people were present, including many from surrounding villages that came to listen to the party’s political leader and congressman, Brooklyn Rivera.

The celebration came just days after riot police and military were flown in from Managua to control dissent following Nicaragua’s municipal elections. YATAMA and its supporters roundly denounced the election results on Nov. 5 that deposed them of control of the municipalities of Bilwi, Waspam, Prinzapolka and Awaltara.

YATAMA’s supporters, who took to the streets in protest of the results—which YATAMA deemed fraudulent—were met with violence by military and paramilitary forces carrying automatic weapons.

“We were protesting electoral fraud,” said the party’s leader, Brooklyn Rivera. “We were protecting our people. We were not expecting the military or the police to attack. Our youth tried to resist the attack, but you cannot fight back with rocks when they have machine guns.”

The violence in Bilwi reached a new low when YATAMA’s headquarters was set on fire Monday night. At least part of the event was caught on film, but no one has taken responsibility for setting fire to the compound.

People talking, imperceptible
They are making a fuss (People laughing)
Indeterminate sounds
Here is the police
What are you recording, asshole?
They destroyed everything
This is very dangerous

They are throwing stones
(sounds)

11.43 they are going to burn everything with gas, the motorbike, the radio…
12.05 they took the speakers, the computer
13.20 They shot four more people
14.23 we are getting closer, let’s see what is in there
14.28 everything got on fire, everything is burned
15.44 Viva Sandista
15.46 They are burning the house and the radio
Sounds and voices
18.04 Recording live how this shit house of Yatama is burning, sons of the bitch, bad boys, now you suffer
18.37 they are taking everything, tomorrow they are going to be selling computers, bikes, cells phones…
19.06 bring your popcorn, the house will be on fire
19.20 radio for radio, party for party, let’s see what is going to happen tomorrow

YATAMA and many residents of Puerto Cabezas-Bilwi say that local residents are not responsible.

Brooklyn Rivera, who was in his office when the building was set ablaze, insists that it was the police and army. “I was inside there when they attacked. It was not the Sandinista youth or local Sandinista members. It was the army and the police who did this, not our local people. This violence was organized from Managua,” he said.

IC confirms that party leadership has been harassed, attacked and threatened by military and paramilitary personal as government forces laid siege to the city. “The burning of the YATAMA house, the radio station and the destruction of the Indian statue came directly from the special forces of the police, not from some local Sandinista group,” said Mr. Rivera. “The leadership of YATAMA is not fighting, we are here accompanying our people.”

These allegations suggest that the post-election unrest in Bilwi is not a local conflict of “Miskitu versus Miskitu,” but rather a government crackdown on indigenous resistance. There are currently one hundred and three political prisoners in Bilwi following the municipal elections, and the arrests of protesters throughout the country show that distrust of the democratic process in Nicaragua is not isolated to the Atlantic Coast.

Mr. Rivera was pleased to have peace during the party’s celebration, and he is already planning a path forward to remain a pillar of support for the indigenous population. “We must rebuild, it is important that our people have staples of communication and resistance like our radio station to keep unity in our communities.”

It has been a difficult week for the party, as it comes to terms with the iron grip of militarization. The aftermath of the election has left many questioning if YATAMA should direct itself away from a political agenda, when each election is met with allegations of fraud and violence.

Mr. Rivera understands this sentiment and frustration, citing a recent resolution by the Inter-American Court of Human Rights, he commented, “We are violating our own rights by participating in this election.”

When asked why the national government has exhausted so much power to prevent YATAMA from succeeding, Mr. Rivera did not hesitate. “They are trying to colonize our people and our land to control our natural resources. We resisted, and now they are trying to totally destroy indigenous organization.”

As relations between YATAMA and the Ortega administration continue to deteriorate, residents are beginning to accuse the government of resorting to the same kind of reactionary violence seen in the 1980s. For now, the city remains peopled with military personnel, as YATAMA plans to reopen its radio station and reconstruct its pillars of resistance.