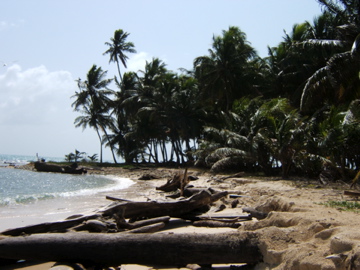 In 2002, indigenous rights attorney Maria Acosta positioned herself at the forefront of a controversial land rights case that brought the pristine lands of Nicaragua’s Atlantic Coast to an international spotlight.

Local indigenous communities learned that the island region, which has been part of their culture for generations, was being sold to private owners directly over the Internet. Forced off their traditional lands, Maria was their hope for justice.

But that hope soon became a profound personal tragedy. On April 8, 2002, Maria arrived at her home in Bluefields to find her husband had been brutally murdered.

Then, as the investigation began, the tragedy turned into fear: While being interviewed by journalists Maria concluded, “I think somebody was sent to kill ME.”

Soon after there was silence. The media dropped the story, indigenous leaders retreated, locals stopped talking, and Maria pulled away from the case.

Now, Maria breaks the silence about what really happened in Bluefields and the events that set the stage for the murder of her husband.

The disputed lands continue to be sold online by Peter Tsokos, www.tropical-islands.com

Learn more about the Film »