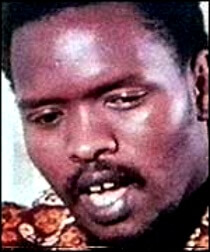 The Life and Death of Steven Biko

“We do not want to be reminded that it is we, the indigenous people, who are poor and exploited in the land of our birth. These are concepts which the Black Consciousness approach wishes to eradicate from the black man’s mind before our society is driven to chaos by irresponsible people from Coca-cola and hamburger cultural backgrounds.” Steve Biko, 1978

From South Africa’s 9/12, a Tribute to Steve Biko
On 12 September 1977, Stephen Bantu Biko, aged 30, died of brain damage from severe beating sustain while in police custody. Steve Biko was a co-founder of the Black Consciousness Movement, along with Dr. Barney Pityana.

Steve Biko left a legacy of positive thought, social consciousness and responsibility and a belief in the positive identity that everyone should have about themselves.

Steve Biko was instrumental in setting some wheels in motion, which were to bring the struggle of Black people in South Africa against Apartheid. His primary stance was for improving the lives of his people and it started from the Pro-Black platform that started during his student days from he was studying Medicine at the University of Durban (Black Section – the distinction was made in those days) in 1966.

Steve Biko and some friends founded the South African Student’s Organisation in 1968. It was formed because of the frustrations they experienced from liberal students in the National Union of South African Students, which seemed interested in improving the lives of black students but never really helped to get anything concrete and radical done. Although it was initially aimed at improving the lives of students, there was strong support to start a politically aligned student organisation. Another organisation was formed, which became instrumental during the Student Uprisings in 1976 – an event at the height of the struggle, that also accelerated the struggle.

Steve Biko was expelled from medical school but went on to work on the Black Community Programs which was involved in several community projects. In 1973, Steve Biko was banned and restricted to King Williams Town, a town in the Eastern Cape near the southern coast of South Africa. Despite the banning order, Steve continued his community works and also set up a Trust Fund for political prisoners and their families. He also set up a Trust Fund to aid black students.

Biko carried out many works for his people and was thus a target under the Apartheid regime. In August 1977, he went to Cape Town with friend Peter Jones for a conference for black unity. However, all the meetings were cancelled, which they thought was unusual and suspicious. They then left Cape Town without notifying anyone. On 18 August, on their way back to King Williams Town, they were arrested at a road block and detained in different jails under the notorious Terrorist Act. The series of events that followed led to Steve Biko’s untimely death on 12 September 1977. State doctors at the time said he was suffering from minor head injuries even though they knew he was severely injured by the police. He was transported to Pretoria in this state where he died of brain damage.