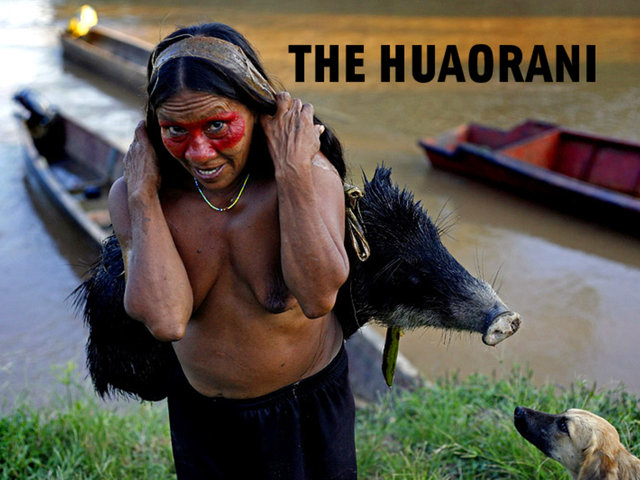 There is more than one side to every story. The tale of the Huaorani is no different. As we continue to witness the destruction of their homeland in the world’s largest rainforest, it is impossible to ignore how our own fate is linked to theirs.

Note: Raul Paz Pastrana, the Director of “The Huarani: Savages of Oriente/Protectors of the Forest” is currently trying to raise funds for this important film, the story of the Huarani (Waorani) People. To help make this film happen please visit: http://www.kickstarter.com/projects/34840787/the-huaorani-savages-of-oriente-protectors-of-the

Deep in the heart of the Amazon jungle, the story of one of Ecuador’s oldest and most isolated indigenous groups has too long been told by the oil company executives intent on exploiting Huaorani land for profit and the zealous missionaries whose ten commandments forbid such behavior. Throughout the years, these groups have portrayed the Huaorani as a dangerous and excessively violent tribe of “savage” cannibals highlighting incidents such as the tribe’s massacre of a friendly missionary group in the 1950’s and the tribe’s murder of Texaco oil workers in the early 1980’s. Yet there is more to this story than meets the eye. This film will offer the Huaorani, on the brink of extinction, “one last chance” to tell their side of the story before it is lost forever.

This documentary captures the latest attempts by multinational oil companies to drill in protected Huaorani territory inside of the Yasuni rainforest reserve. The film follows Huaorani like Shaman Kemperi, one of the oldest living tribal members who explains the Huaorani creation myth and how the gods tasked the Huaorani with “defend(ing) the forest.” Huaorani tribal leader Penti, the son of warrior Ahua, will tell the story of how the Huaorani have traded their hardwood spears for legal documents in the fight to protect their home and culture from the missionaries, oil companies, and Ecuadorian government initiatives to drill in their ancestral forest. While another tribal member, Fabian explores the difficult decisions faced by modern Huaorani youth to preserve their cultural traditions and homeland or support their families by accepting work with the oil companies.

There is more than one side to every story. The tale of the Huaorani is no different. As we continue to witness the destruction of their homeland in the world’s largest rainforest, it is impossible to ignore how our own fate is linked to theirs.

To learn more about what’s going on in the Yasuni National Park, visit http://www.sosyasuni.org and http://www.yasunigreengold.org