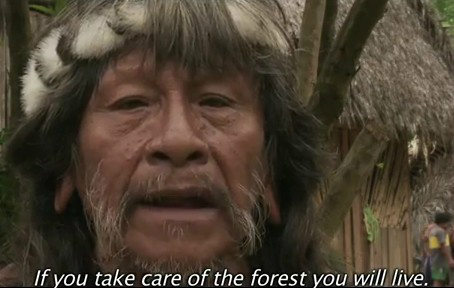 The following videos were filmed by a guest of the Huaorani People of Yasuni in 2011. They were subsequently posted on YouTube so the world could hear the Huaorani speak for themselves.

A number of other videos are on the internet in which the Huaorani also speak. But in those videos, you will also likely hear someone else who doesn’t necessarily have the Huaorani’s needs and interests at heart.

The Huaorani want be heard and respected by outsiders who want to make decisions that would affect them.

The communities represented in the videos–Bameno, Bowanamo, Gabaro and Wema–are doing much more than making films. First and foremost, they have organized themselves to defend Yasuni,their culture and way of life; and to protect the human rights of other indigenous peoples in Yasuni, including their “uncontacted” neighbors (Tagaeri, Taromenani, and Tademoede Huaorani) so they may “live free” in isolation in their forest.

The are also pressuring the President of Ecuador, Rafael Correa, to leave the Yasuni Rainforest alone and to finally recognize their land rights. In their own words,

“Something of this great rainforest territory must remain for us, the Huaorani, where we can continue to live freely and in accordance with our culture, without oil companies, settlers, roads, military and security forces, loggers, bureaucrats, or other outsiders damaging the forest or telling us how we should live. We need a legal title to our territory, and reforms to the laws of Ecuador to protect Ome and our right to live as we wish, as Huaorani.”