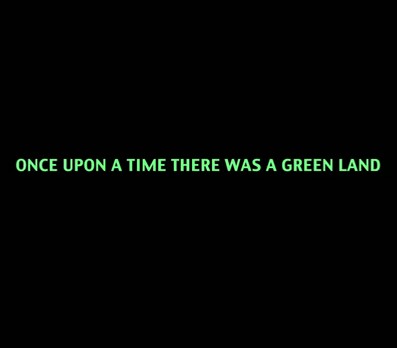 The Dark Side of Green

In the southern region of Mato Grosso do Sul, on the border of Brazil and Paraguay, the most populous indigenous nation of the country silently struggles for its territory, trying to contain the advance of its powerful enemies.

Expelled from their lands because of the continuous process of colonization, more than 40,000 Guarani Kaiowá now live on less than 1% of their original territory. On their lands today, there are thousands of hectares of sugarcane put in place by multinational enterprises that portray ethanol to the world as an “environment friendly” and “clean” fuel.

Without their lands and forests, the Guarani Kaiowá have for years coexisted with a malnutrition epidemic. And with no alternative means of subsistence, adults and children are exploited in the cane fields, exhaustively working day-in, day-out. In the production line of the so-called “clean” fuel, the Federal Public Prosecutor constantly sues the owners of the plantations because of their child labor and slave labor practices.

Amid the delirium of the “green gold fever” (the way people refer to sugarcane), indigenous leadership finds death as their fate–death ordered by the big farmers.

“The Dark Side of Green” [Original title: À Sombra de um Delírio Verde] tells the story of how the Guarani-Kaiowá indigenous people in Mato Grosso do Sul, Brazil, are hit by a booming ethanol sector.

The introduction starts with Orlando Juca, a 52-year old man who has to get up every day at two in the morning, to catch a bus that takes laborers like him to the sugarcane fields. We see him walking through the dark night with a bad leg. He was crippled by an accident but he cannot stop working because he has to maintain his family. His only son who helped him supporting the family, died in a sugarcane field.

The camera follows Juca’s daily journey and shows how the cane choppers arrive by daybreak at the plantations that have been burnt during the night, to facilitate the harvesting. Juca explains that harvesters are paid by weight and have to work long hours every day to earn something.

Mato Grosso (the Brazilian state where the film is made) means “thick forest” in Portuguese. The Guarani-Kaiowá lived here long before the trees were cleared for cattle ranches and soy plantations that stretch endlessly towards the horizon. Today, the expanding sugarcane monocultures are a new threat to their traditional way of life.

The film illustrates the natural habitat that just a few Guarani-Kaiowá communities have preserved. This traditional lifestyle is at stake: the hunting and collecting food in what is left of pristine forests; the cultivation of small patches of land and the fishing in clear rivers.

Misfortune clouds transfer us to the urban jungle of Sao Paulo, the economic heart of Brazil. Climate change and energy shortages are creating an unprecedented thirst for alternative energy, with ethanol leading the way. Brazil is pioneering the use of ethanol as a vehicle fuel. The congested streets of Sao Paulo are packed with cars that run off both agro and fossil fuel mixtures. Ethanol already replaced half of Brazil’s petrol consumption.

Currently a promotional clip is being developed that will include President Lula announcing a pact between the U.S. and Brazil to stimulate the ethanol production. The clip must show the megalomania of the ethanol fever and the powerful business that is behind it. Miss Geraldine Kutis is the international advisor for Unica, the largest association of sugar and ethanol manufacturers in Brazil. The aim of Unica is to spread the green gold fever around the world. Kutis talks about Brazil’s objective to turn ethanol into a global commodity. Unica is opening offices in the world’s economical and political power centers (Washington, Brussels and Beijing) to weigh upon decision-making. The camera zooms into the spinning stock market that symbolizes the greediness of the business. As Geraldine Kutis puts it: “In terms of expansion… the sky is the limit!”

Subsequently, the film heads back to the state of Mato Grosso do Sul, where machines are paving the way for many new ethanol mills that are financed by foreign venture capital. Rising demand for ethanol is a golden opportunity for local landowners and for the agro industry. Growing sugarcane is so profitable that its acreage is expanding rapidly. Land values have at least doubled over the past year. Eduardo Corrêa Riedel, vice president of Famasul, the agriculture federation, gives us some exact figures.

But not everybody is applauding the ethanol boom in the region. Labor union leader Onorail Jerônimo Porto highlights its dark side. He warns for the excessive use of toxic agrochemicals and shows us the dirty sewage coming from the ethanol mills. Onorail’s concern for the sewage leaking into the rivers and contaminating them, leads us to Kaiowá-leader Jorge Gomes, who metaphorically expresses the crucial importance of clean rivers.

Kaiowá is a Guaraní word, meaning ‘forest people’. The Kaiowá are a deeply spiritual people, seeking the ‘land without evil’, a place revealed to them by their ancestors. In Mato Grosso do Sul, the Guarani-Kaiowá are desperately campaigning to protect their land that is crucial for their survival. Profesor Antonio Brandt reveals how surprised the Spanish colonizers were by the quantity and the variety of food they found in the Guaraní communities. Without land and natural resources, these people cannot hunt or cultivate sufficient food. More than ninety percent of the Guarani-Kaiowá now depends on food baskets from the government. But these food supplies are insufficient to cover their daily needs. Many children are undernourished and suffer from poor water quality. Since 2005, more than fifty Guarani-Kaiowá children have died after suffering malnutrition.

For Kaiowá-leader Carlito de Oliveira it is clear that only land can guarantee food sovereignty for his people. Public Prosecutor Charles Pessoa explains how the indigenous people have been expelled from their traditional territories throughout history. They were pushed into reserves, created by a developing society and, so he states, the lack of land is the main cause for their misery. Today, some reserves, such as that of Dourados, are comparable with the slums in Brazil’s big cities. The rapid expansion of the sugarcane production has exacerbated the problem. Indigenous reservations have become cheap-labor havens for the ethanol industry. Adel Fernandez Villalva states that almost all men work in the ethanol factory because they have no other choice. They have no education, no land and no tools. They compare themselves with imprisoned monkeys.

A video from the Labor Ministry illustrates the hazardous accommodation and the degrading, slave-like conditions these men have to endure.

Since work in the sugarcane fields is so tough, it’s mostly youngsters, in their late teens and early twenties who are being recruited. Poverty and despair is what drives these teenagers away from school and into the cane fields. The same happened to Reginaldo Ferreira Rossato, who was recruited when he was just 16 years old. His contractor gave him a drug to endure the very tough machete cutting. Labor Ministry Prosecutor Cícero Rufino Pereira confirms that indigenous adolescents are indeed recruited in the Mato Grosso factories.

At this the point the film returns to Orlando Juca, the sugarcane harvester from the introduction. Orlando’s son was only fourteen when he was seduced to leave school and earn money in the sugarcane fields. He died in an accident at the age of fifteen. He got contracted under a false identity, according to which he was 23 years old. The factory never recognized the kid’s real identity and therefore Orlando Juca is denied any indemnification whatsoever.

When Kaiowá-leader Carlito de Oliveira starts crying, the despair is complete. Professor Antonio Brandt insists that the only solution is to demarcate territories. He notes that the Kaiowá are demanding small areas and the return of these lands will not impede the agro-business. Yet, they are not even obtaining that. Famasul’s vice president Eduardo Corrêa Riedel: “Land demarcation is done. If you go back to the origins of Brazilian civilization, then we should give all the land back to the indigenous people.”

The case of Nanderu Marangatu (2005) illustrates the almightiness of the landowners: through local justice departments they manage to retake land even after it is homologated as indigenous territory. The copyright holder of the stock-footage is a Dutch public broadcasting company LLINK and is provided royalty-free.

Despite the brutal repression of those re-occupying their native land and many indigenous leaders having been (and still being) assassinated, the ardor of resistance grows.