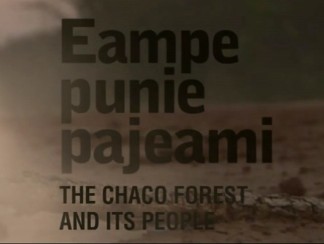 The Chaco Forest and Its People

“Eampe Punie Pajeami – The Chaco Forest and Its People” documents the work of the Amotocodie Initiative and Ayoreo leaders to support – from a distance – groups of uncontacted Ayoreo in the Chaco Forest and to protect their rights to life and self-determination.

Between 1959 and 1987, almost the entire Ayoreo population in Paraguay was deported from their vast ancestral territory to various missionary settlements, where they were forced to abandon their way of life and adopt a sedentary lifestyle. On several occasions, the Ayoreo were also displaced so their land could be used for farming. As a result, their territory was cut down from approx. 11 million hectares to 190,000 hectares

The Ayoreo population today is estimated to be about 5,600 people; however, almost none of the Ayoreo are living freely within their ancestral territory. Rather, they continues to live a sedentary lifestyle in various settlements located in both Paraguay and Bolivia.

There is, however, one local group, the Totobiegosode, who is living in voluntary isolation in area within the Chaco forest known as the Amotocodie. There, “the Totobiegosode live nomadically, hunting, gathering fruit and honey, fishing and cultivating small plots which they plant ‘on the go,’during the rainy season. They constitute, with their habitat – high and low forests, palm groves, open fields, dry riverbeds, streams, and lagoons – an inseparable unit and live communally. Although no one has any direct contact with them, their existence can be felt and verified by signs of presence such as footprints and holes in trees that show that they have been harvesting honey. In some cases, they have even been seen in the distance,” explains the World Rainforest Movement.

According to Survival International, “the greatest current threat to the Totobiegosode is a Brazilian firm, Yaguarete Porá. It owns a 78,000 hectare plot in the heart of their territory, very near where uncontacted Ayoreo were recently sighted… Yaguarete plans to bulldoze most of it to create a cattle ranch – this will have a devastating effect on the Indians’ ability to continue living there,” says Survival.

To learn more about the Ayoreo’s struggles in Paraguay, read the IWGIA’s May 2010 report, The Case of the Ayoreo

For more news and updates on the Ayoreo, visit EcoAnth in Action and Survival International.

To support the Amotocodie Initiative‘s work, please visit their website