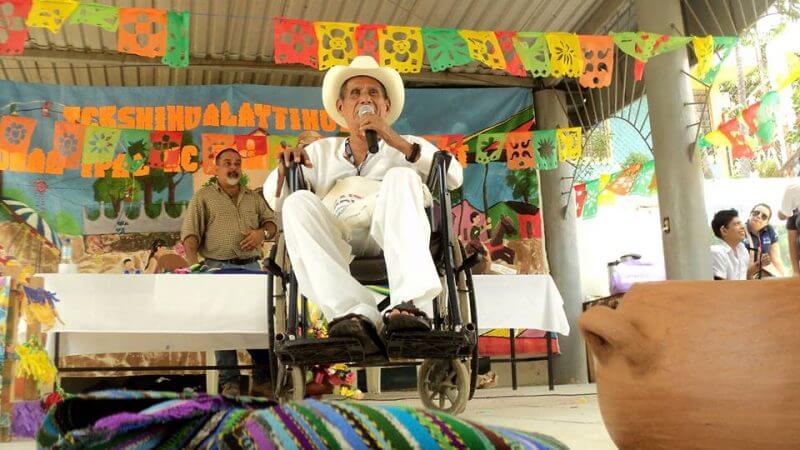 Tata Genaro Ramírez: The Farmer Who Revived the Nawat Language in El Salvador

The Nawat speaking community in El Salvador lamented the passing of Genaro Ramírez, the Salvadorean who dreamed that the Nawat would live on. He was the first teacher of the language, but not the last, because through his hard work, Ramírez left an important legacy in the revitalization of his ancestral language.

The Nawat Pipil is only spoken by 200 Salvadoreans, according to UNESCO.  The vast majority of them live in a small village called Santo Domingo de Guzmán, or Witzapan, in Nawat.  This is the hometown of Genaro where he worked for the regrowth of the language for more than 40 years. He gave free classes every day of the week, from 8 a.m. to 5 p.m.  He had a mission. In the words of Genaro himself:

(…) I understood what that hole was that I had felt for so long in my chest. So I threw my tools in the cornfield because I felt that I could not go on like this, and I […] said to myself: ‘I must teach Nawat even if I’ll starve to death’

Before Genaro, there weren’t any Nawat teachers. The indigenous Salvadorean community had entered a long silence since 1932, when 30,000 people, mostly Nawat pipiles, were executed by the army for having rebelled over the lack of food during the popular revolt in the country in 1932. The uprising was also a peasant revolt and the events, commonly remembered by its perpetrators as La Matanza (“The killing”), are the focus of many debates today.

Global Voices spoke with Werner Hernández, member of the Tzunhejekat Collective, a project that seeks to spread the Nawat language through different means and to make its native speakers aware.  Hernández, a student and close friend of Genaro Ramírez, comments on the situation of the Salvadoran indigenous community:

[The indigenous community] was affected, it hid. They changed their surnames, the way they dressed…their language. Everyone was still speaking [Nawat] quietly when Genaro rose up, the first Nawat teacher. He knew that he was born for that.

Hernández also explained that the first Nawat teacher not only succeeded in redeeming the pride of the indigenous Pipil people for their identity, culture, and language, but also collapsed the walls between the Pipil community and the rest of the country. He built bridges with the outside. It was in this way that other Salvadorans, like Werner, could discover a hidden part of their identity:

It has opened the door to a wonderful experience connecting me, with myself, as a Salvadoran. Thus, as we say in our [Tzunhejekat] collective: the Salvadoran who speaks Nawat sees the country in three dimensions, because we can understand our reality beyond words.

Werner also recalls how the Nawat language is also a gateway to an extensive cultural universe: “There are certain nuances and colors that with only speaking the language, they understand each other. It’s not the same to go see a ballet performance than reading a review of the show [that’s how] reading a translated poem [would be like].” This reflection is also incorporated into debate in the country on the need to invest resources in the ancestral language. “Value and [economic] price is not the same,” Werner adds.

Genaro inspired a new generation of Nawat teachers, he launched the enthusiasm for the documentation of the language, broke taboos, and made the language known in all the political levels of the country:

Today, because of the enthusiasm it generated, there are digital initiatives that help spread the language and protect the indigenous Pipil culture. There are collectives, such as Tzunhejekat and the Nawat Carriers Initiative, linguistic websites such as Tushik and its Facebook group, Nawat blogs such as Chachalaka, and videos uploaded on YouTube.

Genaro Ramírez left a favorable ground for the survival of the Nawat language. “The loss of Don Genaro marks our commitment to revitalize the language,” concludes Werner Hernández.