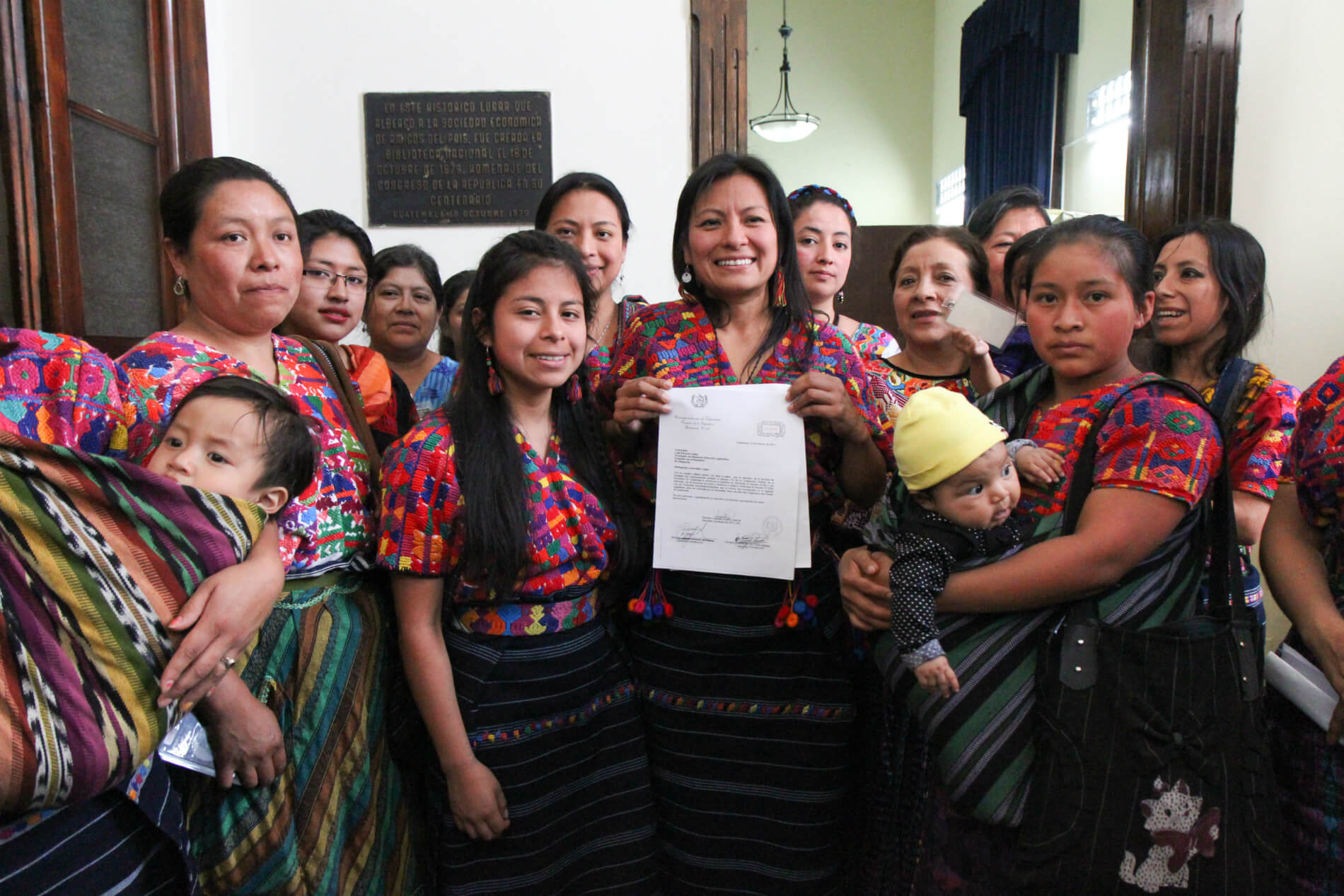 The Maya Weavers movement presenting the proposal for the recognition of collective intellectual property, February 2017. Photo: AFEDES
Support our journalism. Become a Patron!

The National Movement of Maya Weavers think it’s time for Guatemala to safeguard their textile creations and the very fabric of Maya philosophy. But the Weavers aren’t just politely asking for change. Last month, they introduced a new bill in Congress to have their collective intellectual property rights recognized under Guatemalan law.

The Weavers have been working up to this moment for over a year.  In May 2016, they filed a legal action before Guatemala’s Constitutional Court challenging the constitutionality of omitting rules that would protect Maya textile creations. 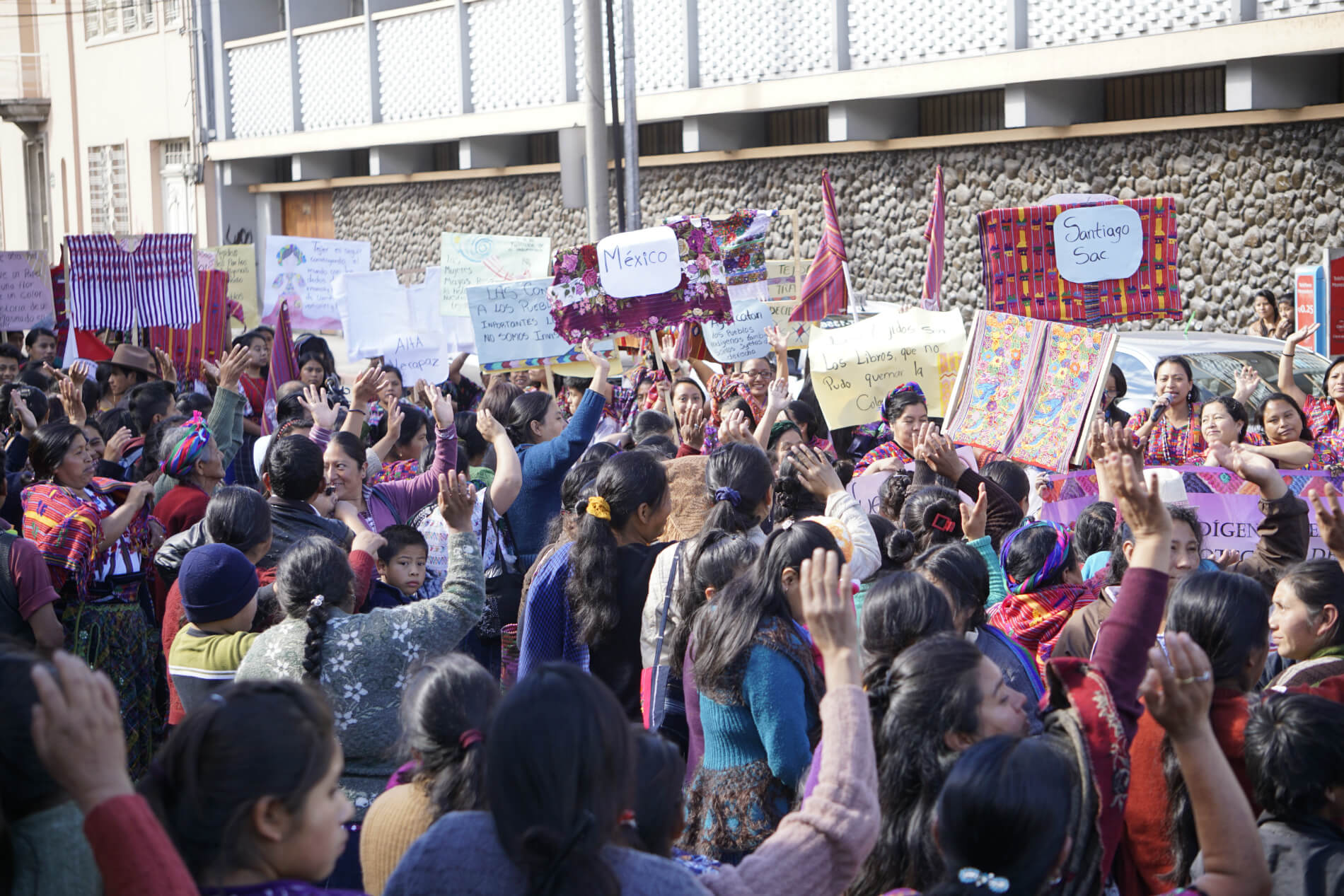 In the months that followed their legal challenge, the Weavers received a broad range of support in Guatemala igniting a national debate that explored the facets of collective intellectual property rights—a concept that advocates Indigenous autonomy—and the Maya women who create huipiles, a cotton dress that contains traditional Maya knowledge.

The Maya Weavers denounce the theft of their textile art as one more form of dispossession.  Made up of some 30 organizations from 18 linguistic communities in Guatemala, the movement is led by the Women’s Association for Development of Sacatepequez, known in its Spanish acronym as AFEDES.

“We must protect our textile knowledge just as we protect our territories,” says Angelina Aspuac, AFEDES weaver and university law student. For her, “intellectual property protection is a fundamental dimension of autonomy.”

In November 2016, the Weavers Movement introduced their bill for the recognition of collective intellectual property to legislators, who then proposed technical revisions. The bill was reviewed by both Weavers and congress members before it was formally presented as new law initiative in February 2017.

After it was formally accepted, Bill N. 5247 received the support of more than 16 representatives. Now the bill must be passed by Congress.

The Weavers know that they have limited support, but they do have a key ally: the Commission on Indigenous Peoples. Among the various representatives who make up this Commission is committee chairman Leocadio Juracán (Convergence Party). Juracán is a grassroots leader who comes from a rural Maya family and was coordinator of the Campesino Committee of the Highlands.

The bill seeks to reform 5 legal articles on the Law on Copyright and Related Rights, the Law on Industrial Property, the Law on Protection and Development of Crafts and the Criminal Code.

The bill has two objectives. First, it calls for a recognition of a definition of collective intellectual property, which is linked to the right of Indigenous Peoples to administer and manage their heritage. Second, it asks that indigenous nations be recognized as authors, in which case they would automatically benefit from intellectual property law. Recognizing indigenous nations as authors just like individuals or companies means that corporations that benefit from the export of Maya hand-woven goods will have to pay royalties to the communities who are the authors of huipiles.

“We are artists,” explains Angelina Aspuac. “The people are the artists and authors. What we ask is that the Indigenous Peoples, not just individuals or associations, be recognized as a collective subject.”

Angelina Aspuac, AFEDES, presents the legal complaints before the Constitutional Court on behalf of the Maya Weavers. Photo: AFEDES

This bill is the most accessible and the most swiftly developed legal reform to come out of Guatemala’s current political context. In the long run, the Weavers hope to create a new law specifically designed to protect the collective intellectual property rights of all Maya weavers.

In addition to securing their intellectual property rights nation-wide, the Weavers are looking to protect their textile art at the community level.  They have been talking with six communities to declare each of their textiles as ancestral heritage.

These communities are declaring textile property according to their own collective institutions, ancestral norms and indigenous justice. However, the authority and autonomy to register the collective authorship of a specific design comes directly from the Weavers.

The history of the Maya Weavers Movement began with a concern for the high cost of thread among AFEDES weavers. In their attempt to resist bulk marketing, AFEDES realized that all the threads were imported by a monopoly that kept prices high.

The Weavers also realized they faced more obstacles to export their hand-woven products than big companies. Export requirements in Guatemala benefit big business but hurt small weavers, who are, for instance, unable to obtain thread certificates.

While the State of Guatemala uses Maya culture to promote tourism, it does not support the indigenous weavers who are discriminated against through the use of commercial pitfalls.

By 2014, women from AFEDES gathered enough motivation to initiate a litigation process to demand that the state generate the regulations needed to protect indigenous peoples’ art.

But this story is about much more than threads and hand-woven goods. Sandra Xinico, a weaver from Patzún, Chimaltenango, explained to Prensa Libre, “It is not just about a handmade piece of cloth, since our hand-woven products are made based on our nations’ worldviews, philosophy and history.”

The Maya Weavers denounce a strong sense of cultural ownership by the State and by Guatemalan companies. When referring to their own textiles, the Weavers  ask that permission be addressed. “They speak about inspiration, but really it is cultural appropriation and we must begin to see it as stealing,” says Aspuac. The Guatemalan newspaper Plaza Pública was explicit in an article titled “Stolen Art: the legal battle of the Mayan weavers.”

According to Juan Castro, one of the lawyers supporting the Maya Weavers Movement, this struggle is more than a legal battle. It is an act of resistance in support of indigenous autonomy. 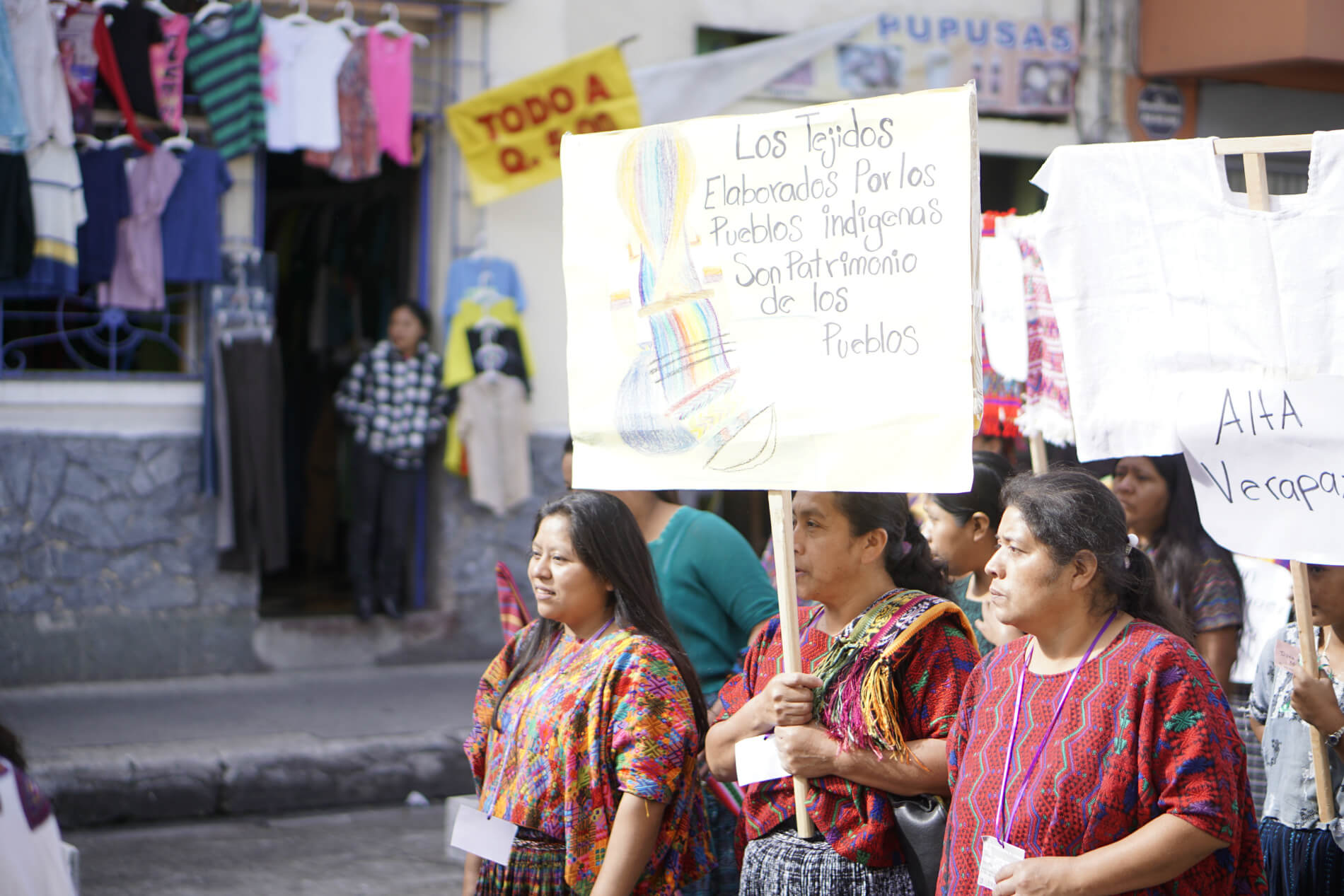 Indeed, the appropriation of Indigenous territories for extractive industries has been accompanied by the systematic expropriation of Indigenous labor and the dismantlement of ancestral knowledge. Not only are Maya women exploited, underpaid and continuously confronted with high levels of violence and discrimination. Export companies are in effect extracting the production of Maya weavers in order to exploit their knowledge and work.

They are also beginning to make machine-made industrial huipiles, erasing the knowledge that people have passed down for generations to increase their profit margins.

In this context, Maya weavers are seeking community solutions such as local declarations of textile heritage. They know that if they can imagine reforming state laws, they also have to protect themselves from the state, a historically racist entity that has orchestrated a long line of Maya dispossessions.

The Weavers pride themselves in self-empowering women in this political process. They proudly delcare that no intermediaries or NGOs will stand as intermediaries: they organize, analyze legal options, inform themselves about how government works and plan out litigation strategies on their own. They also give interviews to the press and meet with government ministers without the support of international NGOs.

“We are a legal entity defending our knowledge and territories through collective property rights—no one speaks for us. We are gaining respect to our people.”