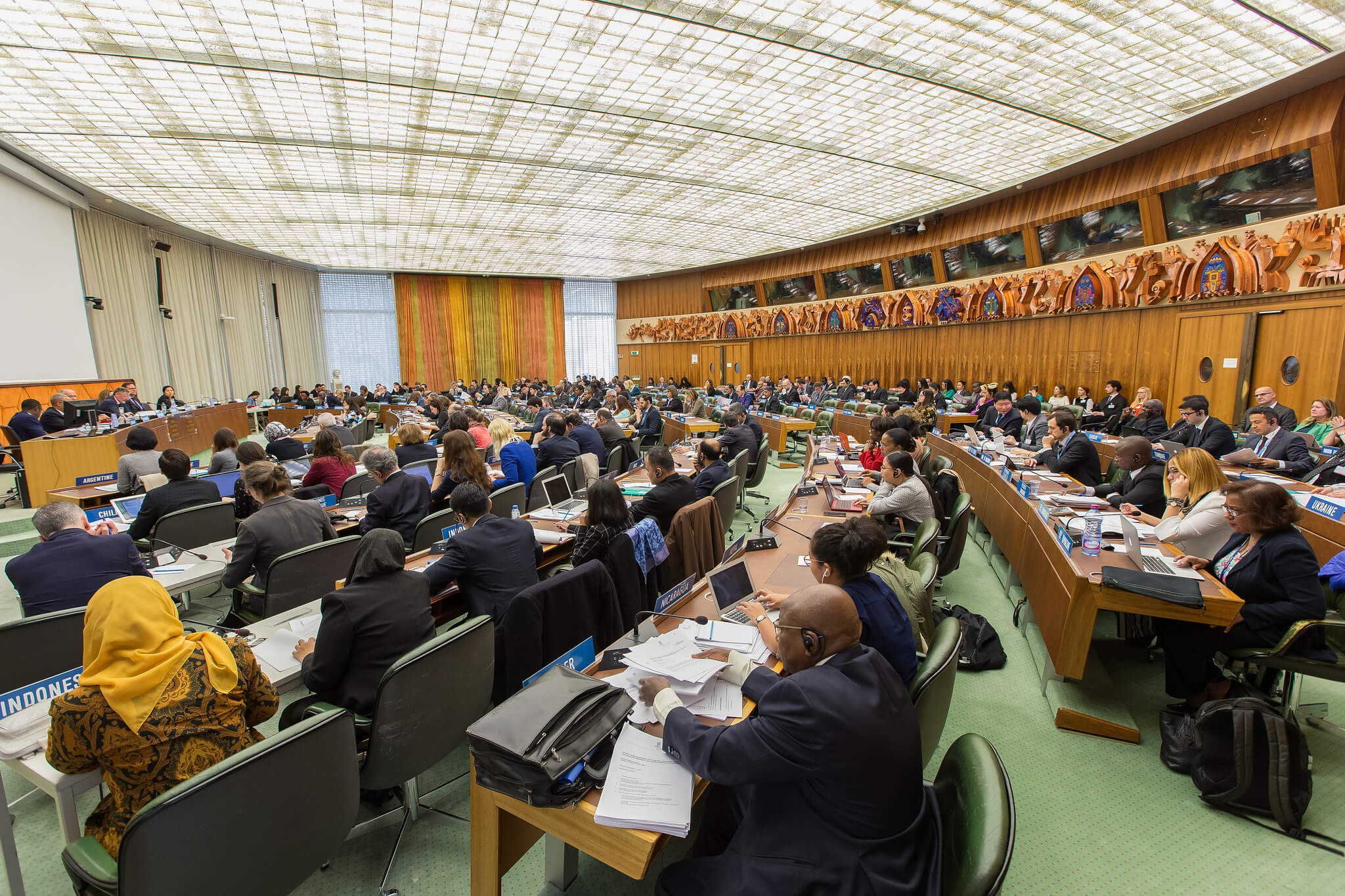 Indigenous Peoples At WIPO Call For Respect Of Their Sovereign Rights, Prevention Of Cultural Genocide

A panel of Indigenous Peoples speaking at the United Nations World Intellectual Property Organization on a potential treaty protecting their folklore from misappropriation asked that indigenous culture be recognised as unique, and not unduly considered as belonging to the whole of mankind. The keynote speaker chastised the United States position in the committee, criticised a US recent document equating the cultural significance of Santa Claus, pizza and sand paintings, and called for the respect of indigenous peoples’ sovereign rights over their cultural expressions.

Intergovernmental Committee on Intellectual Property and Genetic Resources, Traditional Knowledge and Folklore (IGC) is taking place from 27 February to 3 March.

The indigenous panel provided comments on the draft treaty text [pdf] currently being negotiated in the IGC. The committee has been working on the matter of traditional cultural expressions (TCEs, folklore) for the last 16 years. Efforts are being carried out this week to redraft a 2014 text to give a clearer view of different points of views.

The keynote speaker was Professor Rebecca Tsosie, of Yaqui heritage, Regent’s Professor at the James E. Rogers College of Law at the University of Arizona (US), special advisor to the Provost on Diversity and Inclusion, and serving as a Tribal Court judge for the Fort McDowell Yavapai Nation. 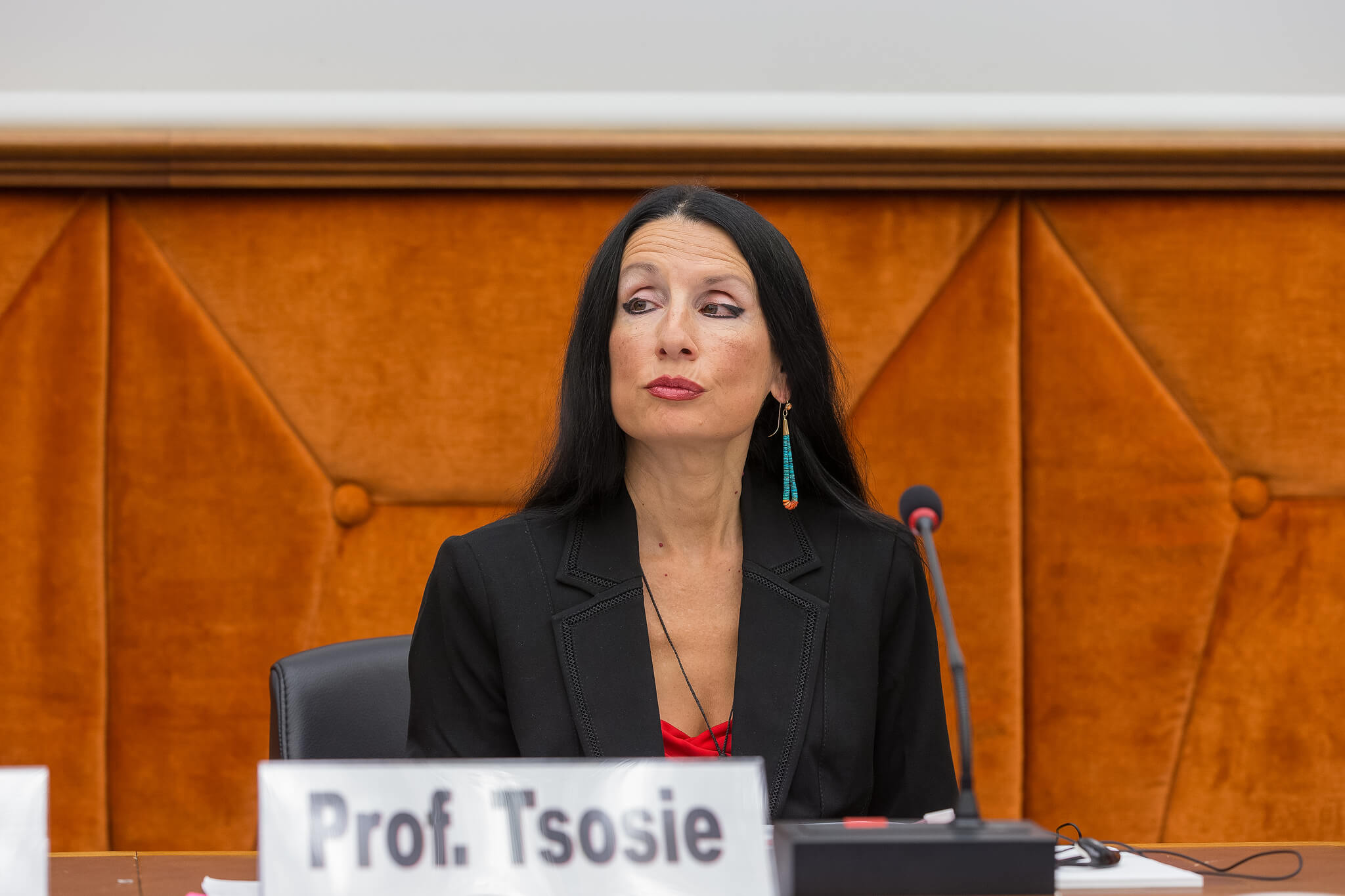 Tsosie gave a vibrant and impassioned statement on the needs of indigenous peoples in terms of protecting their knowledge and traditions at the international level. She delivered a sharp criticism of a discussion paper [pdf] tabled at this session by the US, and the position adopted by the US in the committee, which she implied does not reflect the current US legislation towards indigenous peoples.

On the US paper, which gives a long list of what could be considered as TCEs, including Santa Claus, yoga, pizza, and Native American sand paintings, she said, “I would not want to see an instrument that lumps together a cultural heritage of American Indian Nations with the ‘hip hop’ culture that is emerging in the US as popular culture.”

“The US is a composite of immigrant cultures layered on to an indigenous landscape where the indigenous peoples still live,” she said. “This idea of having snippets of culture such as yoga, pizza, hamburgers, that is an insult to lump indigenous TCEs into that conception of culture,” she insisted.

[Update:] The US government delegate responded to this in a floor statement later in the day, referencing Native American and immigrant heritage but then inexplicably says “that heritage includes baseball, the cowboy boot, the hamburger sandwich, and yes, hip hop culture.” See video clip here.

Peoples with an S!

She also challenged countries opposing the use of the word “peoples” in the text, such as France, which has argued that this would go against its constitution.

“Indigenous peoples, with an s!,” she exclaimed. This is a term of art embedded in the 2007 United Nations Declaration on the Rights of Indigenous Peoples, she said. “There should not be any international treaty, post 2007, that does not refer to that term of art,” she added.

She remarked that draft Article 10 (Relationship with other international agreements), which has not been changed yet this week, notes that the potential treaty should be supportive of other existing international agreements, and should not be construed to diminish the rights of indigenous peoples. The article is heavily bracketed, indicating that no agreement was found on the language of the article.

In over 16 years and 30 sessions of the IGC there has never been a formal consultation with the indigenous nations of the US, in the US – Prof. Rebecca Tsosie

Since 2007, there has not been an opportunity to talk about the rights of indigenous peoples in a collective way at the international level, she said, underlining the importance of the work of the IGC.

She said that in over 16 years and 30 sessions of the IGC there has never been a formal consultation with the indigenous nations of the US, in the US.

There are 567 federally recognised Indian tribes in the US, each of those tribes has full sovereign power over their resources, both tangible and intangible, according to Tsosie. “They, and only they, can speak about their sovereign rights in a consultation process with the United States government,” she said.

Further, the instrument must provide effective governance institutions to assess in particular the question of misappropriation, she said, adding that those institutions should be composed of native peoples as well as the US Patent and Trademark Office.

“This is the only way to have fair and equitable adjudication of the issues that we are talking about here,” she said.

The IGC this week is addressing core issues of the potential treaty: subject matter, beneficiaries, the scope of the treaty, and the “definition of the harm, which we are framing as misappropriation,” said Tsosie.

Under a property rights regime, rights of ownership cannot be transferred, appropriated, or alienated without the consent of the property owner, she said. Tangible property includes land, resources, including cultural property. Cultural patrimony is the property of nations, and also the property of indigenous nations, she said.

Intangible property concerns copyright, patents, trademarks, and other emerging concepts in the jurisprudence, such as trade secrets, Tsosie said. “Misappropriation happens when somebody unfairly takes something of value that has been generated by another, and achieves an economic benefit from that wrongful action,” she explained.

She said that during the colonial era, the doctrine of discovery that prevailed was that indigenous peoples, which were regarded as “uncivilised [and] primitive” could not hold property the same way that European hold property, “therefore that land became a commons for the European nations,” she said.

Regarding intangible property, there is also a commons and it is called public domain, she said, adding that the public domain is an open space for innovation, and is defined as containing what is not protected by private property.

“The danger of the draft document is that it says there are already rights to private property and those will be safeguarded prior to the adoption of the instrument,” said Tsosie. “Those rights may include indigenous rights and we cannot adopt the assumption that just because those rights have not been distilled that they are in the public domain.”

The current draft text defines TCEs in four categories: TCEs in action; material TCEs which include art; music and sound; and verbal and written TCEs.

“There is an effort to put the intangible into those tangible forms, and to talk about how widely they are used, as a way to negate the special meaning that a cultural community has,” she said.

Sacred TCEs, Beneficiaries – Status in US

She also remarked on the “sacred” nature of indigenous peoples TCEs. “The sacred is the domain of the spiritual rights,” she said, and it can only be defined in relationship to indigenous customary law.

As an example, she cited US Federal Law Native American Graves Protection and Repatriation Act of 1990 that for the first time issued a possible protection for four types of tangible property: human remains, funerary objects, sacred objects, and objects of cultural patrimony. The latter of those categories have a specific meaning under federal law, she said, and refer to indigenous tribal law.

If there is a lawsuit about an item of cultural patrimony in the US, it is decided under the tribal law on whether or not that item would be alienated from the indigenous nation, she said. The question of who has the consent to deal with that property also falls under tribal law, she explained, adding that the treaty at the IGC requires the same type of system.

On beneficiaries, she said that in the US, indigenous peoples have a sovereign identity, a tribal law that is recognised by the US government, and a consultation process that is legally required.

“The claims of indigenous peoples are sui generis under US law already and this document must take that into account,” she said.

She also warned against a restrictive view that would limit protection only against economic harm. Even if a TCE is closely held and unique, it can be exempted from protection “because the premise of this document appears to protect [TCEs] against economic harm, but other uses, such as museums, archives, and libraries are considered beneficial uses.”

“The misuse of sacred TCEs can cause profound cultural harm and must be understood within the moral rights of indigenous peoples,” she said.

She mentioned the work of philosophers such as the English philosopher John Locke (1632-1704) who defined indigenous knowledge as “deficient, primitive, and not deserving protection.”

“That is why the US got nominated as a trustee for a ward that could not think for itself,” she said. “Thousands and thousands of tangible items of cultural patrimony and sacred objects got into the museums and archives. It is because they were confiscated from the indigenous nations when their religions were banned under US law as illegal.”

The repatriation law is getting those items back, she said. Repatriation of those items is key to the indigenous survival and their right of self-determination, she added.

The two respondents on the panel were Kanyinke Sena, member of the Maasai Peoples of Kenya, and lecturer at the Egerton University School of Law, Nakuru, Kenya; and Lucia Fernanda Inácio Belfort Sales, member of the Povo Kaingáng Peoples in Brazil, executive director of the Instituto Indígena Brasilero da Propriedade Intelectual (InBraPi). 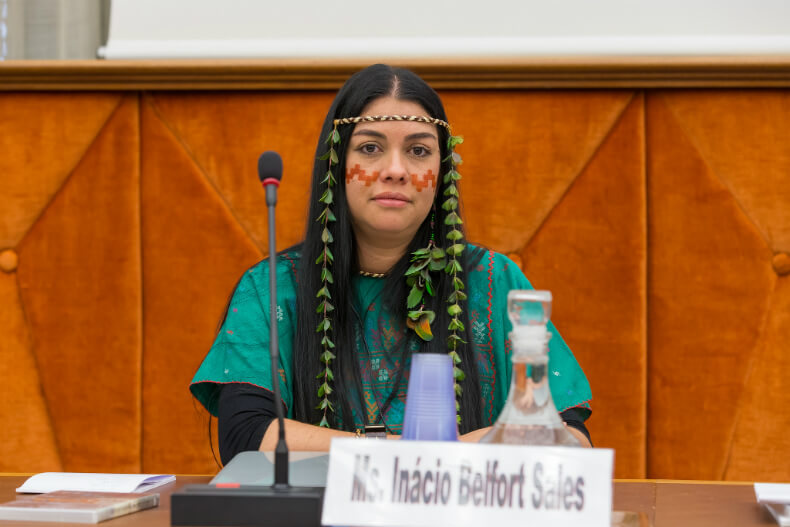 Kanyinke remarked that most of the text in the draft article (2014 version) remains bracketed and it is important to agree on objective minimum standards to that member states can design specific TCEs law informed by national circumstances.

The definition of misappropriation should be broad enough to prevent wrongful appropriation, he said.

Inácio Belfort said 0.4 percent of the Brazilian population (some 870,000 people in 2012) belong to 305 indigenous tribes, and practice 274 different languages.

She also voiced concerns about including the concept of protecting the public domain into the objectives of the potential treaty, which would only lead to more exploitation of indigenous TCEs, she said.

She advised against using a timeframe as an eligibility criteria because of the evolving nature of TCEs, and gave several examples of indigenous designs having been misappropriated, calling for repatriation of misappropriated TCEs. She called for the IGC to consider the particular place of women in the creation, generation, and maintenance of TCEs, and remarked that the draft document does not mention gender.

The IGC should prevent cultural genocide, she said.

This article was originally published at Intellectual Property Watch. It has been re-published at IC under a Creative Commons License.