Systemic Discrimination in the Supreme Court 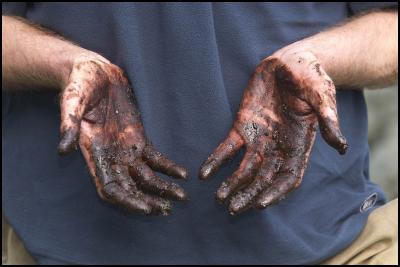 On Wednesday, the Supreme Court issued a ruling that literally punishes Alaska Natives for the 1989 Exxon Valdez Oil Spill. The court told the company that they now only have to pay a tenth of the $5 billion in punitive damages that were awarded by a jury 14 years ago.

“Exxon knew this would happen,” writes Greg Palast. “Right after the spill, I was brought to Alaska by the Natives whose Prince William Sound islands, livelihoods, and their food source was contaminated by Exxon crude. My assignment: to investigate oil company frauds that led to to the disaster. There were plenty.” He continues,

But before we brought charges, the Natives hoped to settle with the oil company, to receive just enough compensation to buy some boats and rebuild their island villages to withstand what would be a decade of trying to survive in a polluted ecological death zone.

In San Diego, I met with Exxon’s US production chief, Otto Harrison, who said, “Admit it; the oil spill’s the best thing to happen” to the Natives.

His company offered the Natives pennies on the dollar. The oil men added a cruel threat: take it or leave it and wait twenty years to get even the pennies. Exxon is immortal – but Natives die.

And they did. A third of the Native fishermen and seal hunters I worked with are dead. Now their families will collect one tenth of their award, two decades too late.

The Supreme court issued a second insulting ruling on Wednesday, surrounding the Cheyenne River Sioux Nation in South Dakota. According to Indianz.com , Tribal members were trying to sue a non-Indian bank for breach of contract and discrimination. The court, however, ruled that Cheyenne River “does not have jurisdiction over a non-Indian bank doing business on the reservation.”

In recent history, there have been a number of similar decisions by the US Supreme Court. For instance, there was the refusal to stop an industrial hog farm on Sioux Land, the the infringement of Apache Lands, and the numerous rulings that deprive the Western Shoshone of their Treaty Rights.

“The Court has rarely ruled in favor of tribes and their governmental authority in recent decades,” writes Professor Robert J. Miller, author of Native America, Discovered and Conquered. “In fact, various studies have demonstrated that since William Rehnquist became chief justice in 1986 tribes have only won about 20% of their cases in the Court. In contrast, criminal defendants won about 34% of their cases before the Rehnquist Court! And that Court was considered a conservative ‘law and order’ Court!”

“This situation leaves tribes with no recourse but to look to Congress and the Executive Branch for support in enforcing their laws and authority in their territories, Indian reservations,” he adds.

While the exercise of sovereignty must remain separate from the state, as something that exists whether or not the state recognizes it, Professor Miller is right to say there must be action on a National/Federal level. This matter cannot be dealt with in a courtroom. And nor can it be dealt with in isolation to other indigenous Nations.

That’s because the core issue here is not law but policy (belief, preference, and convenience). That’s always been the case throughout America’s long history of systemic discrimination against anyone who is not a white, christian, heterosexual male.

As such, If Indigenous Nations do not start coming together and working to shift American Policy to one that represents their needs and best interests, their Treaty rights will continue being erased, their traditional lands will continue being usurped; and, like in the case of Exxon, they will continue being forced to carry the burden of other peoples mistakes while getting punished for doing nothing wrong themselves.

Unless we come together, this will continue until there’s no such thing as an Indigenous Nation.