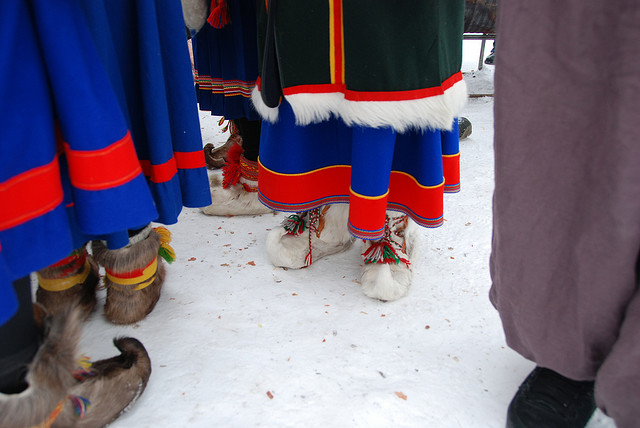 At least four Indigenous Saami communities are standing up to Australian and British mining companies that want to exploit the Saami’s customary reindeer grazing lands in Northern Sweden.

Late last week, the communities of Sirges and Jåhkågasska in Jokkmokk warned that the British mining company Beowulf is in breach of its own ethical guidelines for refusing to engage them meaningfully and in accordance with international human rights conventions.

The British company is pursuing a new iron mine that could negatively impact the Saami’s grazing lands, “without which they cannot continuously pursue their traditional reindeer herding,” says the National Saami Association.

“In contrast to what Beowulf has reported to its shareholders, the company has not shown any willingness to cooperate with Saami communities, as required by international conventions. This is demonstrated by the company’s refusal to assist the communities’ participation in impact assessments, which are necessary to obtain knowledge of how the proposed mining would impact upon the Saami communities and their land uses,” the National Saami Association continues.

“Beowulf’s behavior is extremely disrespectful. It suggests both a great reluctance to engage with Indigenous People and a lack of knowledge of indigenous rights. Mineral exploration in an area inhabited by Indigenous People requires indigenous consent to the project. But this also assumes that the company engages with the affected indigenous community, and this is something Beowulf has not done” says Mattias Pirak, Jåhkågasska tjiellde.

“The Sami culture within the municipality is alive and vital. Reindeer husbandry and its ancillary industries have helped to create a living landscape, both historically and into the present, as recently confirmed by the established of the World Heritage area of Laponia, instituted with respect for the unique nature and culture that have long existed in the area. Any mining project will not only affect our communities, but also neighbouring ones” says Jakob Nygard, Sirges Saami community.

A large increase in traffic to and from the mine could also have a major impact on the Reindeer. As the National Saami Association concludes, “Reindeer herding requires large tracts of land in order to survive and the municipality of Jokkmokk is clearly defined as reindeer grazing area,” which needs to be held intact.

Meanwhile, two other Saami communities are continuing to speak out against Scandinavian Resources’ (SCR’s) proposed iron mines in the Kalix River Valley, less than 200km away from Beowulf’s proposed project.

On August 28 2011, Damien Hicks, Executive Director of Scandinavian Resources (SCR), stated that his company cannot operate in an area without the support of local communities. These were welcomed words the Saami; however, they want to make sure that the company will abide by them. They also want to make sure it will commit to a process of Free Prior and Informed Consent (something they want from Beowulf as well).

Last week, the Minerals Policy Institute attended SCR’s Annual General Meeting (AGM) in Perth to reiterate that message on behalf of the Saami communities of Girjas and Laevas, as well as the Saami Council and the National Swedish Saami Association (SSR).

While at the AGM, the Minerals Policy Institute read out loud a written statement that outlines the Saami’s concerns and asks whether or not the company will engage in a process of Free Prior and Informed Consent as a prerequisite to mining.

Whether or not the company agrees, the two communities have made it clear that they will not accept any mining on their traditional lands.

The Saami Council also sent another invitation to one of SCR’s main bakers, Canaccord Financial Inc., to visit the communities “in order to understand the severity of the human rights breaches concerned and why the communities will never consent to Scandinavian Resource proposed mining activities”. The Canadian investment firm has yet to respond to the invitation.