Still not sure about Stephen Harper’s Plan for First Nations? The respected Mohawk Policy Analyst, Russell Diabo (who previously authored the detailed expose “Harper Launches Major First Nations Termination Plan“) has published a quick two-page primer that you can download, print and, if you’re so inclined, glue to the doors and windows of your local band office!

Termination means the ending of First Nations pre-existing sovereign status through imposed Indian Act legislation, policy and federal coercion of First Nations into Land Claims and Self Government Final Agreements that convert First Nations into municipalities, their reserves into fee simple lands and extinguishment of their Inherent, Aboriginal and Treaty Rights!

“Replace the Indian Act [and related legislation] with a modern legislative framework which provides for the devolution of full legal and democratic responsibility to aboriginal Canadians for their own affairs within the Constitution, including the Charter of Rights and Freedoms.”

Of course “modern” in Conservative terms means assimilation of First Nations by termination of their collective rights and offloading federal responsibilities onto the First Nations themselves and the provinces. “Aboriginal Canadians” is the term the government of Canada uses to describe First Nations because the Termination goal is to convert “Indian Bands” into ethnic municipalities with fee simple lands under provincial jurisdiction.

The Harper government is implementing a First Nations Termination Plan through two tracks: 1) a “Modern” amended Indian Act; or through 2) Self-Government/Comprehensive Claims Final Agreements. The Termination Plan is based upon the following key tenets using federal laws, policies, funding and law (and if necessary military) enforcement: 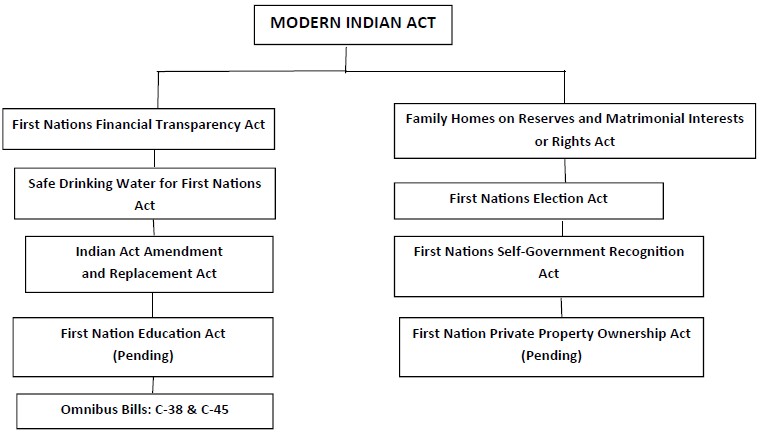