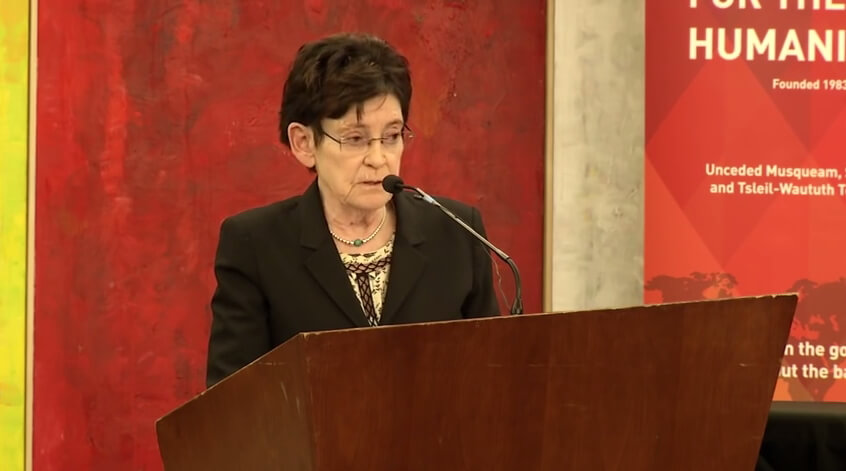 A lecture by Roxanne Dunbar-Ortiz
Support our journalism. Become a Patron!

In this lecture, Roxanne Dunbar-Ortiz, author of “An Indigenous Peoples’ History of the United States,” discusses the reality of former US policy and practice towards Indigenous Peoples not merely as “racist” or “discriminatory” deeds but as precise occurrences of genocide.

Noting that Canadian history holds a similar–albeit less severe–legacy of genocide, Dunbar-Ortiz demonstrates how the United States carried out all five acts of genocide as identified in Article 2 of The Convention on the Prevention and Punishment of the Crime of Genocide (CPPCG).

Razor sharp #truthbombs are sprinkled throughout.

Get Rid of Ads. Support us on Patreon!
“Settler-Colonialism and Genocide Policies in North America”–A free public lecture by Roxanne Dunbar-Ortiz

Governmental policies and actions related to Indigenous peoples, though often termed “racist” or “discriminatory,” are rarely depicted as what they are: classic cases of imperialism and a particular form of colonialism—settler colonialism. As anthropologist Patrick Wolfe has noted: “The question of genocide is never far from discussions of settler colonialism. Land is life—or, at least, land is necessary for life.” The history of North America is a history of settler colonialism. The objective of government authorities was to terminate the existence of Indigenous Peoples as peoples—not as random individuals. This is the very definition of modern genocide. US and Canadian history, as well as inherited Indigenous trauma, cannot be understood without dealing with the genocide committed against Indigenous peoples. From the colonial period through the founding of states and continuing in the 21st century, this has entailed torture, terror, sexual abuse, massacres, systematic military occupations, removals of Indigenous peoples from their ancestral territories, forced removal of Native American children to military-like boarding schools, allotment, and policies of termination.

Roxanne Dunbar-Ortiz grew up in rural Oklahoma, daughter of a tenant farmer and part-Indian mother. Her grandfather, a white settler, farmer, and veterinarian, was a member of the Oklahoma Socialist Party and Industrial Workers of the World. Her historical memoir, “Red Dirt: Growing Up Okie,” tells that story. Moving to San Francisco, California, she graduated in History from San Francisco State University and began graduate school at the University of California at Berkeley, transferring to University of California, Los Angeles to complete her doctorate in History, specializing in Western Hemisphere and Indigenous histories. From 1967 to 1972, she was a full time activist and a leader in the women’s liberation movement that emerged in 1967, organizing in various parts of the U. S., traveling to Europe, Mexico, and Cuba. A second historical memoir, “Outlaw Woman: Memoir of the War Years, 1960-1975,” tells that story. In 1973, Roxanne joined the American Indian Movement (AIM) and the International Indian Treaty Council, beginning a lifelong commitment to international human rights, lobbying for Indigenous rights at the United Nations. Appointed as director of Native American Studies at California State University East Bay, she collaborated in the development of the Department of Ethnic Studies, as well as Women’s Studies, where she taught for 3 decades. Her 1977 book, “The Great Sioux Nation: An Oral History of the Sioux Nation,” was the fundamental document at the first international conference on Indians of the Americas, held at United Nations’ headquarters in Geneva, Switzerland. Two more scholarly books followed: “Roots of Resistance: A History of Land Tenure in New Mexico” and “Indians of the Americas: Human Rights and Self-Determination.” In 1981, Roxanne was invited to visit Sandinista Nicaragua to appraise the land tenure situation of the Mískitu Indians in the isolated northeastern region of the country. In over a hundred trips to Nicaragua and Honduras, she monitored what was called the Contra War. Her book, “Blood on the Border: A Memoir of the Contra War,” was published in 2005. “An Indigenous Peoples’ History of the United States” was published by Beacon Press in September 2014.