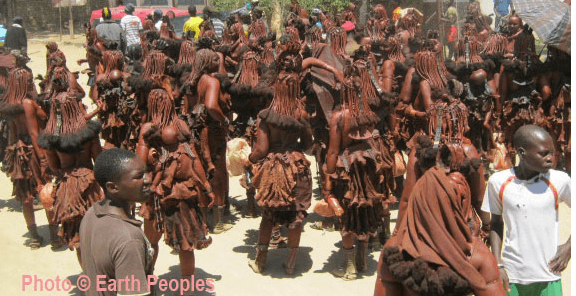 For over a decade, the indigenous Himba Peoples from Namibia have objected to the construction of the Baynes Hydro Power Plant in Orokawe, Namibia. To voice their objections, they’ve written letters to the head of state and other relevant governmental authorities, filed complaint procedures at the United Nation with the help of EARTH PEOPLES reports, and carried out many different protest marches.

Now, the Himba are speaking out against two Namibian businessmen–along with the Namibia government and the Chinese company registered to build the hydro dam–over several bribery attempts that subsequently led to the downfall of former Ovahimba (Himba) Chief Hikuminae Kapika.

Namibia considers Himba Chief Kapika to be the main obstacle to the construction of the Baynes hydro dam, a project they desperately want to get off the ground.

It started sometime in November of last year, when information reached EARTH PEOPLES that two Namibian men, Mervin Hengari and Justice Tjirimuje, were heavily targeting Chief Hikuminae Kapika (Epupa region) to win his support for the construction of the dam along the Kunene River.

Hengari and Tjirimuje are both currently scheduled to go on trial to face charges of corruption in connection to the unrelated Neckartal Dam tender, so it was more than worrisome to learn that these individuals made it their personal mission to bring Chief Kapika on board the Baynes project. Observer24 Journalist Diana Ndimbra takes a look at the effort in her February 2014 article, Graft suspects flirt with chief.

After visiting Kapika on several occasions, the two sinister characters eventually returned to the homestead of Kapika, with a Namibian government delegation and representatives from the Chinese construction company. During that meeting, Chief Kapika reportedly agreed to a proposal that members of the Himba community would travel overseas along with himself “to learn about and to see dams”.

To the dismay of the larger Himba community–who didn’t learn about the trip until after everyone had left–only two Himba from the area that would be directly affected by the dam were selected to go on the supposed tour. The group returned to Namibia in October and stayed nearly three months at a farm owned by one of the two businessmen.

Upon their return, the Himba people held several regional meetings so Chief Kapika and those he traveled with could explain what happened. Chief Kapika never showed up at the meeting.

When rumors spread that Kapika had signed an agreement to build the dam on behalf of the Himba Peoples, his community decided to leave nothing to chance. They denounced Kapika as their voice and traditional chief, feeling that he could not sign a document that did not reflect their position.

Members of the group who traveled with Chief Kapika later informed the community of the two businessmen’s plans. They wanted to make Kapika a gazetted chief. The businessmen also promised to pay each member of the group N$700,000 providing they could convince Kapika to support the dam, a deal that government authorities confirmed in meetings.

What’s more, after Kapika returned to Himba territory, his homestead was suddenly protected by a permanent police contingent. His own people were not even allowed to speak to Kapika without a police officer standing beside him.

Kapika’s home was vacated by the police some days ago, after community anger began to unravel.

At a protest in Epupa earlier today, the Himba people reaffirmed their objection to the construction of the dam, and repeated their demand for human rights including their right to Free, Prior and Informed Consent (FPIC).

They were joined in protest by Himba from the other side of the border, from Angola.

The governments of both countries don’t want to listen to their Indigenous Peoples, the original inhabitants of the very territory where both states want to build the dam.

“Nothing has changed, we strongly oppose the dam and will continue to fight its construction, no bribes and no targeting of our leaders will change that,” the Himba said.

In the past, the Himba offered a valuable suggestion to both states: Instead of blocking the Kunene River to generate power, they could use solar energy. That way, everybody wins. 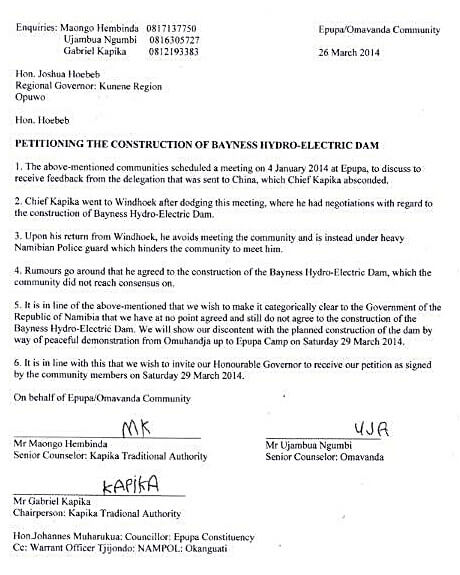 Himba Protest Letter 26 March 2014, explaining that they continue to object to dam construction and their objection to bribery attempts by the government of Namibia with the goal to get Himba Chief Kapika to sign a consent document to the dam.