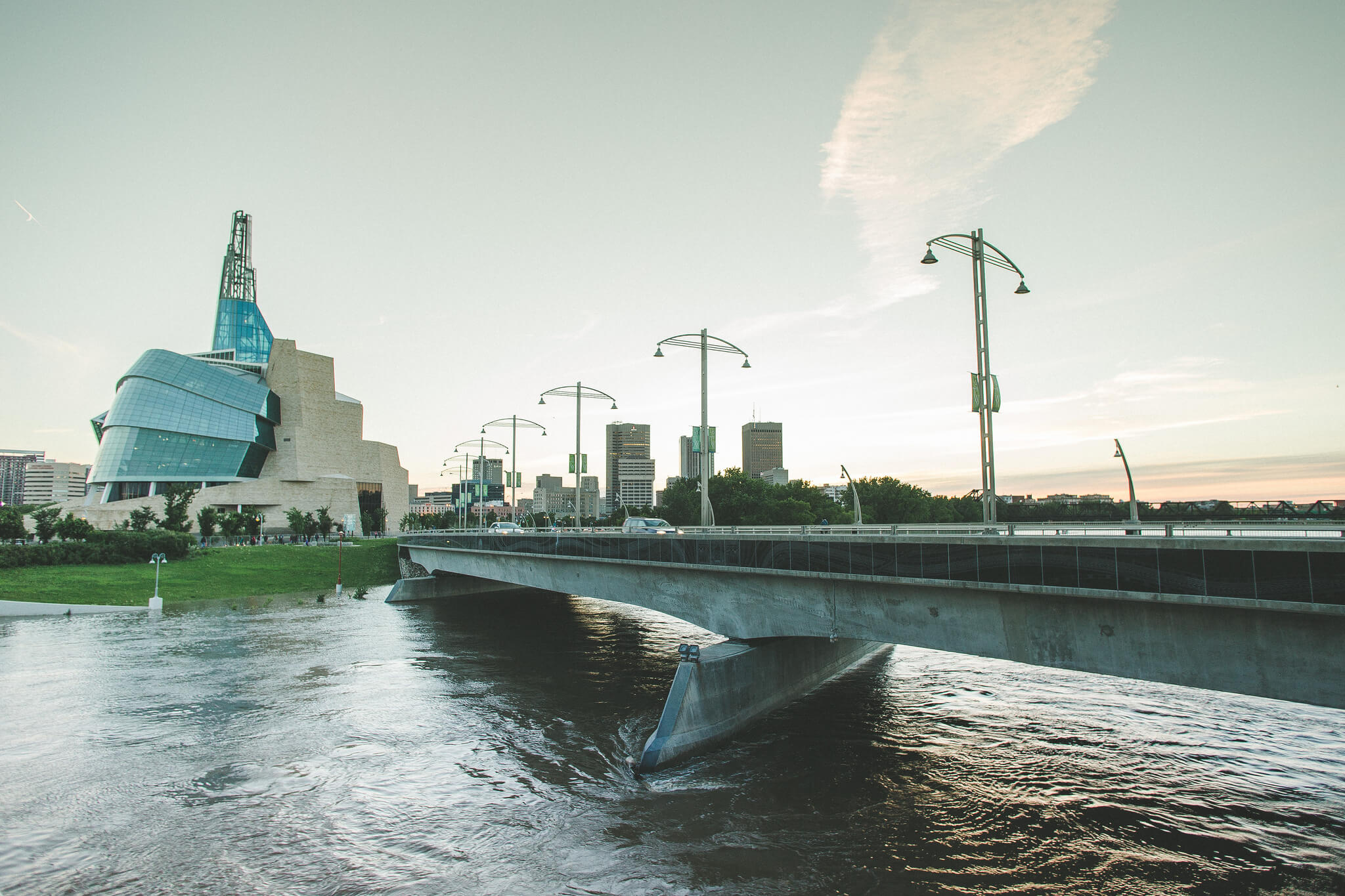 The Canadian Museum for Human Rights is planning its grand opening for the third week in September and garnering some less than stellar press in the process. The most recent controversy surrounds their unprofessional process of selecting a Métis entertainer for their opening. The Museum asked for and then refused Manitoba Métis Federation’s entertainer suggestion based on age. Now MMF is calling for a boycott.

It’s not surprising to me to that the CMHR seems beset by embarrassing controversies and accusations of arrogance and entrenched colonizing behaviour. I also plan to boycott the CHRM although for a different reason.

The construction of that building itself is an act of cultural violence.

All I see when I look at that monstrosity of a building is a headstone and a terrible waste of resources.

A headstone to many nations of Indigenous peoples whose rich and varied cultural heritages are now buried under megatons of concrete and steel.

Described as the most important archeological site uncovered in Manitoba, those at the top of the CMHR were offered an opportunity to be a part of history by preserving the rich heritages of people who populated this land long before European arrival. The CMHR was provided suggestions on how to incorporate the archeologically significant site and build the museum. They refused.

In a December 2011 CBC interview, the archeologist hired by the museum, Sid Kroker, reported that the decision makers at the CHRM ignored heritage permits and recommendations for “heritage resource management practices”. Before suddenly retiring in the middle of the report, the archeologist noted that making future recommendations would be “…as futile as King Canute railing against the tide.”

The CMHR, run by wealthy children of settlers, decided local Indigenous people’s history and heritage does not deserve the same respect they demand for their own ancestors and history.

It’s a decision rooted in cultural superiority, arrogance and privilege. So I’m not surprised that the CMHR has continued on their entitled myopic path in making subsequent decisions.

The CMHR sits on land containing millions of artifacts of at least eight Indigenous occupations spanning a thousand years, and maybe more. The museum claims to have done the largest dig ever at the Forks site. While this may be true only 3% of the site was examined. The fact that this was the Forks’ largest dig reflects the success of strong pressure by local Indigenous peoples and archeologists to have the site examined vs. the low priority given to Indigenous archeology by euro-descendant decision makers. It is not a sudden awakening of respect for Indigenous cultures by CMHR or the Province of Manitoba.

The 3% of the site they did uncover was done hastily and on the cheap, only hiring three people, opposed to the 15 recommended by their own archeologist.

Sacred items such as pipes, tools, animal parts were unearthed; evidence of treaty making; a footprint dating back 800 years; evidence of remarkable plant knowledge… and 97% of this now buried. Much of the site destroyed by the construction of the CMHR. The artifacts already uncovered now sitting unmarked in bags in some government basement. It is clear that accessing and preserving these ancient pieces of history is not a priority.

In media reports, CMHR spokesperson, Angela Cassie, claims “no human evidence” was uncovered as a defense against the need for further site examination. This statement may be correct since only 3% of the site was examined, and examined in a very cursory manner. The CMHR cannot claim that human remains do not exist in the other 97% of the site. And the fact that human remains weren’t found doesn’t lessen the historical importance of the site.

Everything uncovered was a surprise to one of Manitoba’s most acclaimed archeologists. In speaking with retired, Dr. Leigh Syms, a nationally renowned and respected archeologist with more than 40 years experience working with Manitoba’s ancient heritage, he had this to say about the excavations,

“…it was a pathetically inadequate sample and it’s certainly in no way representative of what’s there. And there’s great, great gaps in the knowledge that we will never have in terms of First Nations at the Forks.

“…those 8 occupations are a phenomenally new record on what we think are ancient Anishinabe on the Red River. And the overall site at the Forks, with its 6000 years, has many different cultures that were represented there…now it all lies buried.”

Discoveries at the Forks contributed a new understanding to the field of archeology. For example, traditional archeology believed ancient paints to be rudimentarily made with basic materials. Modern analysis tools used on a paint stone found under the CHRM, revealed that along with fish oils as they thought, there were also a number of plants used to make paints, showing a sophisticated knowledge of plants.

“…we have this whole new range, ideas and appreciation of plant use…you can’t get it unless you have the physical evidence. And obviously if you only have 3% you’re not anywhere near close to getting a representative sample.”

For me all that pile of concrete, steel and glass represents is an attempt to literally stamp out evidence of generations of Indigenous nationhood. Evidence which supports oral stories of self-governing nations gathering to forge agreements on how to live and trade together. Evidence of rich biological and agricultural knowledge systems in place before European arrival.

When I see the CMHR, I think of the hundreds of millions of public monies and the efforts of wealthy families to acquire public donations to build their pet project, juxtaposed against children in need of affordable housing, mental health services, real food, addiction programs and cultural supports.

Construction costs of the CMHR total more than 350 million, with more than 170 million coming from taxpayers. Canadian taxpayers have already been paying millions in operating fees for museum staff for the past four years even though the museum hasn’t been open. The opening itself delayed due to the self-indulgent building design that required multiple rewrites. Taxpayers are also on the hook for the estimated 21.7 million annual operating fees while at the same time funding for affordable housing, women shelters, youth programs, counseling services, health, and education are slashed.

Studies and real life examples show that when first nation children are taught and supported in their cultural ways, they thrive. Yet successful programs proven to turn lives around are chronically underfunded if they exist at all.

So I will not be joining in the celebratory events of the CMHR and I do not plan to ever enter that bastion of Eurocentric dominion.

The ancient occupations are not limited to the land underneath the CMHR. Ancient occupations and artifacts extend along the Red River underneath Sam Katz’s ball park and another piece of land, Parcel 4, that is scheduled for development within the next few years. The artifacts found under the Human Rights Museum increase in complexity and depth as you move inland from the river. So with “Parcel 4” there’s still a chance to uncover ancient history and heritages and learn more about the land we live on.

Stuart Murray has touted the educational opportunity that the museum offers and Gail Asper will be receiving an award for her education work. If only the wealthy cared as much about brown peoples’ lives and heritages.

* requests for interviews with Angela Cassie from CMHR and the Manitoba Historic Resources Branch were not returned.

Kimlee Wong, a mother of three, is a master’s student at the University of Manitoba and holds a honours degree in biology. She is a member of Sagkeeng First Nation and has done investigative stories for the Aboriginal Peoples Television Network and worked on social justice issues in southeast Asia and at the United Nations.