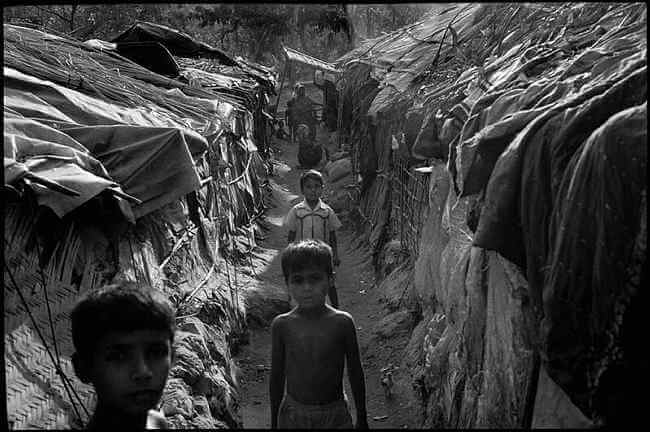 Rohingyas: No one should have to live like this

Your nose is constantly assaulted by the foul smells of the mud at low tide, latrines, and various other waste that comes from people living in such crowded, unhygienic conditions. When you enter a two by three metre shelter and ask how many people sleep there, it seems impossible that a family of five has the space to live. People survive in these conditions every day with no privacy, no peace and no dignity. (Jane, MSF nurse, Teknaf)

The MSF recently completed a Report on the Rohingyas who have been living in make-shift camps as stateless immigrants in Bangladesh. For years the Rohingyas have been fleeing from Burma to escape continuous abuse and violence from the Burmese Government. The Rohingyas find themselves needing permission to travel outside of their villages, their land is confiscated, their mosques are destroyed, they are arbitrarily arrested, and they are subjected to forced labor.

Background
The Arakan State of Burma is today inhabited by several culturally distinct Peoples–among them are the Rakhine Buddhists, recognized as a national race by the Burmese military government and form the majority along the Coast of Arakan. Another culturally distinct People, The Rohingya Muslims, also live in Arakan–and have since perhaps the 7th century (but maybe the 12th century ).

Both Peoples had always pretty well coexisted peacefully, but during the second world war that changed. In 1948 Burma became an independent state, and the Rohingyas held a rebellion in an unsuccessful attempt to make Arakan it’s own State, independent of Burma. This initiated several conflicts between these two Peoples, and Burma responded ‘in kind.’

Initially, all Rohingyas were removed from civil posts.Their movements were restricted and their property confiscated. In 1962, under the military regime of General Ne Win, the Muslims were labeled illegal immigrants who settled during British rule and the government began taking steps to drive them out of Burma. In 1974, their Nationality was completely removed, making them foreigners in their own country.

Following the takeover by the military in 1988, the Rohingya became subjects of continuous discrimination. Even now, numbering approx 1.4 million, they are arbitrarily arrested, “they need authorization to travel outside of their villages, their land is confiscated by the government for use by Buddhist settlers, their mosques are destroyed by the military and they are routinely subjected to forced labor.” (source)

From www.msf.org – In 1991/1992 approximately 260,000 Rohingya refugees from Northern Rakhine State (NRS) in Myanmar fled their country due to ongoing gross human rights violations and violence, in order to reach Bangladesh {…}

They settled in 20 camps in the Cox’s Bazar area and the Government of Bangladesh (GoB), the United Nations High Commission for Refugees (UNHCR) and other international organisations (including MSF) began to provide emergency relief. Although the situation in Myanmar had not significantly improved since 1991, mass repatriation started at the beginning of 1994. There are now only two official UNHCR camps hosting the
refugees which arrived in the early 1990s: Nayapara (16,010 residents) and Kutupalong (10,144 residents). Despite the fact that people in Myanmar are still facing abuses, since August 1994 Rohingyas arriving in Bangladesh have not been officially considered refugees. Most of them live scattered among the population of the Cox’s Bazar district and in Bandarban district (Chittagong Hill Tracts), together with many that escaped
repatriation.

In November 2002, in an attempt to curb criminality and restore order in the country, the military-led “Operation Clean Heart” was carried out countrywide by the Government of Bangladesh. In the Teknaf area this led to many (semi) integrated Rohingyas being expelled from their homes and losing their livelihoods. As a result of this operation a group of approximately 4,500 people ended up in a makeshift camp on a piece of privately owned land in Teknaf town. This was the first “Tal Camp”.

Rohingyas in Bangladesh: Unwanted and homeless on a small stretch of marshland
Forgotten People: The Rohingyas of Burma