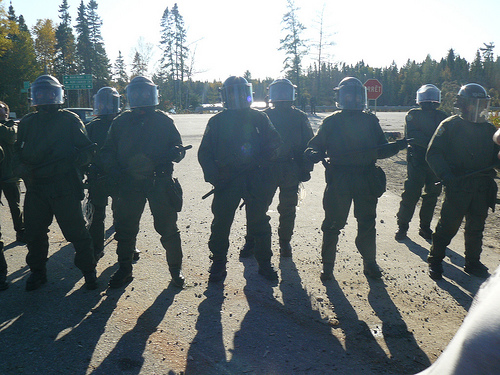 Monday morning, families from the Algonquin community of Barriere Lake set up a blockade on highway 117 in northern Quebec to demand that the Federal and Quebec governments uphold the agreements they signed with the community, and for Canada to appoint an observer to witness a leadership reselection in the community, and then respects its outcome.

Half way through the day, the Sûreté du Québec’s anti-riot squad was called in to break up the blockade. They were said to overrun the families, launching tear gas, one of of which hit a child in the chest. Nine
people, including an elder, a pregnant woman, and two minors, were arrested.

Here’s an urgent call for support that the Barriere Lake Solidarity Collective sent out before the arrests. The blockade is over now, but it’s not to late to speak up in support of the Algonguins. Updates and further information can be found at their website, barrierelakesolidarity.blogspot.com

Starting at 6am this morning, families from the Algonquin community of Barriere Lake have blockaded highway 117 in northern Quebec. They are demanding that the Federal and Quebec governments uphold the agreements they signed with the community, and stop imposing illegitimate leadership on the community in order to avoid their responsibilities.

As of 12:30pm on Monday, the police are saying that the Montreal police have been called in to clear the highway, and arrest those who resist. There are currently 50 community members and 20 non-native supporters peacefully blockading the highway. The community needs members of the broader public to make it clear right now that this is unacceptable, that they have suffered enough division at the hands of the government, and that the agreements need to be honoured.

What you can do right now to help

We need people to let the government know that they support the demands Barriere Lake has been fighting for for decades.

Please take 15 minutes to phone or fax a letter to some of the following:

Use some of the following points (along with your own):