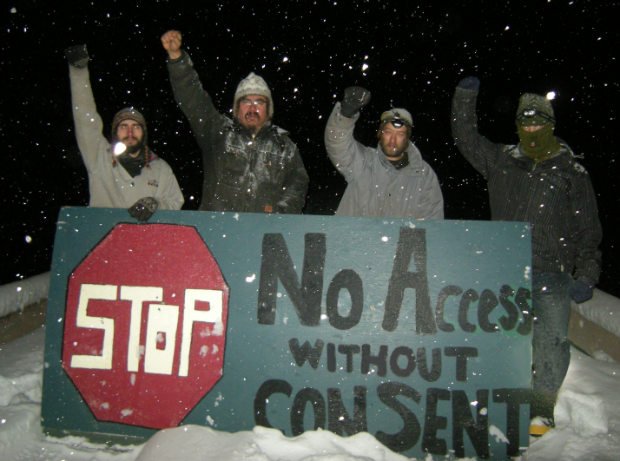 Raising Resistance: Solidarity with the Unist’ot’en. Call for actions on Tuesday November 27th
Support our journalism. Become a Patron!

In inspiring resistance this past week, the Unist’ot’en and Grassroots Wet’suwet’en have, yet again, evicted pipelines from their territories!

On November 20th, Wet’suwet’en Hereditary Chief Toghestiy intercepted and issued an eagle feather to surveyors from the Can-Am Geomatics company who were working for Apache’s proposed natural gas Pacific Trails Pipeline (PTP). In Wet’suwet’en law, an eagle feather is used as a first and only notice of trespass. The surveyors were ordered to leave the territory and the road leading into the territory has been closed to all industry activities until further notice. The materials that were left behind by the work crew are being held until Apache and PTP agree to open up appropriate lines of communication with the Unist’ot’en and grassroots Wet’suwet’en according to the Free Prior and Informed Consent protocol and laws of their unceded territories. The Unist’ot’en are against all pipelines slated to cross through their territories, which include Enbridge Northern Gateway, Kinder Morgans northern proposal, Pembina, and Spectra.

The Unis’tot’en are now calling for solidarity and support actions to reaffirm their position and to amplify the message to Industry and Government that no proposed pipelines will proceed in their territories. There is a call for immediate actions on Tuesday November 27th to ensure that corporations, investors, and governments get a clear message that they have no right or jurisdiction to approve development on Unist’ot’en lands.

Here is how you can get involved for Tues Nov 27:

If you can organize an action, please let the Unist’ot’en Camp know by Sunday November 25th so that they can list it (or do a surprise action!). If you do want to coordinate, please email Harsha at harsha at resist.ca, Toghestiy at toghestiy at gmail.com, and Julien at sesame at riseup.net.

The Unist’ot’en community’s website, including news releases and videos from latest events:
http://unistotencamp.wordpress.com

A short video explaining the community’s struggle can be found at:
http://stoptheflows.tumblr.com/

What is Pacific Trails Pipeline?

Of the many proposed pipeline projects that would cross through Unist’ot’en land, Pacific Trails Pipeline (PTP) is the first one slated to begin construction and poses and immediate threat. PTP is a $1 billion partnership between Apache Canada, Encana Corporation, and EOG Resources (Enron Oil and Gas). The 463-kilometer pipeline would connect a liquified natural gas terminal in Kitimat to Summit Lake near Prince George in northeastern BC, with the aim of transporting upto 1 million cubic feet of natural gas per day, extracted through hydraulic fracturing of shale gas (fracking), to international markets through supertankers. The BC government approved the pipeline’s expanded capacity in April 2012.

What is Wrong with Fracking?

While industry sells fracking as a “green transition fuel,” ecologist specialist Robert Howarth from Cornell University, says it clearly: “Shale gas is worse than conventional gas, and is, in fact, worse than coal and worse than oil.” A number of doctors, including the chief medical officer at the U.S. National Center for Environmental Health and the New Brunswick College of Family Physicians, have called for a moratorium on fracking. A number of jurisdictions, including France, Quebec, and New York, currently have moratoriums on fracking. Last year, three Kainai women from the Blood Tribe in southern Alberta were arrested for preventing a column of trucks from leaving a Murphy Oil well site and vowing not to move until fracking plans were stopped.

What are the Unist’ot’en saying?
The Unist’ot’en clan of the Wet’suwet’en Nation has been vocal about their opposition to PTP. Clan members have built a log cabin and protection camp in its path. Most recently, on November 20th, 2012, Wet’suwet’en Chief Toghestiy intercepted and issued an eagle feather to surveyors. In Wet’suwet’en law, an eagle feather is used as a first and only notice of trespass. The surveyors and all other people associated with PTP were ordered to leave the territory and told that they are not ever allowed to return to Unist’ot’en land. The road has now been closed to all industry activities until further notice. On August 23rd, 2010, Toghestiy and Hagwilakw of the Likhts’amisyu clan gave Enbridge representatives trespass warnings during a Smithers Town Council meeting where Enbridge attended to attempt to smooth over their recent oil spill on the Kalamazoo River. In November 2011, setting up a road blockade with “Road Closed to Pacific Trails Pipeline Drillers” signs, the Unist’ot’en and the Likhts’amisyu of the Wet’suwet’en escorted out PTP drillers and their equipment.

Freda Huson, spokeswoman for the Unist’ot’en Clan, states: “Pacific Trails Pipeline does not have permission to be on our territory. It’s unceded land. We said ‘NO!’ in their meetings. We’ve written them letters; I’ve sent them emails, saying ‘absolutely NO!’ to their projects. Pacific Trail Pipeline’s proposed route is through two main salmon spawning channels which provide our staple food supply. We have made the message clear to Enbridge and Pacific Trails and all of industry: We will not permit any pipelines through our territory.”

Likhts’amisyu hereditary chief Toghestiy similarly states, “Unist’ot’en and Grassroots Wet’suwet’en have consistently stated that they will not allow such a pipeline to pass through their territory.”

The Wet’suwet’en are made up of five Clans, with territories that they are expected to manage for their future generations. Neither the Unist’ot’en People or the other Grassroots Wet’suwet’en are associated with the Office of the Wet’suwet’en. The Unist’ot’en clan is against all pipelines slated to cross through their territories, which include Enbridge Northern Gateway, Kinder Morgans northern proposal, Pacific Trails, Pembina, Spectra, and others. Enbridge pipeline would be built side by side to, with essentially the same right of way as, Pacific Trails, thus raising concerns that this pipeline might ‘blaze a trail’ for the Enbridge project.

What is the Carbon Corridor?

Pacific Trails Pipeline, along with Enbridge pipeline and Kinder Morgan Trans Mountain pipeline expansion, are part of a larger energy strategy. Like Alberta, the British Columbia government aims to be an ‘energy power house’ by exploiting some of the largest shale gas deposits in North America and using pipelines to place fracked shale gas on the more lucrative international market. According to the Canadian Center for Policy Alternatives, much of the shale gas produced in BC is currently destined for Alberta, where it is used as fuel in the tar sands. All this is happening as Keystone XL pipeline to the U.S. Gulf Coast and Enbridge’s proposed reversal of the Line 9 pipeline to open up Ontario, Quebec and U.S. markets are also putting short term corporate-driven capitalist interests and resource-extractive colonial developments ahead of Indigenous self-determination and stewardship, destroying and exploiting the land and ecosystems, and disregarding the safety and health of communities including those who have to work the poisonous jobs in these industries.