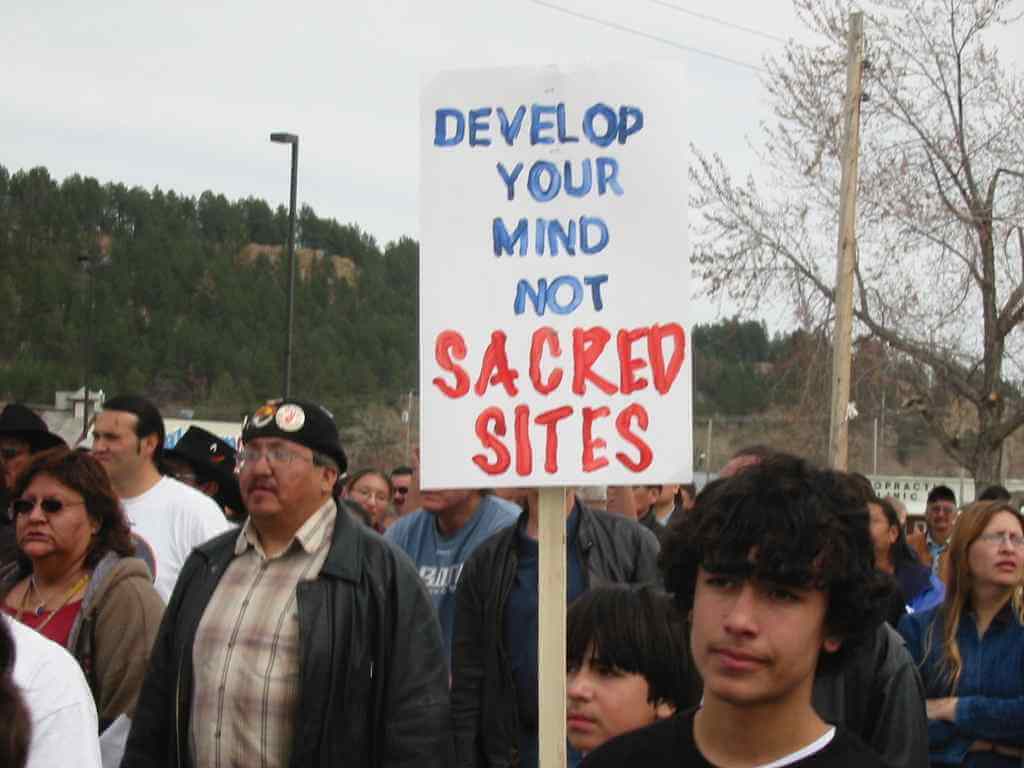 Following is an article by a member of the Cheyenne Nation, who discusses the effort to Protect Noavose (or Nowah’wus. Mato Paha to the Lakota)

First, some background: In early March, bulldozers broke ground for “Sturgis County Line,” a massive new biker bar and concert venue to be located on 600 acres at the base of Bear Butte. Bear Butte (on the outskirts of the Black Hills, near Sturgis, SD) is a sacred place of prayer for over thirty Native Nations across the Great Plains, as well as a state park and a national historic landmark. Each year thousands of Native people travel to pray at Bear Butte.

Arizona entrepreneur Jay Allen originally planned to name his venue “Sacred Grounds” and to erect an 80-foot statue of a Native person outside the bar. He boasted in March 2006 on his web site that the re-named Sturgis County Line will provide “hundreds of acres to party… in a safe haven, free from a policed environment, that’s what I’m talking about! … over 150,000 s.f. of asphalt for semi-tractor trailors… 22,500 s.f. of… ice cold beer… kick-butt music & oh yea, hot hot women!”[1] The 600-acre complex will include an outdoor amphitheater with space for 30,000 people, where “the largest music acts known to mankind” will perform less than a mile from the base of Bear Butte. (source)

From the Indian Country Article – ”Noavose is the birthplace of our nation, the fundamental foundation of cultural identity,” said Northern Cheyenne President Eugene Little Coyote. ”The problem is that the biker rally business is expanding on the footsteps of our sacred mountain and this is disrupting the most sacred time, when our people make annual pilgrimages to participate in fasting, piercing and other ceremonies.” Little Coyote said that protesting the entire Sturgis Bike Rally is not a reasonable solution.

Northern Cheyenne tribal councilman Alberta Fisher, along with councilman Jace Killsback, the tribe’s Land Authority chairman, purchased a 160-acre campground at the base of Noavose in 2004. The Land Authority constructed camping structures, shades and outhouses for use by tribal members during ceremonies. There are plans to install plumbing and fire pits on the land. Last year, Fisher and Killsback led in the purchase of a 36-acre tract and a house directly south of Noavose. These purchases added nearly 700 acres to the Northern and Southern Cheyenne tribes’ holdings at Noavose, maintained together in trust for nearly 40 years.

Northern Cheyenne Tribal Historic Preservation Officer Conrad Fisher provided recommendations. ”The spiritual and cultural significance of the mountain to the Cheyenne is the most documented in both written and oral forms,” he said. ”Through archaeological surveys we can identify certain sites and medicinal plants without disrupting or destroying these areas, which will be beneficial in protecting Noavose.”

Dion Killsback, Northern Cheyenne tribal attorney, filed a motion to appear in South Dakota Supreme Court that would allow the tribe to submit an amicus brief challenging the Meade County Board of Commissioner’s approval of a liquor license for a biker bar near Noavose. The Native American Rights Fund, the National Congress of American Indians and the University of North Dakota Indian Law Clinic have submitted similar motions to appear. If the motion to appear is granted, the tribe will be able to demonstrate and distinguish the uniqueness of Noavose to the Cheyenne which could affect the outcome of the South Dakota Supreme Court’s decision.

Ben Nighthorse Campbell, former senator of Colorado and Northern Cheyenne member, was also present at the summit and discussed the government-to-government diplomatic strategies to protect Noavose.

”The legislative approach may be an option that the tribes may want to consider,” Campbell said. ”I can remember the plans from the Cheyenne and Lakota to change the name of the ‘Custer Battlefield’ to the ‘Little Bighorn Battlefield’; when the United Cheyenne wanted to acquire land from the Sand Creek Massacre site; when leaders planned to repatriate human remains from the Smithsonian. All of these plans required strategic diplomacy and leadership. Eventually all of these goals were reached when they were presented and passed as legislation on the floor of the U.S. Senate.”

Campbell also offered other strategies: finding allies in the Sierra Club, the Audubon Society, the Environmental Coalition and faith-based groups who have shared goals.

Another concern was the public opinion among American Indians in the South Dakota area. ”The activist groups that made headlines in their efforts to protect Noavose were valiant,” Killsback said. ”But these groups may have also negatively portrayed Indians as too radical for diplomacy. We commend them, but also hope that these groups will cooperate with Indian nations. … A coalition of federally recognized Indian nations will have more political pull.”

Noavose was threatened by development for the first time in 1968. In 1971, Northern and Southern ceremonial leaders and the Council of Forty-Four met to undertake initiatives to protect it. Tribal historian Joe Little Coyote recalled, ”There was no support from the IRA tribal governments then, but today I am glad to see the two tribal governments have come forward to strategize and plan.”

Leaders from both tribal governments agreed that engaging state and local community members will be beneficial to their efforts. The United Cheyenne Nation is also seeking the protection of Noavose as a human rights issue on an international level.

Leo Killsback is a member of the Northern Cheyenne Nation and is a Ph.D. candidate at the University of Arizona American Indian Studies program. E-mail him at leokills@email.arizona.edu .