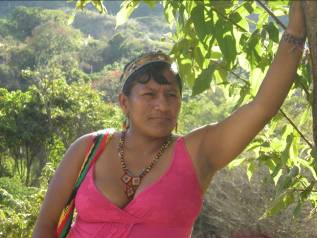 A paramilitary group calling itself RATROJOS has threatened several individuals and social organizations in south west Colombia for having, the group says, “a subversive discourse for the rights and ideologies of the narco-terrorists of FARC and ELN.”

Among those named by the group, is Aida Quilcue, former leader of the Cauca Regional Indigenous Council (CRIC) and spokesperson for the Minga of Social and Communitarian Resistance. The CRIC was also named by RATROJOS, along with the Pradera indigenous reserve, a law firm and the UN Development Programme in Narino.

One month before the death threat was issued by RATROJOS, in late October, Colombia’s Vice President hinted at an alliance between human rights groups and right-wing paramilitaries on live television.

Around the time of the interview, another paramilitary group called “the Black Eagles” issued their own threats against several other individuals and organizations. Several murders have taken place since this threat was issued.

Below, an alert from the Colombia Solidarity Campaign followed by a list of contacts

Paramilitaries have again threatened social organisations across the southwest region of Colombia, as paramilitary violence and threats continue to intensify in the Andean country. Indigenous leader Aida Quilcué was amongst those threatened, a month after she returned from a trip to the UK at the invite of Unison Northern and the Northern TUC, in conjunction with the Colombia Solidarity Campaign.

The threat is signed by the ‘Grupo Armado Los Ratrojos – Comandos Urbanos’, a new generation paramilitary militia based in Nariño department, and dated November 2009. It names Aida and several other social organisations and individuals which operate in the South West region of Colombia.

Aida is ex-leader of the Cauca Regional Indigenous Council (CRIC), spokesperson for the Minga of Social and Communitarian Resistance, and currently a pre-candidate for next March’s Senate elections. Her husband Edwin was murdered by the Colombian army in December 2008 in an attack seemingly meant for Aida herself.

During October, on two occasions Aida was regularly followed by strange cars and individuals. On one occasion two men who were following Aida were apprehended by indigenous guards, who found that the men were armed and weren’t carrying any identification, a criminal offence in Colombia. On another occasion, four men in a car were seen monitoring Aida’s house. The car’s registration plate was recorded, but when the details were taken to the police to ask them to run a check on the vehicle, the reply was that this registration doesn’t exist.

The threat states that all have been declared as military objectives ‘after a long and extensive intelligence process’, and accuses all of the organisations and individuals of being guerrillas. It comes after a shower of threats and violence against social organisations in the region over the past month.

In Cerro Tijeras indigenous reserve, Cauca department, three community members have been murdered in the past three weeks, and another seriously injured (See Urgent Action 20 November 2009). During her trip to the UK Aida expressed concern for her safety upon returning to Colombia, but said that she had to go back “because she dreams that Colombia can one day be different, a country with social justice and peace, and without arms”.

Please help to protect the social organisations and individuals being threatened in Colombia by expressing your concerns to the Colombian government.

Please copy your emails to info@colombiasolidarity.org.uk