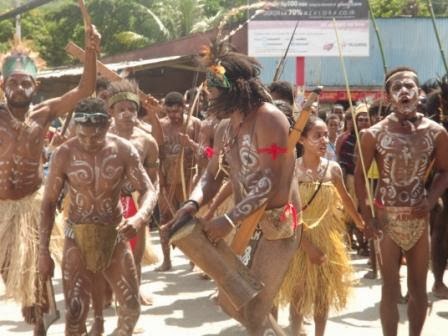 Papuan cultural parade blockaded then broken up by Jayapura Police

The demonstration of culture, music, art and dance from across Papua’s indigenous tribes, in which several hundred students in two groups marched wearing traditional Papuan dress, was to highlight the demand of “Save the Papuan Culture”. The manifestation was organized by the Youth Coalition for the Rise of Students (Koalisi Pemuda mahasiswa bangkit or KPMB) and the Cenderawasih University’s (Uncen) Student Executive Body (Badan Eksekutif Mahasiswa or BEM).

Speakers, songs and dances were performed from 8-10am local time in two locations, outside the Uncen Waena Housing Complex (Perumnas III) and in front of the post office in the town of Abepura, and at 10am, the Perumnas III mass began to march and dance their way to Abepura.

However Police blockaded the mass action once the crowd reached the Waena traffic lights. Despite having previously notified police of their intention to hold the parade, field coordinators of the action were forced to negotiate with the police, pointing to the KPMB’s intention to hold a peaceful action that day in the form of Papuan cultural art.

However, in an outburst witnessed by a West Papua Media stringer, the Deputy Commander of the Jayapura District Police, the notorious hardliner Kiki Kurnia refused to let the gathering continue, warning the crowd that he would not tolerate “introducing some culture from an unknown place”. “There is no such culture such as that in Indonesia,” Kurnia asserted, dismissing over 45,000 years of Papuan language, culture and art.

Kurnia then prohibited the students from displaying any form of Papuan culture, and further stated that the crowd “was prohibited from carrying out any action of any form whatsoever as the Governor had prohibited all forms of actions,”. according to independent sources and verified by WPM. Just after 10am local time, ordered several platoons of heavily armed police to blockade and disperse the cultural gathering. Several injuries were reported but unconfirmed.

After being forcefully dispersed, a much larger mass returned and gathered in front of UNCEN’s main entrance, lighting a bonfire on the road in response. According to witnesses, this crowd was spread out as far as Perumnas III in Waena, a distance of several kilometres.

According to the cultural event organisers, the crowd outside UNCEN was angrily voicing their objections to the continued silencing of the democratic space throughout all of Papua by the Police, with speakers expressing outrage at the betrayal of the culture of Papua.

“That the police had been obstructing the mass action stating ‘Where are you bringing this culture from? We don’t have any culture like that in Indonesia’ angered us all, as it is seen as a denial of the Papuan culture,” an organiser told West Papua National Committee (KNPB) media workers.

Members of the gathering clearly spoke out that if the police continued to betray and deny Papuan culture in such a way, that Papuans would mount an even larger scale action asserting the Papuan culture, and that they would boycott the 2014 presidential election, according to reports from the KNPB. The action Coordinator Beny Wetipo then called upon the Papuan community and all parties to save the Papuan culture from being replaced by a foreign culture that was threatening the existence of the Papuan race.