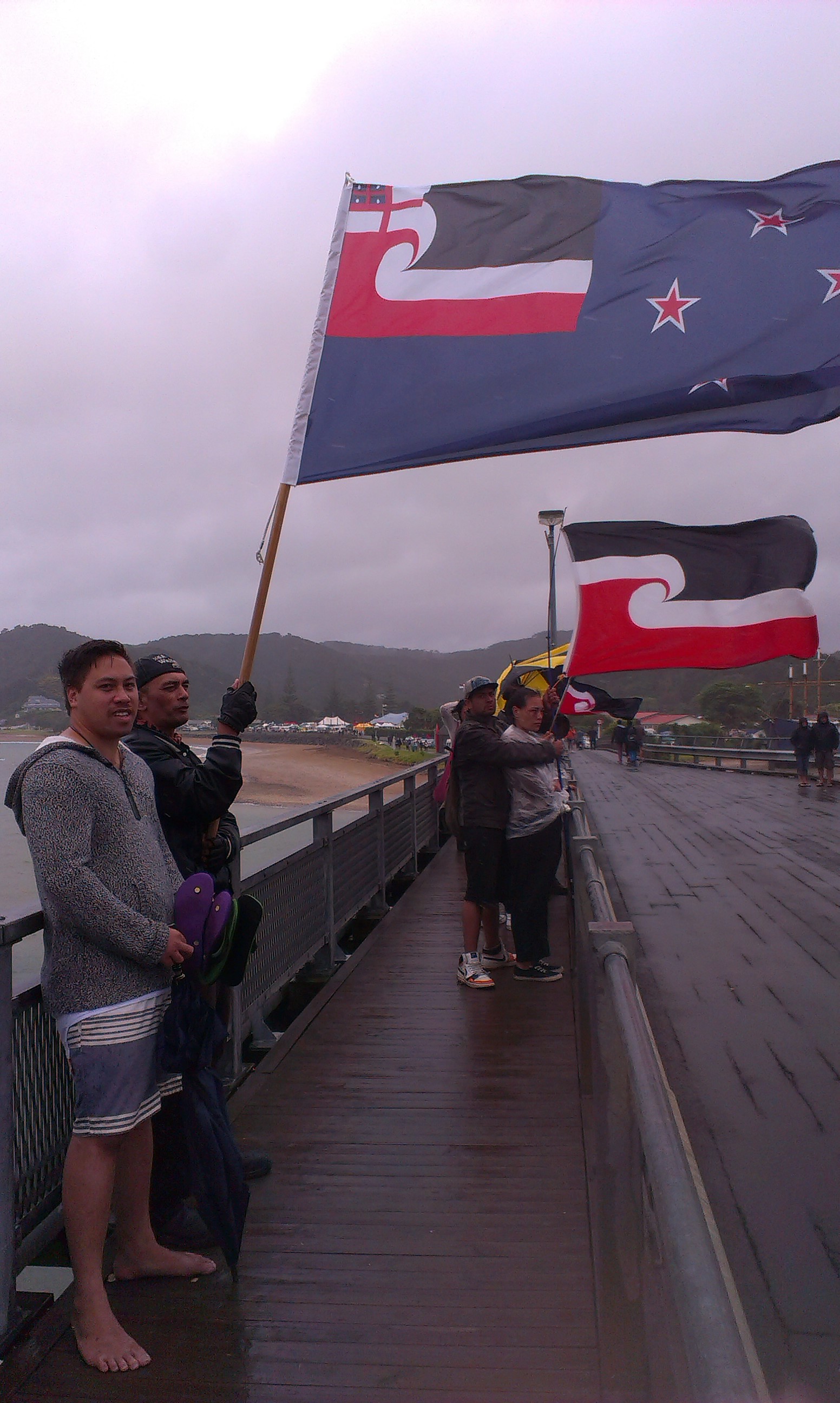 Maori fly flags on the bridge to Waitangi
Support our journalism. Become a Patron!

Two days ago my wife and I took the existential indigenous pilgrimage up to the Treaty grounds for the dawn service. The weather wasn’t flash but the atmosphere buzzed with a spirit of pride. I must say that I really enjoyed this year’s Waitangi Day, it had a real sense of an adolescent nation (New Zealand is quite a young country) on the edge of an awakened identity. I was really proud to see and feel the pride of Ngāpuhi on display, it made me proud to be Māori and it made me proud to be a New Zealander. Hone Harawira’s speech at the dawn service really put Prime Minister John Key’s political correctness into perspective, and it was another incarnation of Hone’s tenacious love for social justice and Māori indigenous rights. A young girl concluded the service with a passionate prayer for socio-political and economic empowerment for Māori in the far north. It was as a snippet of reality thrown into all the political jargon that outlined the ceremony’s beginning, and I hope that the politicians were actually listening, for if we as a nation cannot listen empathetically with indigenous realities on Waitangi Day, how can we paint ourselves as a treaty-honouring country throughout the rest of the year?

In light of the progressive spirit starting to churn in New Zealand’s social spirit, mainstream media still negates the status and credibility of Māori. Fairfax, TVNZ and Mediaworks continue to assert the dominant narratives that shape the kiwi psyche on Māoridom, which for the most part are all negative. By disregarding protests this year as well as focusing on financial settlements, the media have continued their allegiance to the story of neo-colonialism. Indeed, the tradition of protesting for indigenous rights, challenges the status quo assumption that the “Treaty forged ‘one people’ and that New Zealand was a special experiment in relationships between Europeans and an indigenous people” (Orange, 2011, p. 14). If I could describe New Zealand’s mainstream media in one word it would be ‘tool’–a tool that continues to carve an image of Māori as the unpleasant ‘baggage’ that comes with colonizing a country. Whether it is the image of a radical anarchist or a dole bludger (or even the ‘treaty gravy train’ imagery), New Zealand’s neo-colonial media continue to fuel neo-colonial stereotypes. Evidently the status and meaning behind indigenous culture within mainstream media isn’t affirmed positively nor is the messenger ever critiqued on a comprehensive level.

It would be great to think that as a Nation, we could honestly treat Waitangi Day as an authentic account of our indigenous history, present and future. As the on-goings of the 1840 Waitangi day drew to a close, Hobson infamously coined the phrase that would become synonymous with national ‘unity’ – ‘he iwi tahi tātou’ (we are now one people). In hindsight Hobson’s words, transparently token, cannot be paraded or defended as both the ‘good intentions’ of colonization nor an example of present day cultural ‘appreciation’. True unity will arise when the socio-historical barriers that impede biculturalism are broken down; then and only then can we meaningfully start the journey of giving multiculturalism more than the political jargon that it currently incarnates. Then and only then can we as a Nation say that we are one people – united diversely and diversely unified under the recognition of the original Treaty partnership. People forget that 1840 wasn’t that long ago, and the political ramifications of the 1840s-1880s era still reverberates socio-economic and cultural shackles upon our indigenous population. The oppressive ‘Native Land Act’ in 1862 laid the foundations for the termination of ‘communal ownership’. The individualization of land titles was the Crown’s intention in order for further settler advancement – or to paraphrase Colonel Russell, ‘mastering the country’. Some people just don’t realize that Māori can’t ‘just get over it’, that you can’t remedy nearly 200 years of colonization in one 40 year bracket. For some people, like Gareth Morgan, the treaty will cease to have any power once all treaty settlements are finalized. Personally, I hold the view that Te Tiriti o Waitangi is a living breathing covenant, and just like a marriage covenant you don’t end once you reach your 20th anniversary. For most Māori the treaty will never cease to have meaning; hopefully that same respect will become a New Zealand social norm.

Hate it or love it, Te Tiriti o Waitangi is New Zealand’s founding document, and it will never stop holding importance. What was meant to be a three-day Hui ended up being a rushed consultancy on Feb 5th 1840 (blamed on ‘food shortage’), in which the following day the 500-or-so gathered ‘chiefs’ were beckoned to sign on the encouraged assumption that it was in their best interests. Vested with confusion and conflict, the Treaty is just as controversial now as it was in the 19th century. Indeed, every year on the 6th February kiwis celebrate, protest or just get drunk on a day that will always define New Zealand historically as well as politically. We are a young country, still going through the adolescent steps of ‘finding our identity’ as a Nation. Teaching a progressive account of New Zealand history as well as the philosophical paradigm of ‘worldviews’ in schools, would benefit our country’s already budding progression towards perspectives other than mainstream Western culture. Over the past 174 years, Māori have just wanted to be Maori, which is how I see Tino Rangatiratanga being honoured through Te Tiriti–the right of self-determination. The Kawanatanga needs to understand that the ‘challenge’ will remain until genuine ‘co-operation’ is honoured. For most Māori, Te Tiriti will never disappear nor will its imbedded significance for New Zealand’s future.