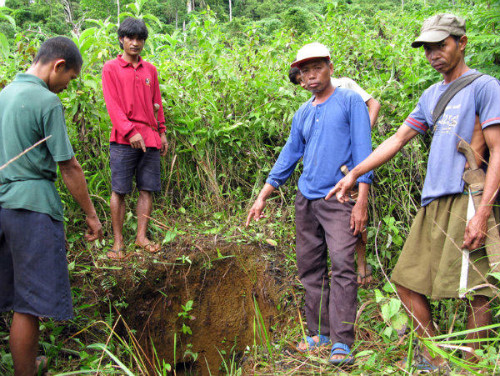 Nearly two months ago, 600 farmers and Indigenous people came together in Puerto Princesa on Palawan Island to urge the Provincial government not to endorse the proposed mining plans of MacroAsia and Ipilan Nickel Corporation (INC).

Thankfully, the government ended up agreeing with the protesters, at least in part, stating that there should be a full investigation before they can decide whether or not they should endorse the mining plans.

“However, [their promise to investigate] was not honoured and, after a few days, the Provincial Government gave endorsement to MAC and INC to operate in one of the best conserved biocultural paradises found in the Philippines, and in South-East Asia as a whole,” explains a recent press release from the ALDAW Network.

Clearly an act of Bad Faith, the endorsement brings vast areas in Palawan, a UNESCO Man and Biosphere, one step closer to the harsh realities of unsustainable development.

It is especially harsh news because, ALDAW says, the mining areas of both companies are “located in ecologically valuable areas which include watersheds, hunting/agricultural grounds, extractive reserves of Non-Timber Forest Products (NTFPs) such as Almaciga (Agathis philippinensis) resin, on which upland indigenous communities depend for their daily subsistence. Also indigenous peoples’ sacred and worship sites are found within the mining tenements of these companies.”

“The area given out to mining concession is also inhabited by traditional indigenous Palawan having limited contacts with the outside. Moreover, the Gantong range and neighbouring areas where MAC and INC intend to operate are within the area recently declared as Mount Mantalingahan Protected Landscape, pursuant to Presidential Proclamation no. 1815,” continues ALDAW.

According to a spokesperson from Alyansa Tigil Mina, the largest anti-mining advocacy group in the Philippines, “Ironically enough, the mining companies and the politicians who are endorsing them have also infringed the Philippine Mining Act which prohibits mining in old growth or virgin forest, proclaimed watershed forest reserves, wilderness area, and other areas of outstanding environmental value”.

In addition, the Environmental Legal Assistance Center (ELAC), who is in the midst of taking the endorsement issue to court, says the government has also failed to meet the necessary “social acceptability requirements” and disregarded their own Strategic Environmental Plan (SEP, Republic Act 7611).

“The sustainable management of the entire Province is, in fact, governed by the SEP law which prohibits any human activity in those areas that are classified as ‘core zones’ and that – very unfortunately – are now part of MAC and INC mining tenements”, says ELAC Atty. Edward G. Lorenzo.

ALDAW further adds that, “Undoubtedly, the endorsement [has contravened] those provisions contained in well known conventions [e.g. The Convention on Biological Diversity (CBD) and the UN Declaration on the Rights of Indigenous Peoples] that the Philippine Government has already signed.”

Comments a member of the Palawan advocacy community: “When the Government itself infringes its own laws so bluntly, it means that the fundamentals of democracy are breaking apart and a new form of state-led terrorism is coming into being to deprive hundreds of farmers and indigenous peoples of their traditional, and thus legitimate sources of life, just to benefit a handful of greedy and irresponsible businessmen and their cronies”.

Even though the mining operations haven’t actually begun, Indigenous Peoples are already getting a taste of that “deprivation. An indigenous member from the community of Gieb (Barangay Maasin, Brooke’s Point Municipality) states that personnel from MacroAsia have “just entered our land without asking permission, and they removed our rice plants to excavate big ditches in our agricultural fields and also up into the mountains, only few meters away from the Balgtik (Agathis Philippinensis) trees that we sell and from which we depend for our survival”.

According to another member of the same community: “MacroAsia peoples have removed soil and trees also in those sacred forest that we call lylien and that are inhabited by powerful super-human beings (Taw Kawasa)”.

Lowland farmers have their own concerns about what will happen to their livelihoods, because the water they use for irrigation comes from the mountains where the mines are going to be situated. “Members of academic institutions have suggested that: unless these precious water catchments are protected from mining operations, at least 50% of Brooke’s point sustainable agriculture, which requires irrigation, might be lost,” says ALDAW.

Despite government’s callous disregard of its own legal system and the shameful infringements of both MacroAsia and the Ipilan Nickel Corporation, there is still a small chance the mining operations won’t get the coveted green light.

ALDAW explains that “On July 30, the members of the Palawan Council for Sustainable Development (PCSD) – a local government body in charge of the protection and sustainable management of the province – will meet to decide whether to issue a SEP clearance” on the mining operations.

This means “The future of one of the most pristine forests in the Philippines and the life of thousands of peoples who depend from it, is now in the hands of the Council.”

It is hoped that their hands will remain open, in the interests of conservation, preservation, and, of course, democracy.

Should they close them, the Indigenous Peoples and farmers who depend on Palawan, who are now faced with cultural and economic ruin, may very well have nothing left to lose.