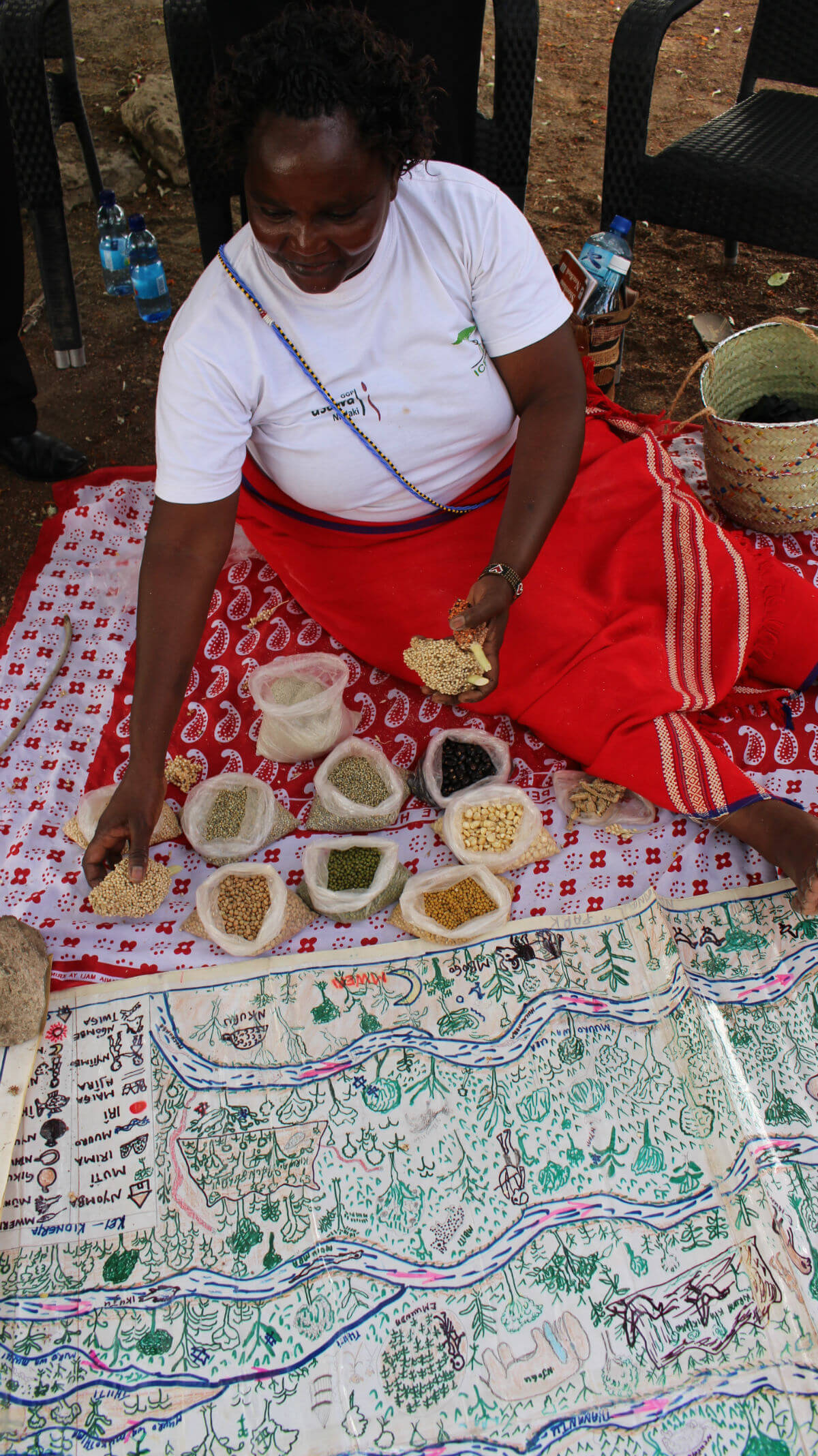 Our Roots, Our Responsibility

Indigenous Custodians call for recognition and protection of Sacred Natural Sites
Sabella Kaguna, a sacred site custodian from Tharaka, Kenya, with a map of her ancestral territory and indigenous seeds (Photo: The Gaia Foundation)
Support our journalism. Become a Patron!

Emerging out of a biocultural diversity revival movement that’s starting to build serious momentum across continental Africa, the statement forms the heart of a new report that builds the case for the African Commission on Human and Peoples’ Rights to do its part.

The new report, authored by The Gaia Foundation, African Biodiversity Network and human rights lawyer Roger Chennels, draws attention to the way that sacred natural sites and their community custodians have been systematically undermined and violated since the colonial era. Despite the official decolonization of Africa, this persecution continues today, say the authors, who have extensively documented the renewed scramble for Africa’s land, mineral, metal and fossil fuel wealth and its impact on Indigenous territories.

Source of knowledge, culture and Law

According to the new report, sacred sites are “Places of ecological, cultural and spiritual importance, embedded in ancestral lands”. They also play an important role in community conflict resolution practices and other traditions central to the cultural life of Indigenous Peoples.

In their statement custodians describe the centrality of sacred sites to their existence, writing that “Sacred natural sites are where we come from, the heart of life. They are our roots and our inspiration. We cannot live without our sacred natural sites, and we are responsible for protecting them.” 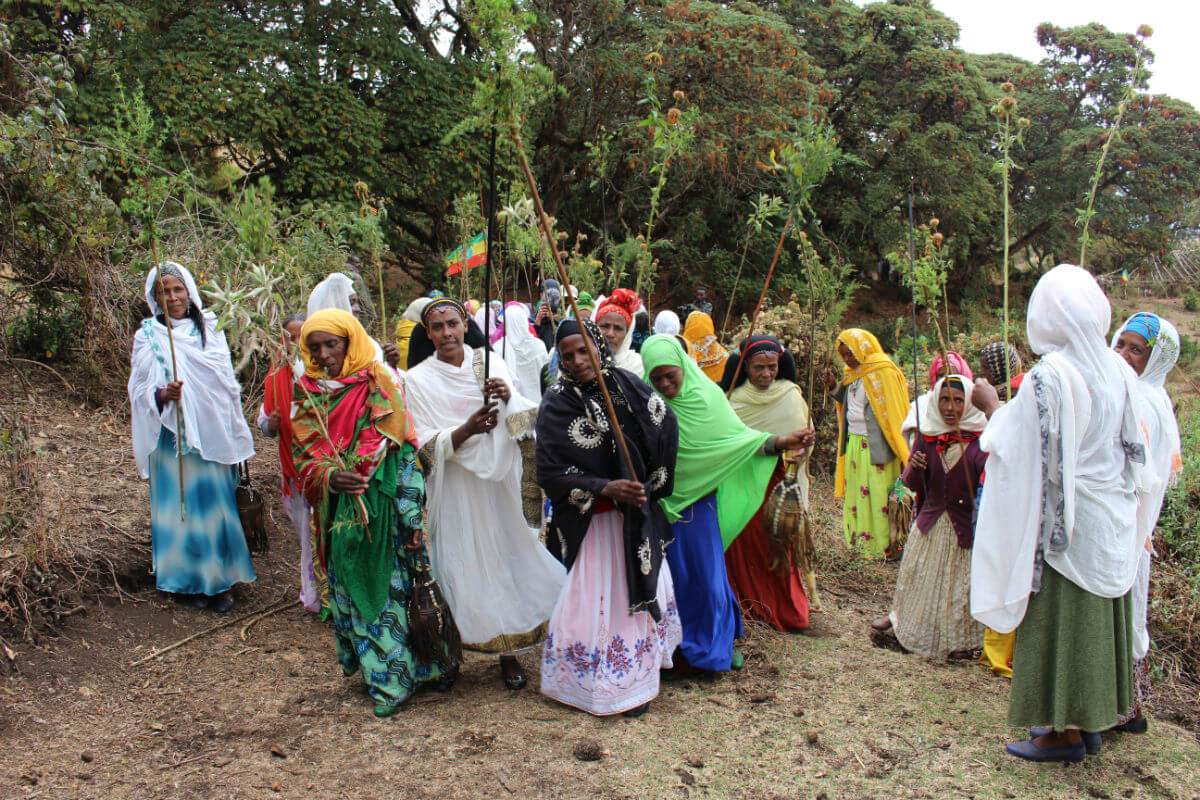 The custodians go on to outline in detail how sacred natural sites are the primary source of their laws and customary governance systems. Drawing together a list of common customary laws, the custodians demonstrate how these governance systems enable Indigenous Peoples to both protect their territories and maintain their ways of life and identities.

Quoting Beninese custodian Ousso Lio Appolinaire on the relationship between nature and culture, the report’s authors emphasize that a priori laws based upon and derived from the laws of the Earth underpin the great diversity of laws and customs practiced by Indigenous Peoples worldwide.

“In the beginning there was Nature; culture and indigenous knowledge come from Nature. Nature cannot be protected in a sustainable way without the culture of that place. The erosion of culture leads to the destruction of Nature. It is critical to conserve the culture and knowledge of our ancestors for good ecological governance in service of Nature”, says Appolinaire.

The custodians’ are calling for the African Commission to recognize and protect sacred natural sites on the basis that they are the foundations of the governance systems, cultures and values celebrated and enshrined in the African Charter.

The report discusses at length the commitment the African Charter makes to recognizing Africa’s legal plurality, including Indigenous People’s customary governance systems. Laying out a broad vision for an Africa free of colonialism, Articles 17, 18 and 61 of the Charter promote plurality and the traditional cultural values that, for custodian communities, are intimately tied to the existence and health of sacred natural sites.

In order to safeguard these rights, sacred natural sites must be protected, and the customary governance systems connected to them honored, argues the report.

The custodian’s statement intimates a critical need to protect sacred natural sites in accordance with the African Charter due to the interconnected crises of disappearing knowledge and increasingly devastated ecosystems. 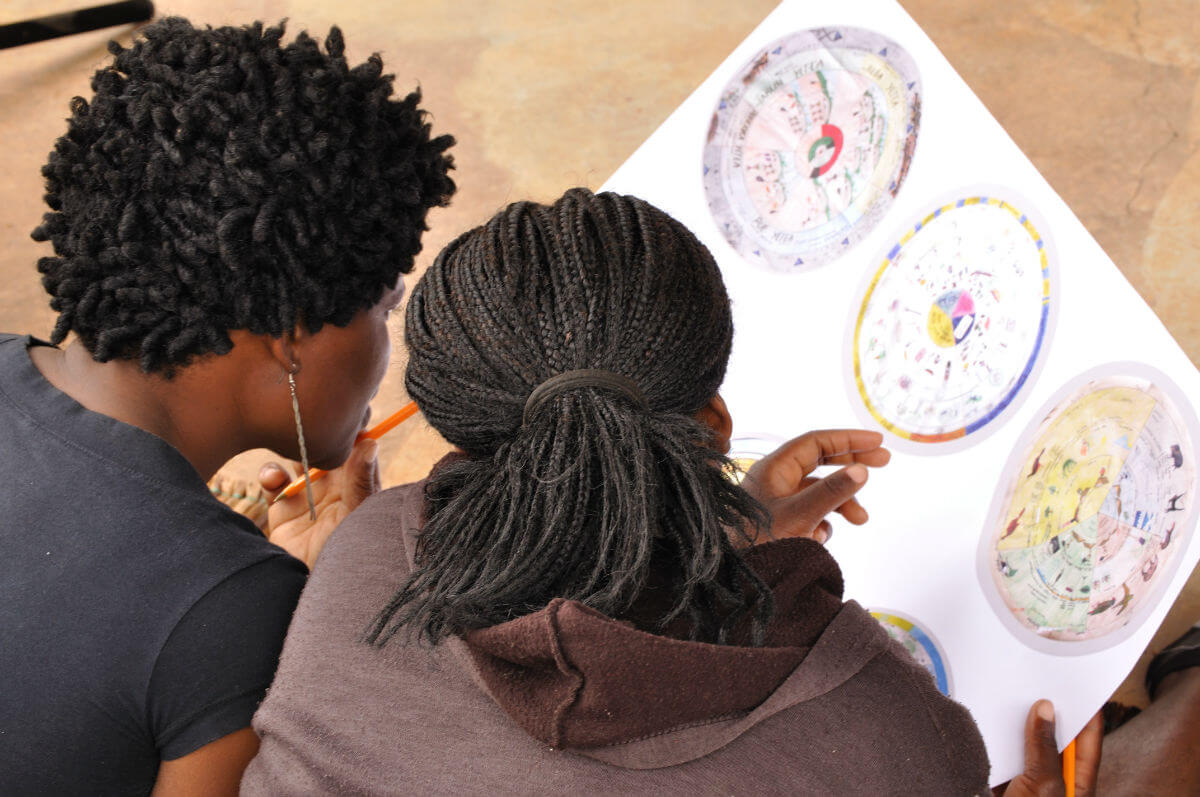 VhaVenda community members and their ecological calendar in Venda Limpopo. (Photo: Will Baxter)

“We are deeply concerned about our Earth because she is suffering from increasing destruction despite all the discussions, international meetings, facts and figures and warning signs from Earth… the future of our children and the children of all the species of Earth are threatened. When this last generation of elders dies, we will lose the memory of how to live respectfully on the planet, if we do not learn from them now,” say the custodians.

As remedy, the custodians describe a litany of destructive and disrespectful practices that sacred natural sites ought to be legally protected from. These include unwanted tourism, research and documentation, the use of non-indigenous seeds, land grabbing and financial speculation.

Special attention is given to the problem of extractivism, with custodians declaring sacred natural sites to be ‘No Go Areas’ for mining and other forms of destructive ‘development’. They write that “Sacred natural sites are not for making money. Our children need a healthy planet with clean air, water and food from healthy soils. They cannot eat money as food or breathe money or drink money. If there is no water, there is no life.”

“In my country sacred sites are holy places, they are not a place for infrastructural development. Those sites are kept by the community”, says Sabella Kaguna, a custodian from Tharaka in Kenya and one of the statement’s authors.

In order to ensure custodian communities are empowered to protect sacred sites on their own terms, the custodians are seeking legal parity. They write that they have observed how the dominant legal system in their home nations is operationalized to legitimize the destruction of sacred natural sites in contravention of their own laws and customs.

The report draws attention to examples of ‘multi-juridicial’ legal systems from around the world as examples of how indigenous legal traditions can be given greater parity. Describing the African Charter as ‘replete’ with references with legal pluralism and the need to respect ancestral legal systems, it makes the case for more wide-ranging and robust protection of these systems in African nations under the Charter.

Though the custodians’ statement calls for new actions from the African Commission and member states, at the grassroots level Indigenous custodian communities have been taking active steps to protect sacred natural sites for a number of years. 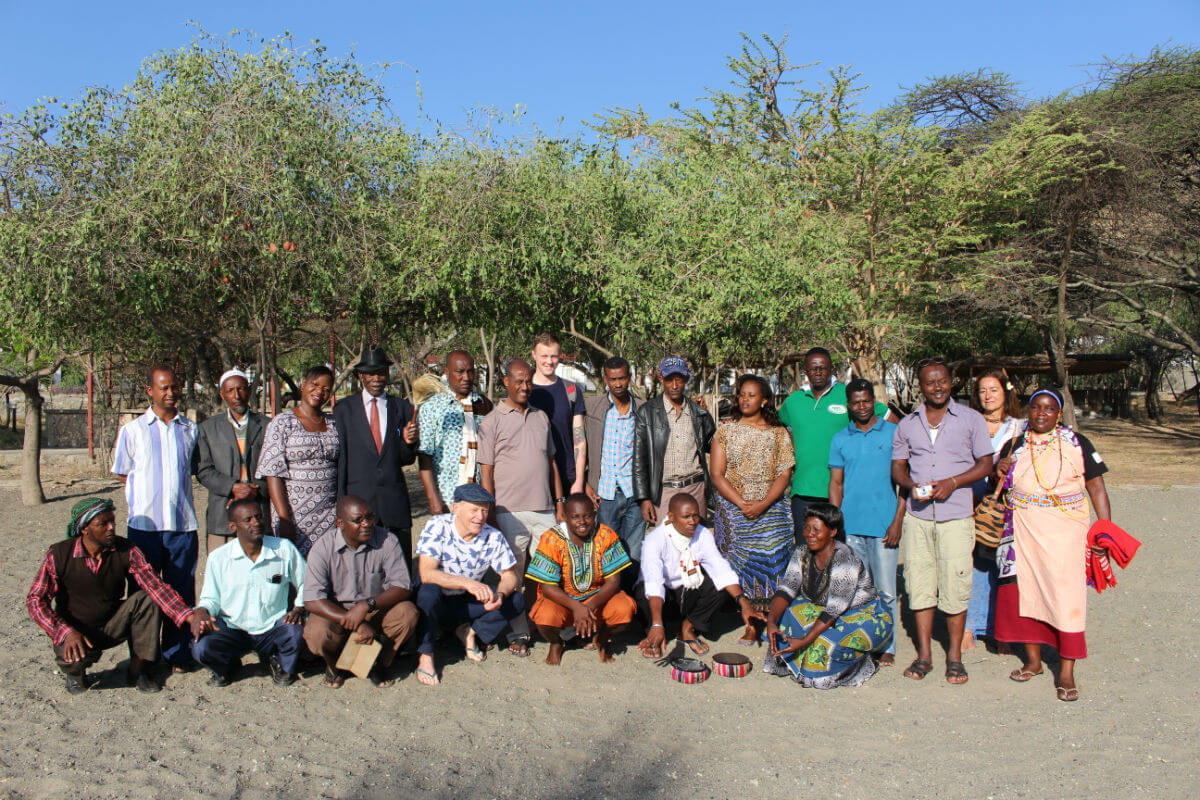 The report shares a number of case studies that showcase the success Indigenous communities have had in protecting sacred sites so far.

Benin is home to a network of sacred natural sites, known as Vodun zun, including over 2,940 sacred forests. In 2012, due in large part to the work of Indigenous-led organization GRABE-Benin, Benin set a new precedent by creating a ‘sacred forest law’ (Interministerial Order No.0121). The law formally protects sacred forests, recognizing their importance for biodiversity and ethno-cultural traditions. 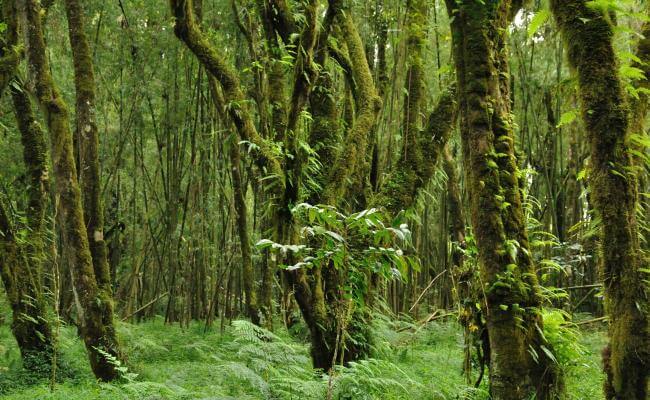 In the Sheka region of Southern Ethiopia, a region famous for rare afromontane forests, Shekacho communities have made great strides to protect the area’s 200+ sacred natural sites from threats such as deforestation.

With assistance from MELCA-Ethiopia, a local NGO, the communities have begun to revitalize their traditional culture, and clans have united to seek protection for sacred sites. As a result of these efforts, Sheka Forest was recognized as a UNESCO Biosphere Reserve in 2012. Since then, the regional government has issued a regulation for the protection of the Sheka forest Biosphere Reserve.

These successes are part of a wider process of Indigenous cultural revival under way across Africa. The report describes how communities such as those in Sheka and Benin are coming together to rebuild their cultural identities and customary governance systems. In doing so, they are challenging dominant legal systems that continue in the colonial vein of legitimizing eco-cultural destruction, rather than preventing it.

A new film from the report’s authors provides greater insight into this ongoing revival. In the film, Method Gundidza of the Mupo Foundation (South Africa) describes the critical importance of customary governance at a time of multiple eco-social crises:

The custodians and their supporters now hope their statement will impress this key insight upon the African Commission and inspire them to action. In the meantime, they will continue with their quiet revolution.