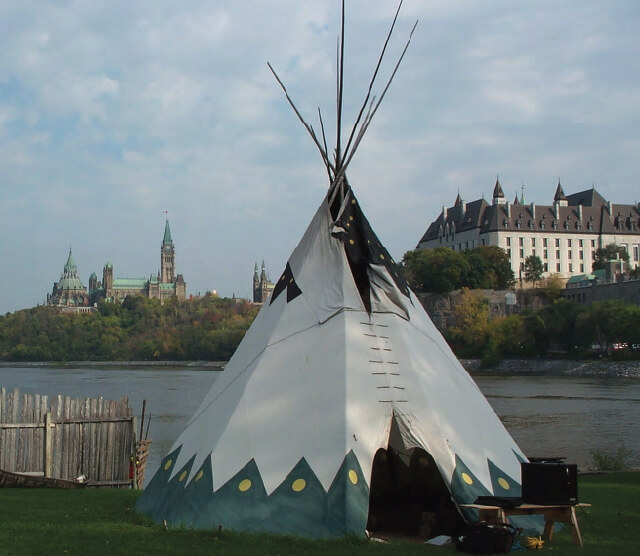 We are calling for your support to help us stop a high intensity urban development project within Akikodjiwan: a sacred Algonquin waterfalls area on the Ottawa River between the cities of Ottawa, Ontario and Gatineau, Quebec.

Since the early 19th century our sacred waterfalls area has been overrun by early colonial settlement on both northern and southern waterfronts, followed by log driving and then it was dammed for hydroelectric power to supply papermills that deforested our Algonquin homelands. Despite all of this Akikodjiwan remains a sacred waterfalls area for the Algonquin Peoples!

Recently, Windmill Development Inc. purchased the Chaudiere and Albert Islands from the logging company Domtar Inc. the lands border parcels of land owned by Hydro Quebec, the National Capital Commission, Public Works and the cities of Ottawa and Gatineau.

Our Algonquin First Nations were not legally or meaningfully consulted or accommodated on this matter as per the directions of the Supreme Court of Canada in the Haida, Delgamuukw or Tsilhqot’in decisions. Moreover, we are calling on all parties to respect the Articles of the United Nations Declaration on the Rights of Indigenous Peoples’, in this case Article 11, among others, clearly applies:

Indigenous peoples have the right to practise and revitalize their cultural traditions and customs. This includes the right to maintain, protect and develop the past, present and future manifestations of their cultures, such as archaeological and historical sites.

We do not agree with re-zoning the lands near our sacred area Akikodjiwan Kichi Zibi from parks and open space to mixed-use for the proposed Windmill Development. We also do not believe it is anyone’s interest to privatize those lands. We understand that an agreement between Domtar and the National Capital Commission to purchase those lands fell through several years ago.

The federal and Ontario governments should purchase those lands for return to an Algonquin controlled institution set up by legitimate Algonquin First Nations.

Moreover, we have just learned that the City of Ottawa’s Hydro Ottawa Inc. and its subsidiary Energy Ottawa has started construction on a new 29 megawatt hydroelectricity plant to replace the two existing generator stations at our sacred water falls, AKIKODJ IWAN KICHIZIBI (Chaudiere Falls, Ottawa River). Again, our Algonquin First Nations have never been consulted on this project. We strongly object to this project proceeding without our Algonquin First Nations first being consulted about this project.

We are calling for those islands and waterfront to be designated an Algonquin Cultural Park and Historic Commemorative Site and we are actively seeking national support for our Algonquin land use vision as a step towards reconciliation with our legitimate Algonquin First Nations, which we believe is consistent with the vision of the late Kitigan Zibi Elder, William Commanda who advocated for the return of this Algonquin sacred waterfalls area, including the Chaudiere, Albert and Victoria Islands.

Our request is in line with the following recommendations of the Truth and Reconciliation Commission:

43. We call upon federal, provincial, territorial, and municipal governments to fully adopt and implement the United Nations Declaration on the Rights of Indigenous Peoples as the framework for reconciliation.

44. We call upon the Government of Canada to develop a national action plan, strategies, and other concrete measures to achieve the goals of the United Nations Declaration on the Rights of Indigenous Peoples.

47. We call upon federal, provincial, territorial, and municipal governments to repudiate concepts used to justify European sovereignty over Indigenous peoples and lands, such as the Doctrine of Discovery and terra nullius, and to reform those laws, government policies, and litigation strategies that continue to rely on such concepts.

68. We call upon the federal government, in collaboration with Aboriginal peoples, and the Canadian Museums Association to mark the 150th anniversary of Canadian Confederation in 2017 by establishing a dedicated national funding program for commemoration projects on the theme of reconciliation.

79. We call upon the federal government, in collaboration with Survivors, Aboriginal organizations, and the arts community, to develop a reconciliation framework for Canadian heritage and commemoration. This would include, but not be limited to:

ii. Revising the policies, criteria, and practices of the National Program of Historical Commemoration to integrate Indigenous history, heritage values, and memory practices into Canada’s national heritage and history.

Further to the above cited TRC recommendations, our four Algonquin First Nations are looking for individuals, groups and organizations to ENDORSE OUR LIST OF DEMANDS in order to build pressure on the federal, provincial, municipal governments and corporations, particularly the Windmill Development Group.

Please send letters or resolutions of support to:

Please send copies of all support letters or resolutions to Ms. Brenda St. Denis at
forestry@wolflakefirstnation.com

1. The federal and Ontario governments should purchase the lands within our Algonquin Sacred Area for return to an Algonquin controlled institution set up by legitimate Algonquin First Nations.

2. The Algonquin Sacred Waterfalls Area Akikodjiwan must be protected in perpetuity and recognized within the National Capital Region as an Algonquin Nation Cultural Park and Historic Commemoration Site under an Algonquin controlled institution to be established by the legitimate Algonquin First Nations.

3. The governments of Canada, Quebec, Ontario, the National Capital Commission and the municipalities of Gatineau and Ottawa must contact the duly elected Algonquin Chiefs and Councils to negotiate the establishment of a proposed Algonquin Nation Cultural Park and Historic Commemoration Site under an Algonquin controlled institution to be established by the legitimate Algonquin First Nations. 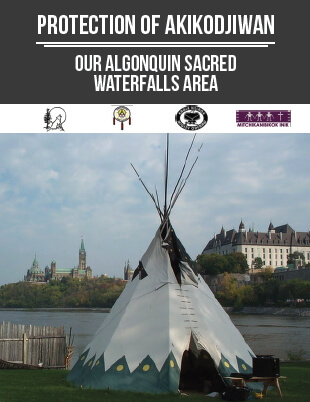