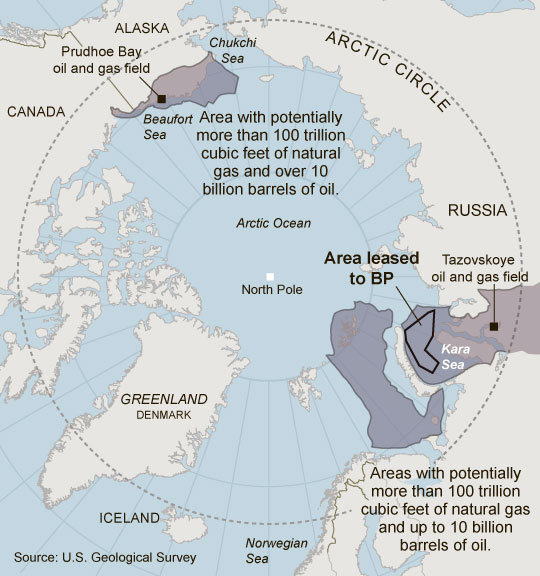 The final frontier. Now that Shell and BP are mere steps away from drilling exploratory wells off the Coast of Alaska and Russia, everyone’s playfully referring to the Arctic as the “final frontier” for petroleum development.

The notion of the Arctic being “undeveloped” or “undiscovered” probably couldn’t be more insulting to the Inupiat, Saami and other Indigenous Peoples whose cultures and subsistence ways of life evolved over centuries of living in the Arctic Circle.

Few people seem to be considering that fact, or even including Arctic Peoples in any debate over whether or not drilling should be allowed to proceed.

You can be sure that Shell and BP are glad of it, especially since their actions may be setting the stage for the destruction of the Arctic way of life.

In the case of Alaska, Shell is hoping to get started in July 2012, with four exploratory wells in the Beaufort Sea. The company has already spent more than $3.5 billion to acquire leases in both the Beaufort and Chukchi. It’s all worth it, says Pete Slaiby, vice president of Shell Alaska. After all, “There is a prize over there.”

According to the Washington Post, that so-called “prize” is 26.6 billion barrels of oil and 130 trillion cubic feet of natural gas in the Alaska outer continental shelf.

The risks that come with the prize are even greater, despite Shell’s “unprecedented spill response and cleanup plan for the Beaufort and Chukchi operations, including having cleanup crew and gear close enough to the drilling site that it could all be deployed in less than an hour,” as the Alaska Dispatch notes.

A new coalition made up of more than a dozen conservation groups say the plan just isn’t good enough. As the coalition points out on their website,”A major oil spill in the Arctic Ocean would be impossible to clean up and could have enormous consequences for the region’s communities and ecosystems. During the winter months, the Arctic seas are covered with ice and are not navigable by oil spill response ships. If a spill started as winter ice sets in, the oil could continue to gush into the sea and under the ice for eight long months.”

The coalition, which includes the Alaska Wilderness League, NRDC, Greenpeace, Oceana, and Defenders of Wildlife adds, “[a] cleanup in the Arctic would be hampered by sea ice, extreme cold, hurricane-strength storms and pervasive fog. The nearest Coast Guard facilities are nearly 1,000 miles away, and there is no port in the Arctic capable of serving large response vessels.”

To demonstrate the first point–how a cleanup would be hampered by sea ice, last month, Oceana released the video results of an oil spill response test from 2000. The results show what could occur if an oil spill happened in the Arctic waters.

The Coast Guard has issued its own warning against drilling, saying it wouldn’t stand a chance of cleaning up a spill if Shell’s response plan should fail.

“If this were to happen off the North Slope of Alaska, we’d have nothing, ” Admiral Robert Papp, the Coast Guard’s top official, told the Senate Committee on Commerce, Science and Transportation, earlier this year. The Admiral went on to say, “We’re starting from ground zero today.”

A zero point detonation isn’t so far fetched. With climate change heating the Arctic at an ever-increasing rate, an oil spill could have a drastic effect on the ecosystem as well as the Indigenous Peoples whose cultures and livelihoods are intertwined with it.

“REDOIL, Resisting Environmental Destruction on Indigenous Lands, is in opposition to the exploration activities of Shell Oil which have been approved by BOEMRE [The Bureau of Ocean Energy Management, Regulation and Enforcement], says Robert Thompson, an Inupiat resident of Kaktovik and the Chairman of REDOIL.

“The Inupiat culture has thrived for thousands of years. We have a close relationship with the bowhead whales and marine life of our region. Climate change is happening. The proposed activities, which lack a credible plan to deal with oil spills, if allowed, can have a devastating effect on our already stressed ecosystem. Our ecosystem and culture should not be put in jeopardy for the profit of a foreign oil giant.”

The risks are just as great in the South Kara Sea, off the coast of Arctic Russia.

BP and the Russian state company Rosneft are jumping head over heals to explore for oil and gas beneath the Kara Sea, an important fishing ground that’s normally frozen up to ten months a year.

According to the World Wildlife Fund (WWF), another member of the NGO coalition, the proposed joint effort violates the boundaries of two Russian national parks.

“Surely we are not so desperate for oil that we will tear down the boundaries of protected areas to get it,” Aleksey Knizhnikov of WWF-Russia said in a statement. “These protected areas are now in peril. The natural values they were set up to protect — pristine ecosystems, the seabirds, the polar bears, the marine mammals — are in jeopardy,” he added.

To the Saami, the plan is bitter a reminder of a dark colonial past. As NPR recently observed, “The northwest, around the port city of Murmansk, was pummeled by Adolf Hitler’s forces during World War II. The Arctic was also one of Soviet dictator Josef Stalin’s favorite places to send his perceived enemies, with gulags that dotted the snowy landscape… The indigenous people of this region bore much of the brunt.”

Even though they were forcibly collectivized under Stalin’s reign, the Saami have lived in relative peace for seeral decades, continuing their traditional way of life across Sápmi, a region that now encompasses northern Sweden, Norway, Finland, and the Kola Peninsula of Russia’s northwest.

But that’s all changing now, thanks to the worldwide race for oil and gas (drilling is also being proposed in the nearby Barents Sea and the North Sea off the coasts of Norway, Great Britain, Scandinavia, Belgium, and the Netherlands), not to mention Climate Change, the rise in military tension and that problem with nuclear waste in the Kara sea, right where Rosneft and BP want to drill.

“The Arctic is just so fragile,” says Saami spiritual leader Nadezhda Lyashenko. “This time, it’s a research boat going out there. It’s like the prick of a needle, and the land will heal. But if they go with knives, with spears, they could break everything. And then what?”

Hopefully, we won’t have to find that out.