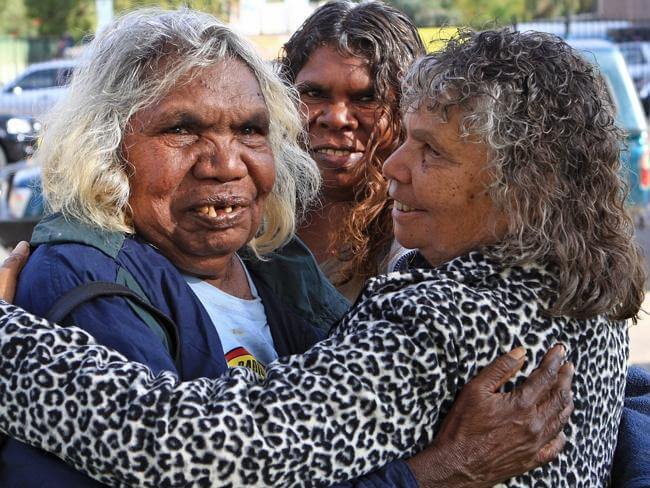 Muckaty traditional owners Doris Kelly, Gladys Brown and Elaine Peckham celebrate victory in their battle to stop the imposition of a nuclear waste dump. Photo via Friends of the Earth Australia.
Support our journalism. Become a Patron!

Australia’s nuclear industry has a shameful history of ‘radioactive racism’ that dates from the British bomb tests in the 1950s, writes Jim Green. The same attitudes have been evident in recent debates over uranium mines and nuclear waste, but Aboriginal peoples are fighting back!

The British government conducted 12 nuclear bomb tests in Australia in the 1950s, most of them at Maralinga in South Australia.

Permission was not sought from affected Aboriginal groups such as the Pitjantjatjara, Yankunytjatjara, Tjarutja and Kokatha.

Thousands of people were adversely affected and the impact on Aboriginal people was particularly profound.

Many Aboriginal people suffered from radiological poisoning. There are tragic accounts of families sleeping in the bomb craters. So-called ‘Native Patrol Officers’ patrolled thousands of square kilometres to try to ensure that Aboriginal people were removed before nuclear tests took place – with little success.

The 1985 Royal Commission found that regard for Aboriginal safety was characterised by “ignorance, incompetence and cynicism”. Many Aboriginal people were forcibly removed from their homelands and taken to places such as the Yalata mission in South Australia, which was effectively a prison camp.

In the late-1990s, the Australian government carried out a clean-up of the Maralinga nuclear test site. It was done on the cheap and many tonnes of debris contaminated with kilograms of plutonium remain buried in shallow, unlined pits in totally unsuitable geology.

As nuclear engineer and whistleblower Alan Parkinson said of the ‘clean-up’ on ABC radio in August 2002: “What was done at Maralinga was a cheap and nasty solution that wouldn’t be adopted on white-fellas land.”

Barely a decade after the ‘clean-up’, a survey revealed that 19 of the 85 contaminated debris pits had been subject to erosion or subsidence. The half-life of plutonium-239 is 24,100 years.

Despite the residual contamination, the Australian government off-loaded responsibility for the land onto the Maralinga Tjarutja Traditional Owners.

The government portrayed this land transfer as an act of reconciliation, but the real agenda was spelt out in a 1996 government document which states that the ‘clean-up’ was “aimed at reducing Commonwealth liability arising from residual contamination.”

Since 2006 successive federal governments have been attempting to establish a nuclear waste dump at Muckaty, 110 km north of Tennant Creek in the Northern Territory.

A toxic trade-off of basic services for a radioactive waste dump has been part of this story from the start. The nomination of the Muckaty site was made with the promise of $12 million compensation package comprising roads, houses and scholarships.

Muckaty Traditional Owner Kylie Sambo objected to this radioactive ransom: “I think that is a very, very stupid idea for us to sell our land to get better education and scholarships. As an Australian we should be already entitled to that.”

While a small group of Traditional Owners supported the dump, a large majority were opposed and some initiated legal action in the Federal Court challenging the nomination of the Muckaty site by the federal government and the Northern Land Council (NLC).

The politics is no less dirty

Yet after the 2007 election, the Labor government passed legislation – the National Radioactive Waste Management Act (NRWMA) – which was almost as draconian and still permitted the imposition of a nuclear dump with no Aboriginal consultation or consent. Hooray for hypocrisy!

In February 2008, Labor Prime Minister Kevin Rudd highlighted the life-story of Lorna Fejo – a member of the stolen generation – in the National Apology in Parliament House. At the same time, the Rudd government was stealing her land for a nuclear dump. Fejo said:

Shamefully, the NLC supported legislation disempowering the people it is meant to represent.

Muckaty Traditional Owners were determined to stop the dump and they have been supported by the Beyond Nuclear Initiative; a pro bono legal team led by legal firm Maurice Blackburn; the Australian Nuclear Free Alliance; key trade unions including the Australian Council of Trade Unions; church groups; medical and public health organisations; local councils; the Australian Greens; and environment groups such as Friends of the Earth, the Australian Conservation Foundation and the Environment Centre NT.

The Federal Court trial finally began in June 2014. After two weeks of evidence, the NLC gave up and agreed to recommend to the federal government the withdrawal of the nomination of Muckaty for a nuclear dump.

The Coalition government led by Prime Minister Tony Abbott accepted the NLC’s recommendation. Abbott – who describes himself as the political love-child of John Howard–might have been called to appear at the trial had it continued.

As a result of their surrender, the NLC and the government did not have to face cross-examination in relation to numerous serious accusations raised in the first two weeks of the trial – including claims that the NLC rewrote an anthropologists’ report.

Leading the battle against the dump were the Kupa Piti Kungka Tjuta, a council of senior Aboriginal women from northern SA. Many of the Kungkas personally suffered the impacts of the British nuclear bomb tests at Maralinga and Emu in the 1950s.

The proposed dump generated such controversy in SA that the federal government hired a public relations company. Correspondence between the company and the government was released under Freedom of Information laws.

The sand-dunes were removed from the photo, only for the government official to ask if the horizon could be straightened up as well. ‘Terra nullius’!

In 2003, the federal government used the Lands Acquisition Act 1989 to seize land for the dump. Native Title rights and interests were extinguished with the stroke of a pen. This took place with no forewarning and no consultation with Aboriginal people.

Victory in the Federal Court

The Kungkas continued to implore the federal government to ‘get their ears out of their pockets’, and after six years the government did just that.

In the lead-up to the 2004 federal election – after a Federal Court ruling that the federal government had acted illegally in stripping Traditional Owners of their native title rights, and with the dump issue biting politically in SA – the Howard government decided to cut its losses and abandon the dump plan.

The Kungkas wrote in an open letter: “People said that you can’t win against the Government. Just a few women. We just kept talking and telling them to get their ears out of their pockets and listen. We never said we were going to give up. Government has big money to buy their way out but we never gave up.”

Senator Nick Minchin, one of the Howard government ministers in charge of the failed attempt to impose a nuclear dump in SA, said in 2005:

“My experience with dealing with just low-level radioactive waste from our research reactor tells me it would be impossible to get any sort of consensus in this country around the management of the high-level waste a nuclear [power] reactor would produce.”

Minchin told a Liberal Party council meeting that “we must avoid being lumbered as the party that favours nuclear energy in this country” and that “we would be political mugs if we got sucked into this”.

One example concerns the 1982 South Australian Roxby Downs Indenture Act, which sets the legal framework for the operation of BHP Billiton’s Olympic Dam uranium mine in SA.

The Act was amended in 2011 but it retains exemptions from the SA Aboriginal Heritage Act. Traditional Owners were not even consulted. The SA government’s spokesperson in Parliament said:

“BHP were satisfied with the current arrangements and insisted on the continuation of these arrangements, and the government did not consult further than that.”

That disgraceful performance illustrates a broader pattern. Aboriginal land rights and heritage protections are feeble at the best of times. But the legal rights and protections are repeatedly stripped away whenever they get in the way of nuclear or mining interests.

Thus the Olympic Dam mine is largely exempt from the SA Aboriginal Heritage Act. Sub-section 40(6) of the Commonwealth’s Aboriginal Land Rights Act exempts the Ranger uranium mine in the NT from the Act and thus removed the right of veto that Mirarr Traditional Owners would otherwise have enjoyed.

New South Wales legislation exempts uranium mines from provisions of the NSW Aboriginal Land Rights Act. The Western Australian government is in the process of gutting the WA Aboriginal Heritage Act 1972 at the behest of the mining industry.

Native Title rights were extinguished with the stroke of a pen to seize land for a radioactive waste dump in SA, and Aboriginal heritage laws and land rights were repeatedly overridden with the push to dump nuclear waste in the NT.

Most of those laws are supported by the Liberal / National Coalition and Labor. Radioactive racism in Australia enjoys bipartisan support.

Muckaty Traditional Owners have won a famous victory, but the nuclear war against Aboriginal people continues – and it will continue to be resisted, with the Aboriginal-led Australian Nuclear Free Alliance playing a leading role.

Article originally published at The Ecologist. Republished with permission.