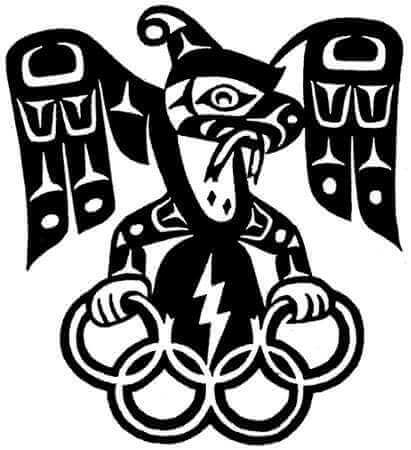 We hold the Canadian government, the British Columbian (BC) and Canadian Judicial systems working in conjunction with VANOC responsible for death of Indigenous Elder and Warrior Harriet Nahanee[1], and acknowledge her death and the persecution of Indigenous dissent as a direct result of the Canadian Government’s objective to drive out opposition in order to make room for the Olympics 2010.

There can be no justification for the incarceration and resulting death of esteemed Indigenous Elder, Harriet Nahanee, a strong voice for her people at a time when many are afraid to speak out in the light of the criminalization of dissent.

This is but one example of how the build up to the Olympics 2010 is affecting life in Coast Salish and other Indigenous territories in BC.

The Winter Olympics is set to commence on February 12-27th 2010. Already today in 2007 Indigenous people, the poor, the homeless and those who live on the land are experiencing the affects of the Games. The vast destruction of mountains, old growth forests, streams, hunting and fishing grounds and delicate ecosystems in which are relied on by Indigenous people; the closures of social housing and low income hotels; the high and increasing rate of homelessness; and the criminalization of Indigenous people and the poor are all part of the lead up to the 2010 Olympics.

Indigenous communities in the interior and the coast of British Columbia including the Secwepemc people of Skelkwek’welt, the St’at’imc of Sutikalh, the Pilalt of Cheam and have been critiquing and resisting the objectives and activities of the 2010 Olympics since 2000. The threat and reality of new ski-resort development in the province has prompted other groups, such as the Nlaka’Pamux Nation in defense of the Coquihalla to take action. In all of these communities hundreds of millions of dollars have been spent to build new and expand existing ski-resorts in order to accommodate tourists and Olympian trainers for 2010. The mega-development on these Indigenous lands has already disrupted hunting and fishing grounds and destroyed sacred sites.

In the Downtown Eastside of Vancouver (which is home to an overrepresentation of Indigenous people) 514 low-income housing units were lost between June 2003 and June 2005. Almost 300 low-income housing units have been lost in the same time period to rent increases. Over 126,000 people in 56,000 households in Greater Vancouver are at risk of homelessness according to the 2001 Canada census. The massive influx of tourists in 2010 will encourage the closures of more low-income housing and advance gentrification in order to accommodate and appease the hungry visitors.

Those who have stood up to defend their lands have been deeply criminalized by the Canadian state. So far there have been hundreds of arrests of Indigenous people (with an emphasis on Indigenous youth and Elders) who have protested Olympics 2010 and its objectives. While some Native leaders, as part of the ‘Four Host First Nations’ have given their ‘ceremonial blessings’ to the 2010 Olympics and have gained economically (Mt. Currie and Squamish Indian Act bands were given 20 million dollars for development in Whistler alone), many Indigenous people realize the political reality – that many of our people have to endure brutal conditions when disposed of land, on the street, in unfit living conditions, and in prison as a result of the Olympics 2010.

It is important not to confuse ‘ceremonial blessings with genuine political consent’.

Indigenous people have not given their consent to the Olympics 2010 that is set to take place on Stolen Unceded Native Land. Indigenous People have made it clear that we will not be bought and sold-out.

The International Indigenous Youth Network stands against the destruction of the land, the non-recognition of Indigenous sovereignty and inherent rights, poverty, homelessness, and criminalization that the Olympics 2010 has brought and will bring.

The International Indigenous Youth Network Stands in Solidarity with actions and resistances of Native Warrior Societies, organizations, groups, communities, individuals and allies who are committed to their opposition of the Olympics 2010.

The International Indigenous Youth Network is committed to revitalizing our spirit, strength, and solidarity in defending our inherent rights and responsibilities to our traditional lands against imperialist globalization, and all threats to the very existence of indigenous peoples.

In the Spirit of Resistance and Solidarity,

[1] Harriet was a Pacheedaht grandmother, Elder, and an Indigenous Warrior who had married into the Skwxwu7mesh (Squamish) Nation. She was one of the only Indigenous protesters protecting the Eagle Ridge Bluff site on Coast Salish Territory where people were protecting the site that was slated to be destroyed to expand the Sea to Sky Highway for the 2010 Olympics.

For asserting her Indigenous rights as an Indian under the Canadian Constitution and for refusing to apologize for her blockade action, on January 24th, 2007, despite her frail health, Harriet was sentenced to fourteen days in the Surrey Pretrial Centre, a men’s prison and a notorious hell-hole for women. Despite the pleads of Betty Krawcyzk, Madame Justice Brenda Brown sentenced Mrs. Nahanee, aged 72, to fourteen days incarceration for contempt of court in disobeying the Eagle Ridge Bluff injunction. While in jail, under unacceptable conditions at Surrey Pre-Trial Centre, where she was held in a cell with tens of other inmates and subject to racist treatment, Harriet Nahanee contracted pneumonia. She was hospitalized within a week of her release from custody and passed away within a week. The atrocity of her unjust death points to the racism, brutal human rights violations and contempt for Indigenous people that characterizes the Canadian judicial system. It is also a blatant demonstration of the current state of colonization in Canada. see here for more info