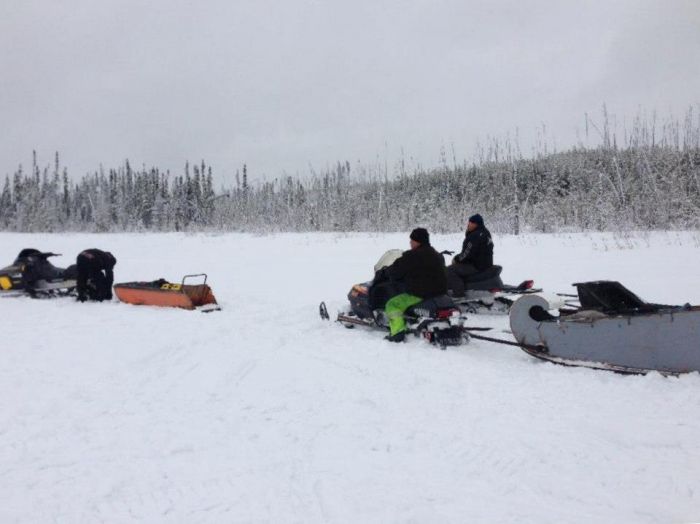 No Home on the Range: Indigenous resistance to the Cold Lake Air Weapons Range

In April 2013, a group of Buffalo River Dene Nation members traveled into the Cold Lake Air Weapons Range, hauling materials to build cabins. Plans for more trips and activities inside the air weapons range are underway (Photo credit: BRDN—Keepers of the Land)
Support our journalism. Become a Patron!

BEAUVAL, SASKATCHEWAN—On a clear day in northwestern Saskatchewan, the jets are visible on the horizon. Flying in formation, they veer west and drop down below the boreal forest treeline and over a vast weapons range before landing back at the military base.

The Cold Lake Air Weapons Range (CLAWR) was established on traditional Dene and Cree lands 60 years ago. Today, Indigenous land defenders are taking action to get the territory back.

Spanning 11,700 square kilometres along the Alberta-Saskatchewan border, the CLAWR—also known as the Primrose Lake Air Weapons Range—covers an area larger than Lebanon or Jamaica. Indigenous inhabitants and land users were evicted when the range was established in 1953, during the Cold War. Canada’s only tactical bombing range, the CLAWR is also now home to oil and gas extraction activities and an Enbridge pipeline.

For decades, bomb and missile target practice has taken place on lands held sacred by Indigenous locals. “My great-great-great-grandfather is buried there on a point on that lake where they bomb,” Brian Grandbois of the Cold Lake First Nation told The Dominion.

Captain Jean-François Lambert, a media spokesperson from Air Force Public Affairs, of the Department of National Defence, alleged in an email to The Dominion that “gravesites identified on the range have had fencing erected around them, and all elements of the natural habitat surrounding them have remained undisturbed.” Grandbois tried to bring the issue of gravesites bombing to the attention of NATO, whose member nations conduct international air force training exercises at the CLAWR on an annual basis, but received no response.

Outside the northeast reaches of the CLAWR lies the Buffalo River Dene Nation, whose members elected Lance Byhette as band council chief in March 2013. Byhette pulls no punches when it comes to his position on the air weapons range.

“We’ve waited long enough,” he told The Dominion. Two members of his community were charged in 1994 for hunting and trespassing inside the CLAWR. Despite an initial court victory, the hunters eventually lost their case. A new class-action lawsuit against the federal government is in the works. But Buffalo River Dene Nation members aren’t limiting their actions to the courtroom. “After having several meetings with people that got charged and community meetings, we’ve decided to take back the territory,” said Byhette in a telephone interview.

In April 2013, people got together to defy the military restrictions and began making trips into the northeastern part of the CLAWR. They began preparations to build cabins, openly engaging in traditional land use activities and actively asserting their rights to their territory. Using the group name BRDN–Keepers of the Land, Buffalo River Dene Nation members, along with residents of nearby hamlets St. George’s Hill and Michel Village, are forging ahead with activities focused on reclaiming their land.

“We cut a trail to the air weapons range and we did take some lumber over there in the winter, while there was still snow on the ground. We took a contingent of approximately 17 to 20 people—well, in total, 30 people that were involved with the transportation and stuff like that—and we took skidoos out there, we recut the line, we made a trail, and we’ve delivered all of the housing material to Watapi Lake, which resides—supposedly—in the Cold Lake Air Weapons Range border,” said Byhette.

The Department of National Defence considers the actions trespassing. “The danger posed by the dropping of weapons has not abated,” wrote Lambert. “Unauthorized access by anyone to the Cold Lake Air Weapons Range, is deemed trespassing, and can be extremely dangerous due to past or current range operations.”

The CLAWR encompasses Treaty 6, Treaty 8 and Treaty 10 lands—traditional hunting, trapping, fishing and gathering territory for several surrounding Dene and Cree First Nations, as well as nearby Métis communities. Questions, meetings and claims gained momentum in the 1970s, after the initial 20-year lease agreement signed in 1953 by the governments of Canada, Alberta and Saskatchewan quietly expired.

Over the next three decades, a spate of claims filed through the Indian Claims Commission, negotiations and inquiries took place. Canoe Lake First Nation settled in 1995. Cold Lake First Nation settled for $25 million in 2001. And in 2004, four Métis communities to the east of the CLAWR accepted $19.5 million total, paid out over five years, from the governments of Saskatchewan and Canada. But Byhette insists Buffalo River Dene Nation doesn’t plan to settle. “We’re not looking for compensation,” he said.

Not everyone in the surrounding Métis communities and First Nations was happy with the deals signed on their behalf by elected leadership, ceding historic claims to CLAWR lands in exchange for money. Grandbois, whose ancestor’s grave is a target in air weapons testing, and other Cold Lake First Nation members, including elders, were outspoken opponents of the impending deal within the community back in 2001.

“I remember it very well because I was fighting against it, and on October 16, 2001, my late mother was in the hospital in Edmonton, passing away from leukemia, and the Chief and Council from Cold Lake went to visit her in the hospital when I was there. And later that day I found out that they were signing away the air weapons range deal. That’s why they were all in Edmonton,” said Grandbois, a long-time land defender, in an interview with The Dominion. A rise in oil company activity on the air weapons range began not long after, he said. “They waited for the signing for Cold Lake, and then the corporate machine started rolling.”

People have known for decades that the CLAWR overlaps with the Cold Lake tar sands deposits and other hydrocarbon resources. The Alberta government was studying oil sands deposits in the northwest corner of the CLAWR back in the mid-1970s, concluding that there was potential for heavy oil and gas projects in the area. Grandbois recalls that he and others had no idea that an explosion of oil development would almost immediately follow the Cold Lake First Nation’s deal.

Husky Energy, Cenovus and Canadian Natural Resources Limited now have tar sands and heavy oil projects within the CLAWR, and Enbridge is twinning its Athabasca oil pipeline, which runs right through the range.

But because of the lack of public access and the secrecy surrounding the military installations, few people have been aware of any accidents or spills related to oil development in the range. On June 25, 2013, the Alberta Energy Regulator (AER) launched a new incident-reporting tool to provide public information regarding pipeline and energy-related incidents on its website. Two days later, on June 27, 2013, the AER reported that bitumen had been leaking at one of the tar sands extraction projects inside the CLAWR.

“If there was a spill in there just recently, that’s the first time I hear of it like that,” said Grandbois, when asked about the leak. He spoke to The Dominion during a short break from packing up his camping gear at a Denesuline gathering at Palmbere Lake at the end of June 2013.

Less than a month later, the AER issued a news release, ordering the suspension of Canadian Natural Resources Limited’s operations within one kilometre of the June 2013 spill and placing restrictions on operations throughout the company’s Primrose North and South operations. This suspension was not the first time this year the provincial regulator had imposed restrictions on the Calgary-based resource company due to spills. “Earlier this year, as a result of three releases of bitumen emulsion to surface, the AER ordered the suspension of steaming operations within the Primrose East section of the project area,” reads the July 18, 2013 news release.

“To clarify, we have always reported on all incidents under the former Energy Resources Conservation Board, but in annual publications,” AER Public Affairs spokesperson Bob Curran wrote in an email to The Dominion. “However, the three incidents that occurred in late May and early June would have been captured in the new online reporting protocol.” There was also an incident in January 2009, wrote Curran.

Canadian Natural Resources Limited issued a press release on July 31, 2013, providing an update on the status of its operations. “The four locations initially impacted at Primrose covered an area of 20.7 hectares,” reads the company statement. Sixteen birds, seven mammals and 38 amphibians have been found dead. More than one million litres of bitumen emulsion have been recovered, according to the press release, but it continues to seep up to the surface at a rate of approximately 3,000 litres per day.

Cold Lake First Nation elder Sam Minoose has seen many of the impacts of military and industrial pollution for himself, but he still hunts moose in the CLAWR when he can. Cold Lake First Nation members are permitted to hunt inside the CLAWR on weekends, from Friday at 6:00 pm until Sunday at 6:00 pm, unless there are military activities going on. With oil development picking up in areas surrounding the CLAWR as well, there is almost nowhere left to pursue traditional hunting and gathering activities.

“When I was on Council in 1990–1994, I went to Ottawa and requested the government to establish some kind of Land Commissioner so they could interview our People regarding that bombing range area, ’cause we wanted—we wanted our territory back,” Minoose, a former Cold Lake First Nation band councillor, told The Dominion. Minoose said that, since the Cold Lake First Nation’s settlement in October 2001, oil companies have pretty much been running the show.

Over on the eastern side, plans for more trips and activities inside the CLAWR are underway. “We’ll see what happens in the near future, but we’re not gonna back down,” said Buffalo River Dene Nation Chief Byhette. “It’s time to take back our territory.”

Read a backgrounder with a chronology of tar sands spills inside the CLAWR here.

Sandra Cuffe is a vagabond freelance journalist currently based up in northern Saskatchewan.

This article was originally published at The Dominion / Media Coop