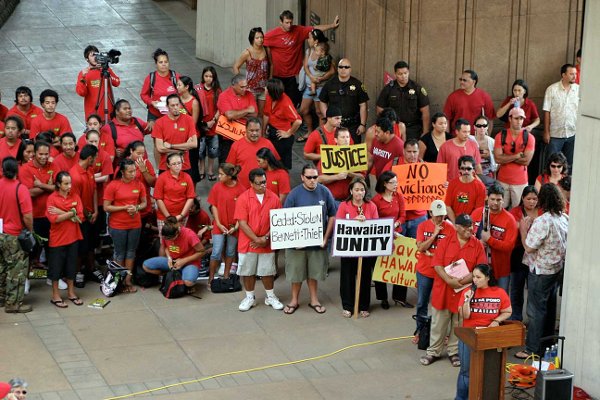 The Ilio’ulaokalani Coalition, with the support of Kupu’aina, is organizing a massive rally in Hawai’i to oppose the alienation of 1.2 million acres of ‘ceded lands’ once held by the former Hawaiian Kingdom.

The rally is set to take place on January 17, just a few weeks before the U.S. Supreme court will decide on whether or not to uphold the Hawai’i Supreme Court’s January 2008 ruling, which barred the government from alienating the territory until the land claims of Native Hawaiians have been resolved.

“Many in the Native Hawaiian community saw the opinion [of the court] as a positive step or ho’oholo i mua towards reconciliation and as encouraging Native Hawaiians, the larger community, and those with differing perspectives to continue a dialogue not only on the use and disposition of ceded lands, but also on Native Hawaiian self-determination,” says Toni Auld Yardley from the Kanakamaoli Religious Institute.

The Court further recognized “that money reparations in lieu of the lands themselves would not be an adequate remedy because of the inextricable bond between the Native Hawaiian people and the ‘Aina [land],” continues Yardley.

“‘Aina is a living and vital part of the [n]ative Hawaiian cosmology, and is irreplaceable. The natural elements – land, air, water, ocean – are
interconnected and interdependent. To [n]ative Hawaiians, land is not a commodity; it is the foundation of their cultural and spiritual identity as Hawaiians. The ‘aina is part of their ‘ohana [family], and they care for it as they do for other members of their families. For them, the land and the natural environment is alive, respected, treasured, praised, and even worshiped.”

In April 2008 the State of Hawai’i appealed the Court decision, arguing that “the state holds and owns these lands for the benefit of all of the people of Hawaii” — a claim that does not sit with the Hawaiian people. The US Supreme Court agreed to hear the appeal last October.

As many as 50,000 people are expected to attend the rally.