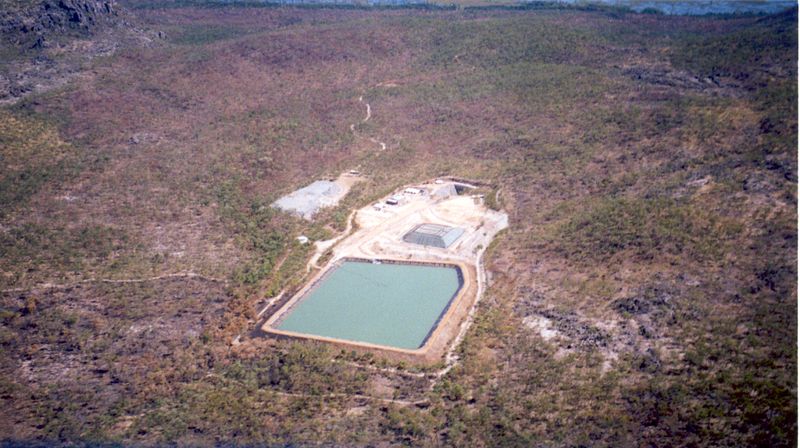 Aerial view of the Ranger Uranium Mine (and Jabilkua uranium deposit) in Kakadu National Park. Photo by and ©2002 Dustin M. Ramsey
Support our journalism. Become a Patron!

The Mirarr People have renewed their opposition to the multibillion-dollar Jabiluka uranium deposit in Australia’s Northern territory, declaring their wish, in solidarity with the people of Japan, to include the deposit as part of the UNESCO world heritage-listed Kakadu National Park.

In a recent letter to UN Secretary-General Ban ki-Moon (PDF), Mirarr Elder Yvonne Margarula lamented the fact that uranium from the existing Ranger uranium mine in Kakadu is likely present in the stricken Fukushima nuclear power plant.

“It was with great sadness that we Mirarr People of the World Heritage listed Kakadu National Park in the Northern Territory of Australia learned of the suffering of the Japanese people due the recent earthquake, tsunami and nuclear crisis. Our thoughts and prayers are with the people of Japan at this most difficult of times. We hope that individuals, families, communities and the nation may rebuild their lives. We also hope for a speedy resolution to the ongoing Fukushima nuclear emergency,” she states.

Margarula, whose father warned the Australian government in the late 1970s that a dangerous power called Djang “might kill all over the world” if disturbed at the Ranger site, hopes the UN Secretary-General will consider her viewpoint and her father’s words.

For many thousands of years we Aboriginal people of Kakadu have respected sacred sites where special and dangerous power resides. We call these places and this power Ojang. There is Ojang associated with both the Ranger mine area and the site of the proposed Jabiluka mine. We believe and have always believed that when this Ojang is disturbed a great and dangerous power is unleashed upon the entire world. My father warned the Australian Government about this in the 1970s, but no one in positions of power listened to him. We hope that people such as yourself will listen, and act, today.

The Ranger mine has been wrought with troubles ever since it went into operation in 1981. According to the Environment Centre, “over 100 environmental errors and breaches of operating codes have been recorded” since then. The mine has been particularly plagued with water management problems, which a major concern for the Mirarr, since “some 12 million litres of radioactive contaminated water lies on site at the Ranger Uranium Mine, upstream of Indigenous communities and internationally recognized Ramsar listed wetlands,” explains Margarula, in her letter to the Secretary-General.

The company behind the Ranger mine, Energy Resources of Australia (ERA) was recently forced to suspend production at the mine due to major concerns of flooding. It’s likely the mine will stay closed for the remainder of 2011.

However, despite the ongoing and “persistent problems”, ERA, which is owned by Rio Tinto, hopes to expand the mine and begin using controversial acid heap leach technology.

“The ongoing operations at Ranger, combined with renewed pressure for expansion, threaten the natural and cultural values for which Kakadu is listed as World Heritage,” states Justin O’Brien executive officer of Gundjeihmi Aboriginal Corporation (GAC), a Mirarr organization established to support the Mirarr people. “ERA’s current difficulties highlight the company’s inability to safely manage its existing operations and cast serious doubts over its capacity to manage any expansion.”

At the same time, Rio Tinto still wants to get started on the nearby Jabiluka deposit, which is one of the world’s largest known untapped uranium deposits. Development of the Jabiluka mine was halted in 1998 after an eight-month blockade by some 5000 indigenous and non-indigenous protesters.

In a remarkable move by any industry standard, in 2005, ERA signed the Jabiluka Long-Term Care and Maintenance Agreement guaranteeing that the the Mirarr would have veto rights over any future ‘development’ at Jabiluka.

In light of what’s happening at the Fukushima plant, not to mention the persistent problems at the Ranger mine and the ongoing risk of contamination at Kakadu, the Mirarr are now hoping to exercise that right.

Rather than become overnight billionaires, as the press points out, the Mirarr want the uranium to stay where it belongs: in the ground, where it can’t harm anyone, and so future generations have it to protect.

You can also learn more about Kakadu at http://www.sacredland.org/kakadu/