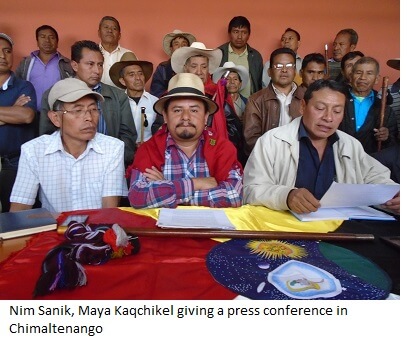 Photo by Josue Navarro
Support our journalism. Become a Patron!

GUATEMALA – On September 4th, after ten days of widespread street protests against the biotech giant Monsanto’s expansion into Guatemalan territory, groups of indigenous people joined by social movements, trade unions and farmer and women’s organizations won a victory when congress finally repealed the legislation that had been approved in June.

The demonstrations were concentrated outside the Congress and Constitutional Court in Guatemala City during more than a week, and coincided with several Mayan communities and organizations defending food sovereignty through court injunctions in order to stop the Congress and the President, Otto Perez Molina, from letting the new law on protection of plant varieties, known as the “Monsanto Law”, take effect.

On September 2, the Mayan communities of Sololá, a mountainous region 125 kilometers west from the capital, took to the streets and blocked several main roads. At this time a list of how individual congressmen had voted on the approval of the legislation in June was circulating.

When Congress convened on September 4, Mayan people were waiting outside for a response in favor of their movement, demanding a complete cancellation of the law –something very rarely seen in Guatemala. But this time they proved not to have marched in vain. After some battles between the presidential Patriotic Party (PP) and the Renewed Democratic Liberty Party (LIDER), the Congress finally decided not to review the legislation, but cancel it.

Lolita Chávez from the Mayan People’s Council summarized the essence of what has been at stake these last weeks of peaceful protests as follows: “Corn taught us Mayan people about community life and its diversity, because when one cultivates corn one realizes that there is a variety of crops such as herbs and medical plants depending on the corn plant as well. We see that in this coexistence the corn is not selfish, the corn shows us how to resist and how to relate with the surrounding world.”

The Monsanto Law would have given exclusivity on patented seeds to a handful of transnational companies. Mayan people and social organizations claimed that the new law violated the Constitution and the Mayan people’s right to traditional cultivation of their land in their ancestral territories.

Antonio González from the National Network in Defense of Food Sovereignty and Biodiversity commented in a press conference August 21: “This law is an attack on a traditional Mayan cultivation system which is based on the corn plant but which also includes black beans and herbs; these foods are a substantial part of the staple diet of rural people.”

The new legislation would have opened up the market for genetically modified seeds which would have threatened to displace natural seeds and end their diversity. It would have created an imbalance between transnational companies and local producers in Guatemala where about 70 per cent of the population dedicate their life to small-scale agricultural activities. That is a serious threat in a country where many people live below the poverty line and in extreme poverty and where children suffer from chronic malnutrition and often starve to death.

The law was approved in June without prior discussion, information and participation from the most affected. It was a direct consequence of the free trade agreement with the US, ratified in 2005. However, recently the protests started to grow and peaked a couple of weeks ago with a lot of discussions, statements and demonstrations.

At first the government ignored the protests and appeared to be more interested in engaging in superficial forms of charity like provision of food aid while ignoring the wider and structural factors that cause and perpetuate poverty in Guatemala such as unequal land distribution, deep rooted inequalities, racism, to name but a few.

But soon enough they decided to act. Even though politicians claimed not to act on social demands, it is without doubt a decision taken after enormous pressure from different social groups in society.

There was a great risk that the Monsanto Law would have made criminals of already repressed small farmers who are just trying to make ends meet and doing what they have done for generations – cultivating corn and black beans for their own consumption. The Monsanto Law meant that they would not have been able to grow and harvest anything that originates from natural seeds. Farmers would be breaking the laws if these natural seeds had been mixed with patented seeds from other crops as a result of pollination or wind, unless they had had a license for the patented seed from a transnational corporation like Monsanto. 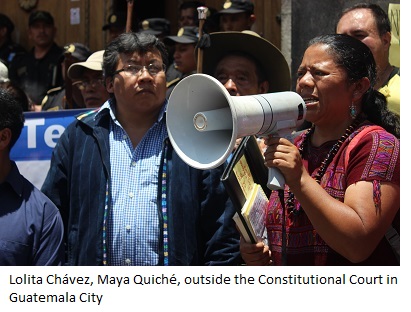 Another risk expressed by ecologists was the fear that the costs for the patented seeds would have caused an increase in prices and as consequence caused a worsened food crisis for those families who could not afford to buy a license to sow.

Academics, together with the Mayan people, also feared that the law would have intensified already existing fierce social conflicts between local Mayan communities and transnational companies in a country historically and violently torn apart.

Currently international companies are very interested in gaining control of the abundant and rich natural assets that Guatemala possesses. There is just one problem: the Mayan people – or actually most people – in Guatemala do not agree with a policy of treating nature like a commodity to be sold off piece by piece, especially when they receive nothing in return. It is very difficult to argue that it is a rentable business for Guatemalan society as a whole, and less the local communities, when it is a rather small but powerful economic elite which benefits on behalf of the environment, nature and society.

So what happens when the people organize in defense of their territory? The international companies call the government and have them use whatever means necessary to remove those standing in their way so they can construct megaprojects like mines or hydroelectric dams or extend monocultures in any region they see fit without much concern for those who might be affected.

Last month three men were killed when police used violent force to evict a community whose population had organized itself to protest against a hydroelectric megaproject in their community in Alta Verapaz. Hundreds of police officers were sent to the area on orders from the Ministry of Home Affairs, Mauricio López Bonilla. It was not an exceptional case by any means.

As for the Monsanto Law, for a chilling reminder of where this was most likely headed, one need look no further than the USA: according to information from Food Democracy Now, a grassroots community for sustainable food system, Monsanto’s GMO Roundup Ready soybeans, the world’s leading chemical and biotech seed company, admits to filing 150 lawsuits against America’s family farmers, while settling another 700 out of court for undisclosed amounts. This has caused fear and resentment in rural America and driven dozens of farmers into bankruptcy.

It is impossible to predict how this controversy might unfold, but the reality in Guatemala today is one marked by an ongoing conflict between the government and the Mayan people, who constitute over half of the population.

Nim Sanik, Maya Kaqchikel from Chimaltenango comments on the victory over the Monsanto Law: “The fight to preserve collective property of Mayan communities such as vegetable seeds, which historically have served as a source of development and survival for the Mayan civilization, is a way to confront the open doors that the neoliberal governments have widely open in favor of national and transnational corporations that genetically modify and commercialize the feeding of mankind. We have just taken the first step on a long journey in our struggle to conquer the sovereignty of the people in Guatemala.”